Book Review: Doctor Who: Touched By An Angel - Jonathan Morris 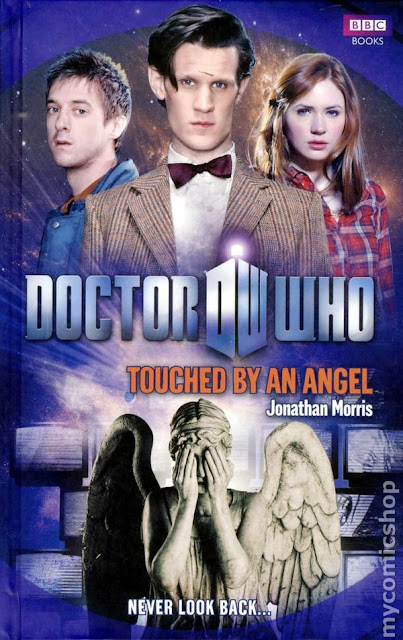 In 2003, Rebecca Whitaker died in a road accident. Her husband Mark is still grieving. Then he receives a battered envelope, posted eight years ago, containing a set of instructions and a letter with a simple message: "You can save her." Later that night, while picking up a takeaway, Mark glances at a security monitor - to see himself, standing in the restaurant in grainy black and white. And behind him there's a stone statue of an angel. Covering its eyes, as though weeping... except, when Mark turns, there's nothing there. As Mark is given the chance to save Rebecca, it's up to the Doctor, Amy, and Rory to save the world. Because this time the Weeping Angels are using history itself as a weapon...

I collect the David Tennant-era 10th Doctor BBC DOCTOR WHO books, and have read the majority of them (and even listened to the ones that Tennant himself narrates on audio book [a treat, I guarantee you]). I liked those books more often than not as decent DW stories with which to fill the time between watching the show.

As only the second expanded universe/tie-in media book that I’ve read with Matt Smith’s 11th Doctor (and Amy & Rory) Jonathan Morris DOCTOR WHO: TOUCHED BY AN ANGEL had some making up to do. The first of the 11th Doctor books I read was Michael Moorcock’s DOCTOR WHO: THE COMING OF THE TERRAPHILES, which felt less like a DW book, and more like a random sci-fi book starring caricatures of The Doctor and Amy. It was not good.

So when I grabbed DW: TOUCHED BY AN ANGEL I did so based on the fact that the enemy of the piece was…dunh dunh dunh…the Weeping Angels of course! I also liked the sound of the plot about a man who’s wife has died 8 years previously, and he receives a letter from himself claiming that he can “Save Her!” It sounded like a great adventure.

And it is, but there are a few things working against Morris here. The first of those is that The Weeping Angels are Steven Moffat’s brilliant invention, and the last time we saw them on the show was FLESH & STONE and THE TIME OF THE ANGELS two-parter from Series 6 (arguably the best outings on that Series altogether). Morris also has to contend with the fact that attempting to subvert and defeat the Weeping Angels requires a keen mind if it’s going to avoid the pitfalls of repetition, but I’ll get to that.

Basically the Angels here are kind of an amalgam of the scavenger Angels from BLINK, and the more advanced and vigorous ones from Series 6. These Angels are searching for a paradox to feed on, and widower Mark Whitaker is the perfect choice since if given the option of saving his wife he will go to any length to do it, even creating a big, messy [tasty] paradox. Of course The Doctor knows this is bad and with Amy and Rory in tow they set out to prevent this, while trying to help Mark (both a past and present version of him) in the process.

The pacing is great and the story clips along quite well, though there are moments of “Amy did this, and then she did this, and then this” but it wasn’t as often as it could have been so I was okay with it. A lot of time is spent on both Mark’s and that’s the key to enjoyment here since it is his story, which will tug at your emotions. And that’s the main reason why this book can stand above a lot of DW books, since so often they descend into fighting the monster and ignoring the people involved. Mark is as front and center to the proceedings as the Doctor and Co. are so for that Morris ought to be applauded.

Two things fell a bit short for me. Firstly, Morris’ voice for both Amy and Rory ring very true to the characters as they are played on the show. Sadly, his Doctor is less so. Matt Smith’s voice is a difficult thing to capture in word form properly, and though Morris does an admirable job and there were definitely a few 11th Doctor-isms on display here I found that there were passages where the Doctor said things that didn’t really ring true. In a DOCTOR WHO book that is tough to overlook since it’s a key element of the show. The second thing I didn’t much care for is when and how they defeat the Angel’s. It’s a variation on the way they were beaten in BLINK. While not exactly that, it was close enough for me to groan a bit. I’ll admit to early on having the notion that it might have been a rogue Angel sending Mark back in time to HELP him save his wife…but sadly that was not to be, brave though it would have been to take a villain and create a rogue one who does a good thing.

Other than that, this book succeeds on the laurels of the story through and through. So much attention is paid to Mark’s story that the Doctor and Co. almost seem peripheral, and here that really works. Like a Doctor-lite episode. The Doctor did get to invoke a very lovely line that shows respect for the original Angel story where he talks about a past package set up by the person to give to their future selves and calls it “The Full Sally Sparrow Set” and I really loved that bit.

A decent outing for the 11th Doctor, Amy, Rory and a story that will definitely pull at your heartstrings (I always like my DW with emotion best). Is it better than the best of the Tennant-era books? It is better than a few of them certainly, but not better than others. If I am ranking though, this would definitely be in the top 5 of all the ones I’ve read, so that’s probably saying something. As far as DOCTOR WHO books, you could do very well by yourself to read this one.

Posted by GunMetalBlue at 6:06 AM