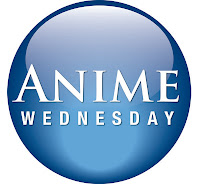 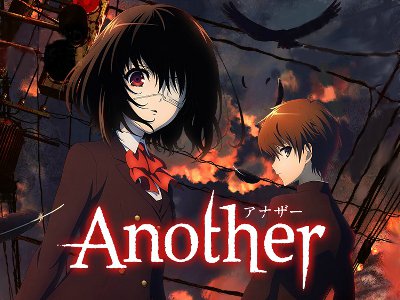 Note from Scott: I have asked fellow blogger/anime fan Little Red Reviewer to write up a short piece for a bonus edition of our Anime Wednesday feature this month and she graciously obliged, and wrote the following piece. So, without further adieu our first proper guest post!

Due to health problems, Kouichi Sakakibara has transferred to a new Middle School out in the country. His father is travelling for business, so Kouichi stays with his grandparents and his Aunt. This is the town his mother grew up in, maybe his aunt can tell him more about the mother who died when he was born. His first few days in town are spent at the hospital, where he befriends a nurse and a quiet girl named Mei Misaki who wears an eyepatch and claims to be visiting someone in the morgue.

When Kouichi starts school a few days later he immediately notices Mei Misaki is in his class! She sits in the back row at an old beat up desk, and everyone ignores her. Sometimes she doesn’t even show up to class, or disappears half way through. Kouichi’s first few attempts at speaking to Mei are sabotaged in one way or another, and his classmates begin acting strangely towards him, telling him not to speak to people who don’t exist.

Don’t exist? Is Mei a ghost? can anyone else see her? If she is a ghost, what’s the harm in speaking to her? And if she isn’t a ghost, what is she?

The more Kouichi tries to find out about what is going on, the more dangerous his life becomes. He witnesses a fellow student tripping down the stairs and falling to her death, is on the phone with a friend when there is a fatal elevator crash, and classmates keep hinting about the curse of their class. A curse that’s been going on for nearly thirty years. Kouichi does his best to get information about what’s going on, he even asks his aunt if she remembers anything about when she was at that high school. But the only person who seems to know anything is Mei. 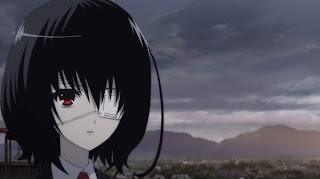 There is a curse, and Mei is at the center of it. As Kouichi spends more time with her, he finds himself isolated and ostracized by the rest of the class. This curse is a deadly phenomenon, how long can Kouichi survive? If his life is in danger, can he count on anyone beside Mei to save him?

A suspenseful horror thriller, Another will keep you on the edge of your seat. The first few episodes do a wonderful job of introducing important characters and setting the atmosphere of the show. Complete with horror movie music, the end of each episode comes way too soon. If at first the storyline seems a little confusing, give it a few more episodes. The curse is eventually completely explained, yet knowing what’s going on does soften the blows of the horrific things that happen.

Typical of horror thrillers that focus around teenagers, the adults are conspicuously missing. Teachers at the school don’t seem to care that there are many deaths involved with a specific class of students, and parents do not seem involved in their children’s lives. This is completely atypical of what life is really like in Japan, but I’ve seen a lot of horror shows that seem to have this dynamic.

If you enjoy suspense, Another is a show for you! There is very little in the way of “in jokes” that reference other shows or Japanese otaku culture, so the show is highly accessible to viewers new to anime.
Posted by GunMetalBlue at 8:13 AM