With a lack of DOCTOR WHO on the air (and no sign of it till next Fall) and all three SHERLOCK episodes for Series 2 having already aired, I think I may have needed a new obsession TV show. Sure, I watch a bunch of the current staples of Prime Time North American TV…but let’s face facts and accept that if Scott is going to really get fanboyish about a TV show, it will more than likely be a British one.

So, in a perfect storm/confluence: my British co-worker gushing about it, and the first three Series being available for $19.99 each (13 episodes a piece) on iTunes, I decided to finally give BBC’s MERLIN a go.

Not only was I pleasantly surprised by the quality of it, but also it seemingly fits snugly between the ensemble genius of BUFFY and the writing and charm combo of DOCTOR WHO. If there was ever a show for me to get excited about, I think it was bound to be MERLIN…I just didn’t know it until I sat down with it.

I have had the entire last week (and weekend) on my own as my girlfriend has been away on vacation with her family. Somewhere around Thursday evening of last week I bought and downloaded Series 1. I watched two episodes that night and although the first episode leaned a little into the “cheesy” area, the second episode showed me that there might be a heart and a quality here to see. So Friday night I watched a few more and got up to episode 6 and probably somewhere in the 5th episode (one that focuses on Merlin helping Lancelot who’s newly come to Camelot join the Knights by forging documents that made him nobility, which he wasn’t) that I knew I was watching something great. Here is a show that was apparently the creator’s attempt (according to them) to make a SMALLVILLE-style show about a well known heroic personage, but tell the story of that person’s youth. What’s funny is that SMALLVILLE never got out from under its cheesy premise, and instead got mired in it. MERLIN only takes a few episodes before rising above the cheese and becoming something altogether more endearing and certainly more watchable.

The actor’s portraying the leads are really great across the board. Colin Morgan and Bradley James play young Merlin and Arthur respectively and both actors do so with the right balance of youthful exuberance with hints at future greatness…without beating you round the head with that. Angel Coulby plays a very understated (at least in Series 1) Guinevere and what’s truly lovely about her performance is when we get to Series 2 (which I have begun to watch) and see her start to blossom into a person we can see as future queen. Speaking of BUFFY, Anthony Stewart Head plays Uther Pendragon, Arthur’s father and king of Camelot. He plays the role to the hilt, and gives Uther such an unrepentant personality that you can’t help but hate him from episode to episode for A. Being so against magic that he has outlawed it and kills anyone associated with it and B. Being a stubborn ass about most things. Where that really strikes home though is on the odd episodes where he shows compassion or has to reign himself in as king, and showcases how the way Head is playing him is perfection. Probably my favourite main character is Morgana played by Irish actor Katie McGrath. Apart from being quite stunningly gorgeous, she also plays the role with the best balance between brooding, simmering upset and loving, friendly ward. For in this version of the tale she is the Ward of Uther and quasi-love interest for Arthur…but she begins to have magic-induced seer-like dreams/nightmares and slowly begins to realize that she can use magic…and ward or not Uther would have her put to death if he knew. She is, for lack of a better word, mesmerizing when she is on screen. I can’t wait to see where they take her story, as I know it can’t turn out well…but I flat out LOVE the dynamic that they’ve brought her onto the side of good, at least right now as it makes a tale that’s been told a hundred times, much more interesting. Scottish thespian Richard Wilson plays court physician (and Merlin guardian) Gaius and does so with a respectable verve and graveness…though he is one character I didn’t get truly involved with until the end of the Series, at which point he becomes much better. We should also mention that there is a great dragon who has been imprisoned deep below the keep by Uther (who feared its magic), whom Merlin befriends and who is voiced by the always amazing John Hurt. That’s another character that starts out as a very basic portrait (prophetic dragon who helps Merlin realize his destiny), but as the episodes go on he develops layers and depth I wholly wasn’t expecting. As a last but not least mention, though she only appears in four episodes, Michelle Ryan’s turn as old magic priestess/sorceress Nimueh is stunningly realized and she works really well as the chief antagonist for Series 1. I truly think that though the narrative, charm and execution of MERLIN is what will get you watching, the characters and the actors who portray them are what will make you stick around. 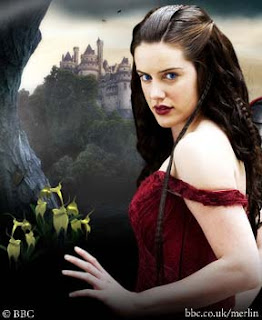 The special effects are another thing I’d like to make note of. Where North American shows seem to skimp the most when it comes to genre material it is definitely in the special effects department. Basically anything on Syfy or any other channel that shows genre titles is treated with less respect than is due and those seemingly are given less funds with which to produce special effects, or they companies they are hiring are just doing a poor job. Here, special effects company THE MILL (the astonishing people behind GLADIATOR, DOCTOR WHO, TORCHWOOD) were given the ticket and the BBC has paid close attention to making sure the effects look almost film-quality. Magic spells, creature’s and even creature’s shadows are dealt with in a lovingly detailed way that just helps the show. North American channels and producers could (as is usual) learn something from the BBC and showrunners here. If you are going to make a genre show, then spare no expense and the audience will appreciate it.

I think the BBC initially underestimated the fanbase for MERLIN since after Series 1 they gave Series 2 only a 10 episode order (as opposed to the normal 13)…but eventually overturned that idea and extended it to the full 13. They commissioned Series 3 and then 4…but somewhere in there we’d heard rumors of cancellation. Those rumors were likely again a complete false window into fandom since MERLIN fans have slowly become as rabid as DOCTOR WHO fans are. The 5th Series begins shooting in the next two weeks (in Pierrefonds, France which doubles for Camelot), and at San Diego Comic Con this past year the showrunner’s mentioned that if fandom stayed at this high level then a 6th Series would likely be a certainty.


The music is the last thing I wanted to note. In today's TV line-up there is a LOT to be said for really good television scores. With GAME OF THRONES, DOCTOR WHO, DOWNTON ABBEY and the like getting high, high marks and attracting film composer quality work, MERLIN is no different. Veteran TV and Film composer Robert Lane has approached MERLIN with a cinematic ear and has crafted a score that is both quiet and introspective (when the opening theme music tinkles quietly as an emotional heart-string pull) and boisterous and glorious (showcased biggest in a scene of the LANCELOT episode) you can't help but love the music across the board. I'd even go so far as to say it is worth purchasing, if you enjoy scores.

When I was halfway through the 1st Series I fell in love with this show and immediately bought and downloaded Series 2 & 3, for further consumption. I think Series 4 is almost completely up on iTunes as well and I will be buying that. It’s nice to know that I have so much ahead of me to catch up, but I feel I should also slow down since once I catch all the way up I’ll have to wait till fall for new episodes.

If you aren’t watching this show, you should be. It is a genre show, done right and without a huge budget. It is charming, action packed, approachable and at times can be quite emotionally resonant. The BBC have outdone themselves and given themselves another flagship show for its audiences…but moreover they have given us fanboys and fangirls something to truly sink our teeth into.
Posted by GunMetalBlue at 8:06 AM