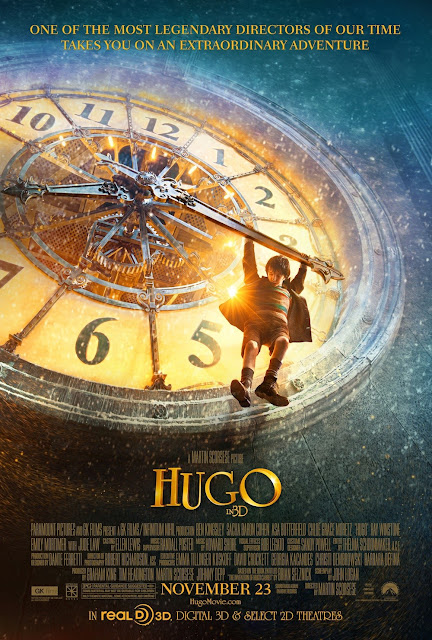 On the weekend I finally got out to see HUGO, a film I had been trying to get out to see for weeks since I’d heard such good things. Of course, with last week’s Oscar Nominations and HUGO leading the pack with 11, the theatre was absolutely rammed for the matinee. I was pleased by such a large turnout at this late date after the film was released.

HUGO is a film that is about a number of things. It is about Paris, books, loss, happiness, wonder, cruelty and most of all it is about film itself. Martin Scorsese, most well know for his mature film fare, takes a shot at directing a children’s/family film and scores big time.

It’s not often that I walk out of a movie and feel really, truly good. A movie that can make you smile from ear to ear hours after the fact is a good movie. For frame of reference, AMELIÉ, MY NEIGHBOR TOTORO and LOVE ACTUALLY all make me feel that way. I can now add HUGO to that list, as I thought it was about as wonderful and whimsical as a film can get.

The film is about Hugo Cabret, the orphaned son of a clockmaker, who lives in the walls of the Paris Train Station thieving and hiding from the station guard to survive. He thieves from an older man who runs a toy shop in the station and gets caught, losing the notebook his father kept about a mysterious, broken mechanical man/automaton to the toyshop owner. Stemming from his attempts to recover the beloved notebook, Hugo meets Isabelle (goddaughter of the toyshop maker) and the two begin an adventure that will lead them across Paris, into the inner workings of the train station, and into the very heart of early filmmaking. That’s the extent I am willing to give you of the plot, since I’d rather not spoil anything.

The actors in the film play a myriad of characters that pepper the landscape of the train station with flair and charm. There is the clumsy, war-wounded Inspector Gustav (Sacha Baron Cohen), the woman he is crushing on who is a flower stand owner Lisette (Emily Mortimer), the bookshop owner Monsieur Labisse (Christopher Lee), the café owner Madame Emile (Frances De La Tour), the newspaper seller Monsieur Frick who can’t seem to get close to her (Richard Griffiths), right down to the more main characters or Isabelle (played wonderfully by Chloe Grace Moretz) and her cranky toyshop owner godfather (played by the ever amazing Ben Kingsley). Hugo and this large cast of larger-than-life characters populate the day-to-day life of the train station to such a degree that as a viewer you are sucked immediately into 1930’s Paris and whisked away on the wings of the story. Hugo himself (played expertly by newcomer Asa Butterfield) is our guide and his past and present make for compelling storytelling that you won’t want to blink an eye and miss.

Scorsese has done what I didn’t think was possible. In a popular culture filled with a glut of children’s films and family films that simply have little charm beyond their initial ideas he has taken a beloved book (THE INVENTION OF HUGO CABRET by Brian Selznick) and crafted a charming, magical movie that would make even the adults in the theatre grin with wonder and cheer. In fact, not since the HARRY POTTER films have I been this impressed with a children’s/family film, and what that continues to show me is that when prolific, well-received directors turn their eye toward making this type of film then it is almost always a success. I welcome more of such films, since I’d like one day to be able to take my children to films that will whisk them away and dazzle them the way that HUGO has the capacity to do.

The 3D (a feature I am never too sure of going in) was stunning, not at all overbearing, and well shot. The design of the film is simply marvelous and really brings 1930’s Paris to life, this includes the outside shots, and even the inside ones. Nice touches like having Django Reinhart playing the guitar in a little street performer cameo, or the playbills to 30’s-era art were quite well placed nods to the time. I think the thing you might walk away with most is just how hard Scorsese and his team worked to create an utterly believable Paris of the day, have it be totally charming, and then use it to tell an emotionally resonant, captivating story.

Howard Shore’s score is as incredible as you assume it would be from someone like him. It is both quiet and emotive, and thunderous and exciting in equal measure. You won’t find a note out of place.

HUGO is worth every accolade that it has earned thus far. It is everything that people are touting it to be, and succeeds as not only being relevant, but entertaining and the kind of film that will only impress you further the more you think about it. It’s been two days since I saw it and I already want to go back and see it again. For a film to not only capture audiences and critics alike, but to be the front-runner of many Awards shows as well might seem a bit unbelievable, but trust me when I say that you would be hard-pressed to have seen much better than HUGO in 2011.
Posted by GunMetalBlue at 7:13 AM