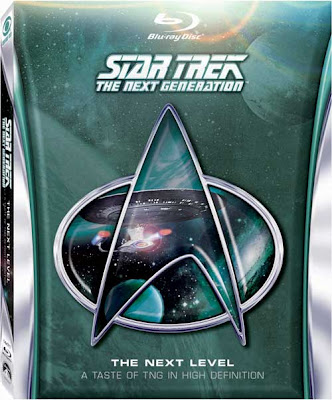 Starting later this year (Date not yet confirmed), CBS Home Entertainment will be re-releasing the entire STAR TREK: THE NEXT GENERATION series on Blu Ray. The great part is that since the show was actually entirely shot on 35mm film and then mastered to video for TV release, this means we can get actual proper 1080P transfers from the film itself (as opposed to the tape masters). The challenge there is that the film was not edited, and is technically all still rough, so the team has had to go back and re-edit directly from the film exactly as the episodes were (when they aired between 1987 and 1994), and have also gone through and re-composited every special effect (as opposed to simply upconverting from the video masters), and the audio has also been transferred to HD 7.1 DTS Master Audio.


I sat there like a rapt teenager again. Stunned.

I don’t have many other words to describe it. I had planned to watch maybe one or two of the three (technically four) episodes, and ended up watching all of them. Contained on the sampler disc are: ENCOUNTER AT FARPOINT (S1 Pilot), SINS OF THE FATHER (S3), and THE INNER LIGHT (S5) to show what exactly this hard work has been for and just why you would want to re-buy the Series (in case you already owned it all on DVD). I’ve seen a few people say that there really isn’t much reason to re-buy the series, and I can understand that sentiment, since we’ve been subjected to some pointless re-releases of things in our time. We’ve been burned and the chances we would take on dropping this kind of coin a second time are slimmer than you’d think. So CBS had to not only impress with this project, but they basically have to blow us away. They have done this in spades.

The Picture quality is stunning. The colours are all punchy and bright, the blacks are clean and not murky, and there is a bit of film grain to add a realism to the process. The one worry I had going into a true 1080P HD transfer was that the special effect makeup. Could it hold up under the scrutiny of HD? Surprisingly, it does! Worf’s makeup, Picard’s old man makeup in THE INNER LIGHT, and even the rest of the Klingon’s on SINS OF THE father hold up perfectly. There are no visible seams and or other noticeable defects, which just shows the standard that the crew initially went to on the show for quality. The aspects of HD that will pop out at you are things like in the opening credit sequence when the Enterprise goes by the screen you can see people moving about through the tiny bridge windows. That is something I never noticed when it aired on TV, nor when I watched it on DVD. That really impressed me. I’m sure it’s always been there, but the clarity has just never been high enough for us to see it.

The sound is great as well. It’s not necessarily the quality of some recent films on Blu Ray, but it is far better than it’s ever been before and crystal clear. In fact, getting to watch and hear the opening sequence on this disc was a real treat and made me grin from ear to ear. The lossless audio made me appreciate that sequence far more than I ever had.

The special effects are bright, properly coloured and stand out well. Up to and including the lights on the Enterprise, it all looks like it would on a TV show today. Tractor beams, rotating space probes, and even tentacled aliens look amazing. If the rest of the series has this level of quality (and I expect it will), then we are all seeing the most definitive presentation of this show there has ever been.

Part of this is nostalgia for a show I grew up with, and part of it is wonder at the work that has clearly gone into this. This isn’t some cash grab on the part of CBS. This is a restoration, and presentation of a show that probably as close to what Gene Roddenberry envisioned as we can get. I think these are the releases I am most looking forward to this year, bar none. If you’ve got $18-20 to spare and want to check this out, I assure that you won’t be disappointed and you might curse me for getting you on board to re-buy this series. Personally I only ever owned one Season on DVD (3), and so this will be the definitive purchase for me regardless, but I urge owners of the series to give these a look as they are well worth it.

Cool Factor Sidenote:  The menu screen was an actual fully functional Starfleet computer screen, which is swift, clean and nicely rendered. That was a small, but lovely touch.

Have a gander below at the commercial for the Blu Ray's to get a taste of what I speak.

Posted by GunMetalBlue at 6:39 AM

Email ThisBlogThis!Share to TwitterShare to FacebookShare to Pinterest
Labels: blu ray, CBS, home entertainment, Review, star trek: the next generation, the next level