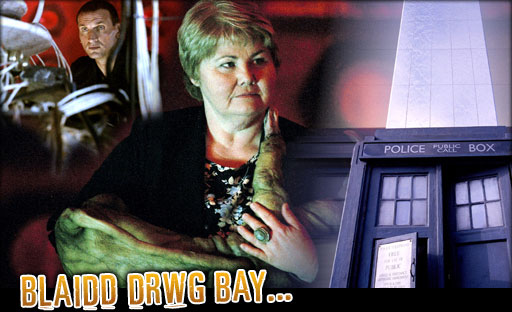 Sorry, it's been a little bit since the last entry. It was the holiday's after all.

The 11th episode of Series 1 of DOCTOR WHO is not very good overall, but it has moments of real greatness as well. It’s not awful by any stretch, but BOOM TOWN is certainly, without a doubt one of my least favourite of Series 1.

Aside from the return of the last surviving Slitheen (let the human-suit-wearing farting resume) this episode doesn’t really offer us a lot beyond the basic of the overall arcing plot.

The Doctor and Company (which now includes Mickey and Jack Harkness) have landed in Cardiff, Wales because there is a Rift in space-time there that will recharge the TARDIS power cells. They spend an afternoon relaxing when they discover that the last Slitheen has become mayor of Cardiff and has hatched a plot to build a nuclear power plant that will cause the Rift to rupture destroying earth which she will escape by fleeing on a “space surf board” (no really). The Doctor, after catching her, plans to take her back to her home planet of Raxacoricofallapatorius for trial (where she was a member of the gangster family Slitheen), and even after she tells him they’ll kill her for her crimes he doesn’t relent.

The rest of the episode trundles along this creaky monster of the week plot to expected conclusions. If you guessed that she would try win enough of the Doctor’s sympathy to wiggle her way out, but to no avail…only to eventually be given a “second chance” (in an odd way) at her messed up life later on…then you guessed correctly.  Which is the proper theme of the episode, but to me it has nothing to do with the Slitheen plot at all. Read on…

The saving grace for the episode is Mickey. Ah Mickey Smith. What was once a foil of a character who existed so Rose would be able to run from something (AKA, her footy-loving, lazy, going-nowhere boyfriend) to her new life in the TARDIS, is now something much deeper. This is where I feel that RTD really shines in his writing. Where other writers might feel like Mickey had played out his usefulness and left him by the wayside leaving him to move on with his life post-Rose…Russell lets us dwell longer on him. Not only that by Mickey speaks the words that the rest of us only get to cry from the couch. Where have you been? We were worried sick! While you were gone I started dating someone else. You weren’t there for me. I got lonely. All the normal stuff that other writers “handwavium” or simply ignore, RTD brings front and centre in all its ugly glory. “Here” he says “This is what life is, this is how proper real humans really would react to this situation! Feelings are hurt, lives inevitably went on.”

So it is that Mickey grows a spine, tells Rose a lot of the things he truly feels. He tells her he loved her, but that with her missing there was only so long he was willing to wait. Rose reacts (as she always does) by attempting to appease Mickey and apologize while still giving off the vibe that where she really wants to be is with the Doctor. What’s truly heart-rending is that Mickey leaves without telling Rose (or anyone else) goodbye. She realizes this, and the Doctor offers to wait for him, but she says no, deciding maybe they both need a “second chance” as well.

Next Time: We get into the penultimate episode of the Series with BAD WOLF.
Posted by GunMetalBlue at 7:31 AM