Book Review: WHEN THE SAINTS by Dave Duncan 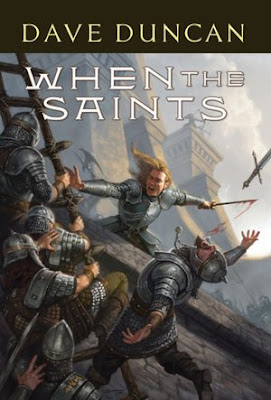 The four remaining brothers Magnus have gathered to help their brother and newly minted count defend his castle from being overrun. Surrounded on all sides, with no hope of help from the outside world, the odds are stacked against them even making it through the night alive.
But the brothers have a secret weapon, the youngest of them, Wulfgang, has the power to speak with dead saints. These saints, or demons depending on whom you’re talking too, can perform miracles and might just be the solution the brothers’ problems.

But there’s a problem, Wulfgang has been marked by the Catholic Church and is about to be hauled in front of the Inquisition for dealing with the devil. He also happens to be madly in love with his brother’s fiancé as well as being used as a pawn by scheming politicians who want to use his abilities for their own personal gain.

Torn by competing loyalties, unsure of his own motivations and unable to find a moment to make sense of it all Wulfgang stumbles along, doing the best he can, to serve love, his family and his country. If only his best was good enough.

WHEN THE SAINTS is the second and final entry in writer Dave Duncan’s BROTHERS MAGNUS series. The book isn’t so much a standalone novel in its own right, but rather the continuation of events from the first entry in the series, SPEAK TO THE DEVIL. In fact, the story picks up less than 24 hours after the conclusion of the first book and deals with nearly all the same sub plots that consumed the characters in the first entry.

I found the character work in this book is where Duncan really shines as an author. In SAINTS he manages to sketch out fully fleshed characters with only a few scant lines. Working from these thumbnails, readers are able to visualize distinct personas without being bogged down by endless description. These are not bland and interchangeable walk ons, but vibrant personalities brought to life through Duncan’s incredible ear for dialogue.

There’s a wonderfully rich underworld being built in this book. In SAINTS magic use is supposed to be a secret, it’s very use concealed and controlled by various religious orders, with only a small group of independent users running around. When magic is applied it’s done so covertly, in a manner as to give everyone involved maximum deniability.

Like all of Duncan’s forays into the world of magic, the ‘how’ and the ‘why’ of its existence is almost as interesting, if not more so, then its actual application. Magic has hard and fast rules here, it’s not simply a liberal dose of hand wavium to be applied whenever the author has written themselves into a corner. Learning the rules, and more importantly, learning how to break the rules is part of what makes SAINTS so compelling a read.

SAINTS paints a picture of a world, much like ours, but where some of the names have been changed in order to take dramatic licence. Sprawled roughly across Renaissance Europe the book attempts to incorporate established historical facts, such as the meteoric rise and fall of Joan of Arc, and blend them with the myth and legends of the doings of Catholic Saints. It seems all those unexplained phenomena weren’t the rumblings of the ignorant after all, but rather ordinary humans, or workadays, catching a glimpse of magic users plying their craft. The friction between history and myth, magic and mundane, creates a series of increasingly unsustainable scenarios that constantly propel our ‘hero’ Wulfgang along and forcing him to play a running chess match in a game he doesn’t totally understand.

Dave Duncan is one of those authors I’m continuously trying to push on people. I’m like some bookstore drug dealer, offering you the first taste for free in order to get you hooked.* It can feel like a Sisyphian task at times because Duncan doesn’t seem to have the profile of other genre writers. But he fits easily in my list of favourite authors because his books are just so damn good.

One of the elements I love about Duncan’s writing style is his clean, straightforward prose. Don’t confuse uncomplicated storytelling with simplistic narratives. Just because he’s not here to mince words doesn’t mean his subject matter and his approach to examining it is in any way neutered.

There’s a connection between writer and reader in any Duncan book. Duncan trusts the reader to bring their own imagination to the table and flesh out some of the story elements. Nothing drives me nuts faster than when an author wastes valuable real estate examining the wall tapestries or explaining the socio-political underpinnings of a mythical space empire. Even worse, when characters ruminate endlessly to themselves, forever dithering over even the most basic decisions because the writer has confused internal monologuing with internal conflict.
We’re here to reader a bloody story, it’s perfectly acceptable to set the stage, but if you start endlessly mucking about with the minutiae of the individual trees you’re going mar the perfection of the entire forest.

WHEN THE SAINTS is vintage Dave Duncan, a smart story told at a blistering pace and populated by compelling characters. It is exactly why you read books in the first place.

*seriously, why aren’t you reading WEST OF JANUARY or the RELUCTANT SWORDSMAN trilogy or the MAN OF HIS WORD series?
Posted by Chris at 7:02 AM