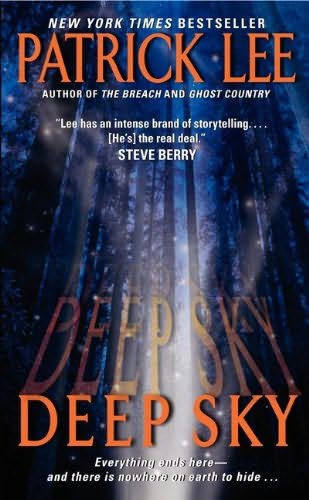 The anomaly called the Breach is the government’s most carefully guarded secret.
But there is another secret even less known . . . and far more terrifying.
As the U.S. President addresses the nation from the Oval Office, a missile screams toward the White House. In a lightning flash, the Chief Executive is dead, his mansion in ruins, and two cryptic words are the only clue to the assassins’ motives: “See Scalar.”

Now Travis Chase of the covert agency Tangent—caretakers of the Breach and all its grim wonders—along with partner and lover Paige Campbell and technology expert Bethany Stewart, have only twenty-four hours to unearth a decades-old mystery once spoken of in terrified whispers by the long since silenced. But their breakneck race cross-country—and back through time and malleable memory—is calling the total destructive might of a shadow government down upon them. For Travis Chase has a dark destiny he cannot be allowed to fulfill . . .

Patrick Lee is a bit of an anomaly in the “thriller” genre of fiction. While his books do fit solidly into said category, they also contain an air of the fantastical, and even science fiction aspects. So where other thrillers always seem to take current, cutting edge technology and weave it into murder mysteries, historical mysteries, or even chase fiction, Lee jumps up a step and takes the FRINGE route. He’s created books that always contain “Breach” artifacts, which seem to be WAY beyond our human technology and do the most wonderfully insane things.

And that is why he stands out from his contemporaries.

It’s also why I think he stands in a fresh category all his own. Though I’m not positive what to call it.

He also writes a killer action thriller that usually never stops for breath.

I went into the 3rd (and last of the trilogy) of Lee’s “breach” novels, DEEP SKY, with very high hopes. Strangely the first 100 pages or so (beyond an initial “wtf” moment in the opening) are much slower than I had been used to in the two previous volumes. The first two novels rocketed off from the first page and were relentless all the way through. I’m convinced (after finishing it) that Lee may have done this slow burn as a purposeful build-up for his 3rd act though. At any rate, while I enjoyed those 100 pages, they didn’t quite blow me away as much as the other books in the trilogy. That said, AFTER the 100-page mark the narrative skips off to hyper speed and we are back to the ridiculous, rocket ship pacing I am used to.

The story also starts to throw more “WTF” moments at you than you could ever hope to count. How long could the pace and revelations and messed up “Holy crap, did I just read that!?” moments keep up? It turns out that they do so for the REST of the book! While I read the first 100 pages in two or three sittings, after that I read the following 300-ish pages in one sitting yesterday afternoon. The book grabbed hold of me, would not let me go.

While Travis and Paige are front and center for most of the book, tech nerd Bethany kind of gets relegated to the back burner as only a helper/tagalong this go. Considering her up front position in GHOST COUNTRY that was to be expected, as this IS Travis and Paige’s story so her smaller presence here wasn’t really disappointing for me. The breach entity that is used here (the Tap, which I won’t explain here, go READ the book!) is a really, really interesting one and is certainly equal to those that came before in odd traits.

The final act. Wow. Just Wow. The 3rd act of the book is so batsh*t insane and also so completely amazing that it melted my brain into a puddle of goo. This is one of those novels that makes you marvel at the forethought the author put in from the beginning, and it twists and turns when you don’t expect it to. I had my jaw on the floor more often than not. I was speaking with another Lee reader about it and the more we tried to figure out the logistics of the events in third act of DEEP SKY, the more awesomely, brain destroyingly mixed up we got. And naturally the more I thought about it, the more impressed I am by what Lee has achieved with the trilogy.

Lee has created an enthralling story with these books and ended it in very strong in a way. A way I don’t think anyone will expect. The pace at the beginning is the only snag in an otherwise brilliantly executed finale to the “breach” novels. Lee is one to watch in the future, as he has a distinct voice, and his mind has crafted a clever, thought-provoking, riveting series that can be puzzled over and enjoyed by anyone.

Can’t wait to see where he takes us with his next books.
Posted by GunMetalBlue at 6:17 AM