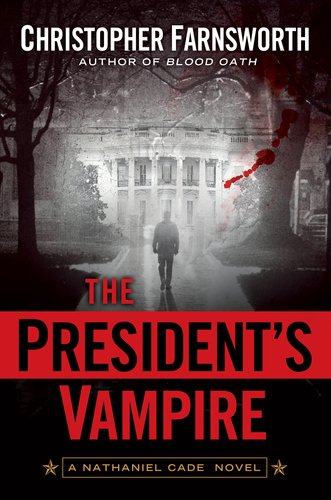 Christopher Farnsworth busted out of the gate with his debut novel BLOOD OATH (which I gushed about). A novel in which, over 100 years ago the president used a sworn oath to wrangle Nathaniel Cade (a vampire, obviously) into America’s service against a myriad of other and worse supernatural beasties that threaten the country. The premise and the book itself work quite well, and I was impressed enough to pick up the 2nd book in hardcover.

THE PRESIDENT’S VAMPIRE picks up the story not long after BLOOD OATH left off, and rockets right off about a new supernatural threat. You recall in the first book when I noted the brief mentions in the Reliquary (Cade’s underground hideout and beaten-beastie treasure trove) of Lovecraftian, Innsmouth minions? Yes, well this book picks up that strand and runs with it…in a direction I wholly wasn’t expecting.

I expected a full out battle in R’lyeh between Cade and Cthulhu and Shoggoth!

No wait. I didn’t…but how cool would that be?

Okay, I kind of admit I did want that. I wouldn't be a nerdy fanboy if I didn't!

Shut it, leave me alone.

No, what happens here has to do with more of a fish-lizardy menace that bears links to those old stories, but exists as its own evolution. Farnsworth takes it in his own direction and creates a really scary villain (s) for the book, so that even though I know how strong he is…I still feared for Cade and I certainly feared for Zach (Cade’s handler…pay attention!). The various directions the story went in that I wasn’t expecting were to do with other plot elements that came to bear as the novel progressed. Various famous American events and historical mysteries were brought in, and I initially wondered if it might all be too much and overwhelm the story. Thankfully it doesn’t and not only does Farnsworth juggle all these plot points well, he weaves them together into a very cohesive and very readable thriller.

The prose is workmanlike, but addictive and reads in spurts. Having the narrative cut down into shorter than average paragraphs and sections is a great trick that I have always enjoyed to speed up pacing and make things pop at you like rice krispies in milk (Yeah, I just used a cereal analogy, what?). Farnsworth proves himself an old hand at this, since the story skitters around like an action movie and is kind of relentless. So here is a meal melding of Urban Fantasy and Action Thriller seasoned liberally with History and Mystery. There’s not much more to add but the kitchen sink, and it just clicks together better than I ever thought it could.

Is the book perfect? No, it has a few issues like being a little bit more of the same thing in the main arc area as the first book and it includes a kidnapping section that I found a little off-kilter, but none of that really takes away from the narrative enough to really bother me. In fact, those are pretty small points, but in the spirit of an honest and balanced review I’d be remiss if I didn’t mention them. If you enjoyed BLOOD OATH, you will enjoy this one as well, it just doesn't go much further into new territory is all.

Oh and I’m not going to lie, Farnsworth wrote a really steamy sex scene in this book. As I was reading it I actually said (out loud, to no one in particular) “Oh my!” It was quite scandalous and would rival any author who tackles that sort of thing on a regular basis. So well done on that front Christopher.

Are you looking for a book that includes the staples of supernatural fantasy, but has the mindset and the paces of a thriller? I think Farnsworth might be for you. He adds little chapter preludes that are always interesting (sometimes concerning the story at hand, sometimes not) little tidbits about the real world interacting with the supernatural one. I really relished those in the first book and did so again here. Though he brings a few mentions in of fictional movies from the 80's as if they actually happened, and that kind of threw me a bit.

THE PRESIDENT’S VAMPIRE is a very well-written sequel to BLOOD OATH and while I don’t see the series quite firing on all its pistons yet, I have much faith that it will do so as it progresses. The best compliment I can give is that these two books made me feel like I did when I read Jim Butcher’s first two Dresden Files novels, I KNEW we might be on the verge of something awesome. Anyone who knows me is aware that the Dresden Files really ramp up as of Book 3 and onwards…and that’s why I am REALLY looking forward to the 3rd of Farnsworth’s Cade books as I think we may be again, on the verge of greatness.
Posted by GunMetalBlue at 8:35 AM