Not Quite A Book Review: Odd & The Frost Giants by Neil Gaiman 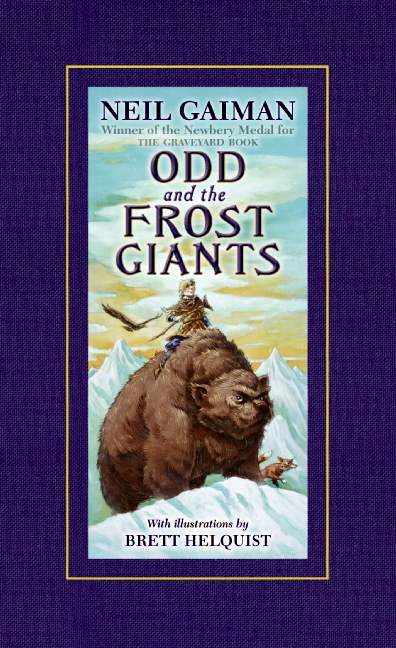 I am a self-avowed, unabashed, fairly die-hard Neil Gaiman fan. I have been such for many years now. I believe the first thing I ever read by him was STARDUST way back in 1999, and I found him through a roundabout way as well. I found out (through my fanboyism) that Tori Amos (whose music I listened to almost exclusively as a teenager) was friends with Neil and that he was a writer…so I looked him up. The rest is history, as after STARDUST I read pretty much everything else he wrote that I could get my hands on. As subsequent releases came out I would snatch them up from the new release shelf with much aplomb and dive right into them.

The only thing I hadn’t read by him was his entire DC Vertigo SANDMAN run (something I am currently rectifying in as many spurts as my pocketbook will allow since I am buying those gorgeous ABSOLUTE editions), and up till this morning I had been holding off on the last book I had by him that was unread. That book was ODD & THE FROST GIANTS.

Sidenote: Attempting to review Neil Gaiman’s work is like attempting to review the sun for being a good star in the heavens and keeping us bright and warm every day. It’s just never failed me as fiction and so I’ve always been a bit daunted by trying to objectively review an author whose work I so clearly adore.

Why have I not read this book yet? You might ask me.

Well it’s easy. I didn’t want to KNOW that I had no more new novels to read by him, so I purposely put off reading this latest YA title by the man as a result. I have actually owned the book since it came out in 2009, and it has sat patiently in my ToRead pile. It begged, it pleaded, it cajoled to be read. It did inky black cartwheels in the pile. It whispered gothic secrets and great big shouts into my ear. I ignored it.

The book was clever though; it set a trap for me. A long con if you will. Most of my ToRead pile is actually at my girlfriend’s condo since I am there a lot these days. That day I had only brought the book I had been currently reading home to my place, and in a flurry of reading, I finished it. I didn't realize.

I looked at my shelf, and there it was. Grinning. Chuckling. It was aware that it was the only unread thing in my apartment.

“I knew it!” the book said, “I KNEW I would get you if I waited.” It howled with manic book-like laughter.

I sighed, and realized that it was right. It had conspired to be the only book left on my shelf at home. I never go without reading material so I gave in.

Thankfully, this little tale satisfies in spades. It’s a Norse mythology story about gods, and small folk, and giants, and wishes, and beauty. It’s short and sweet and utterly wonderful. It is indeed very short and so I don’t want to spoil anything plotwise, but sufficed to say that if you enjoy Mr. Gaiman at all, then this little nugget will please you to no end.

Secondly, I ought to mention the art. Each chapter has pictures that are sketched GORGEOUSLY by Brett Helquist. Even the chapter title cards are done by him with a deft and lovely hand.

The resultant package is a quick morsel of a tale with a point, and a meaning and yet it still takes the form of a full novel with ease. Gaiman is right at home with talking animals, larger than life Frost Giants, and even the most beautiful woman in the world.

I’m now sad that I will have to wait for Gaiman’s next book, but I am really pleased that ODD & THE FROST GIANTS did not disappoint and is a wonderfully magical story.
Posted by GunMetalBlue at 9:00 AM