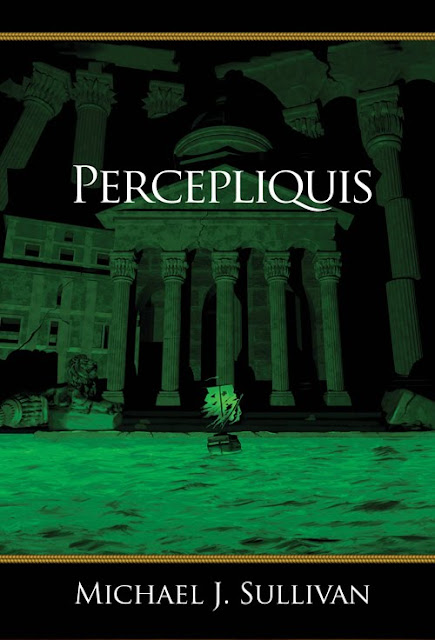 IT ALL COMES DOWN TO THIS...THE ELVES HAVE CROSSED THE NIDWALDEN. TWO THIEVES WILL DECIDE THE FUTURE.

NOTE: This review is totally spoiler-free. So fear not readers if you've not yet read the other volumes in the series, this review won't spoil anything.
I talk, and write a lot. I have always been known as the person in my family who rarely shuts up. So you can imagine what it takes to make me speechless.

This morning when I read the final page of PERCEPLIQUIS (6th and last novel of the Riyria Revelations) by Michael J. Sullivan I was speechless. I’ve actually taken most of the afternoon to let the tale I read to sink in, but I also didn’t want to let too much time pass before I wrote up my review, and so here we are.

As I went into reading this novel I had some trepidation, as is the norm for the final book in a series, about reading it. Would it live up to the books that had come before it? Would it meet my expectations? Would it all be worth it?

I am very happy to report that PERCEPLIQUIS was even better than my expectations. It is an absolute triumph in every sense of the word. All the groundwork that Michael had laid down in the previous volumes, some of which was decidedly subtle, comes to full fruition here. And again, as I have discovered is the norm with Michael’s work, there is not a stone out of place within the narrative. Every sentence has a purpose. He has not lost the lovingly detailed, yet simple, easy prose that so defined the first book, and though the story grew and became part of a much, much larger world, this is still a very character-driven novel. In fact, PERCEPLIQUIS may in fact be the MOST intimate of all six books.

This book really does have it all. If you were wondering on what sorts of levels it delivers...there are twists, turns, revelations, sweeping action, emotions, history, heroics, and certainly devious villainy.

I found myself immediately drawn back into the story and the world of Elan. The very first thing you will notice about this book is how visceral and realistic a lot of the chapters are. They jump off the page at you and grab you by the collar pulling you along. There are sections that are about as harrowing as it gets. A few moments actually had me with sweaty palms as the tension and danger mounted. The pace flies along as fast as the fastest of the series has ever done. What is even more interesting about that is PERCEPLIQUIS is actually enormous! Clocking in at a whopping 550-ish pages, it is certainly the largest of the six books and funnily enough not a page here is wasted. Where some other fantasy novels can suffer from a bit of bloat, once again Sullivan sidesteps that pitfall and shows me that every word belongs on the page, and of course before I knew it I’d been reading for hours and had devoured half the book!

The characters we have grown to love in this series are all evenly spread out in the narrative, and judiciously handled throughout to be honest. It really was like visiting with old friends. I also wanted to note that the assembly of most of these characters together really felt like The Avengers to me. We have had books that have concentrated on each of these people in really individual and direct ways, where we have delved into their personalities and seen a lot of what makes them tick. Well here Michael gets to break out the action figures and display them together. So all these people who all have very distinct and excellent personalities are assembled into a moving organism of awesome. I mean watching Mauvin interact with Hadrian, or Magnus interacting with Degan Gaunt, or even simply Alric and Arista together again was a total treat. Everyone gets to come out and play, but moreover everyone gets to be part of the larger tapestry in some way. That said, it should be noted that there is growth on display here as well, no one stagnates and everyone continues to get deeper and develop more layers as the novel progresses. Myron is one example of growth in the series that’s kind of unparalleled. He begins his story in THE CROWN CONSPIRACY as a very meek, survivor monk who loves learning and books but is fairly unworldly otherwise. By the time we get to PERCEPLIQUIS he has grown, but not in the way you might think. I think you will be pleasantly surprised by his (and others) character growth, even in the final novel of the series.

Emotions. Okay, I am not a suck by any stretch. I’m the type of guy who holds tears back in a gruff manly way, gritting my teeth and forcing myself not to cry while the tears well up and make me glossy-eyed. Well, I am not afraid to admit that Michael pulls no punches in the book and I had *ahem* manly tears at least two times, sobbed uncontrollably once, and even one moment where I found tears springing out on my cheeks and I had no idea they were coming on beforehand. If you recall my comments about Myron and the Tree in THE CROWN CONSPIRACY and how beautiful a moment I thought that was...well Michael has outdone himself and there is a moment in PERCEPLIQUIS that is probably the loveliest thing he’s put on paper so far. It is without a doubt a master storyteller moment, and one that utterly gutted me to my core emotionally. It’s not often, like I said above, to make me speechless but this book did it. I simply closed the book and sat there for a few minutes just letting it all sink in.

This book achieves something most series set out to do, but some never reach. It uses what has come before as the blocks with which to finish the story, but it also finishes it as strongly as possible. PERCEPLIQUIS is an absolutely breathtaking triumph of a book. It will make you cheer, it will make you laugh, it will make you cry, and it will make you happy. Michael J. Sullivan’s work is a gift to the fantasy genre. PERCEPLIQUIS proves that to me in spades, as it is a clever, thought-provoking, wonderfully classical novel. It lifts you up and allows you to deftly drift along above it watching the narrative unfold below you, but it also dips you down into the thick of things for long intervals during which you’ll be hard pressed to find anything more intimate or heartfelt. Sullivan has done it here; he’s created a series that will be looked upon as a classic that will stand proudly on reader’s shelves for ages to come next to contemporaries like J.K. Rowling, Brandon Sanderson, Robert Jordan, and Jim Butcher. It will certainly do so on my shelf.

When I started the series I was super excited about it, but the fact that is has brought me here to this place where I feel like I now have a gaping hole in my chest where the series was, I didn’t expect that. I have only felt this way twice before (once with the final HARRY POTTER and once with the final Steven Erikson MALAZAN novel) and both times I found it hard to accept that the story was done. Thankfully, I will happily re-read this story down the line. It is one that I am positive I will get even more out of on re-reads, and it will be nice to visit again with old friends.

They sometimes say that a series has ended on a high note, and I think that phrase would definitely apply here. But of course with Riyria Michael has ended it on a high note that is sounded from a golden horn on a crisp, winter’s day. Its music carries across forests and villages, passing by curls of woodsmoke, tall intricate elvish towers, huge majestic mountains and coursing crystal waters.

In every sense of the word, fantasy.

So I’ve reached the end of the series and I’m really quite sad now that there is no more to look forward to. I hope that Michael continues to write for years to come as I truly believe he is a master of his craft, and an author that should be treasured.

Note: This book will be published VIA Orbit within the final omnibus THE HEIR OF NOVRON on January 31st, 2012 in the US, CAN and the 26th in the UK
Posted by GunMetalBlue at 7:46 AM