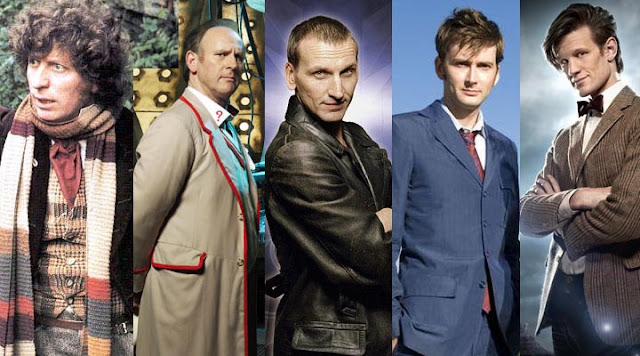 The most consistently visited post in our blog’s yearlong history is my original DOCTOR WHO Crackpot Theories: River Song Is The TARDIS post. Without fail, most months, it tops the list in hits and holds the record for most views ever by a country mile. What’s funny about that is the theory has long ago been blown out of the water by the revelations of who River Song actually is, but the post still gets hit numerous times every month.

Why do I bring this up? Well as you can see by the post title, it’s that time again. Crackpot Theories time!

Up this time, I speculate on the nature and story that will be told in the upcoming 2013 50th Anniversary special(s). Recently Moffat stated the following in an interview about the 50th:

"Why talk in the singular? The plans are at an early stage, but we have some very clear ideas about some of the things we're doing, and I think Doctor Who fans and kids will think it's the best thing ever. We've got a load of very big plans – the mere fact that we're talking about this two years before the event should tell you how seriously we're taking it." ~Steven Moffat

The notion being that perhaps the 50th anniversary will be spread over more than one episode. This prompted me to my theory. Now stick with me for a bit while I wax on the immediate future of DW (AKA Series 7) first.

Matt Smith’s 11th Doctor, we now know is headed into the 7th Series. As quoted by Dorium Maldovar in the final Series 6 episode THE WEDDING OF RIVER SONG:

“On the fields of Trenzalore, at the fall of the 11th, when no living creature can speak falsely or fail to answer, a Question will be asked. A question that must never, ever be answered. Doctor Who?”

So this leads me to the immediate belief, that the “fall of the 11th” could very well be the 11th Doctor’s death and regeneration into the 12th Doctor (implied by the fact that Matt Smith may be leaving the role after Series 7). So to me that means that perhaps, just perhaps the 50th Anniversary special(s) will be when we actually see the prophetic events at the fields of Trenzalore.

So here we come to my crackpot theory. If there might be multiple episodes for the 50th, and so far people have speculated that previous Doctor’s (David Tennant chief among them, and hopefully Peter Davison or even Tom Baker) will be returning in some way (like the previous many Doctor’s eps like THE FIVE DOCTORS), why not dedicate an episode to each Doctor. That way you have 4 or 5 disparate stories, each with a different Doctor in the lead that all head in the direction of the 11th Doctor’s fall at Trenzalore. Then cap it all off with one final episode where all the stories come together and all the Doctor’s star in it at once helping one another to whatever narrative common goal or resolution.

It’s seems to be only a bit of a stretch, since the commonly held notion that multiple Doctor’s would feature in the 50th. So jumping to the conclusion that there might be multiple-Doctor arcs to the overall story doesn’t seem so much like fanboy crackery as it does common sense to honor the franchise. Created by Steven Moffat, the ultimate DW fanboy himself.

I’d like to see this happen. Sadly, I doubt we will know ANYTHING about it until later next year when they start shooting the special(s).

What do you all think? Fanboy madness or believable prophecy?

Posted by GunMetalBlue at 7:23 AM