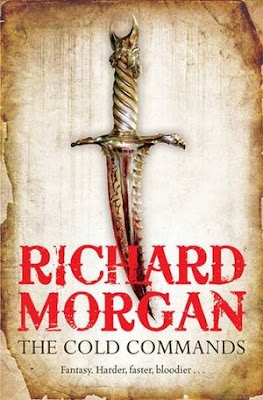 It’s been a year since the dwenda invasion was first turned back.

Famed war hero Ringil Eskiath continues to wage his personal war against the slave trade that killed his cousin. In the capitol his former comrade in arms, Egar Dragonbane, has grown bored with city living and chafes at the easy life that is dulling his senses. Finally, the half Kiriath noble, Archeth Indamaninarmal, has been sent on mission halfway around the world to retrieve a mysterious Helmsman that claims to have knowledge about how the Empire can defeat the dwenda hordes.

Because make no mistake, the dwenda have not gone away. Barely defeated in armed combat they have decided on a more subtle plan to take back Earth, corrupting the Empire from within. And, as the dwenda’s plans move rapidly towards their final endgame it looks as if the conquest of humanity is nigh.

Keen observers of this blog might have noticed that while Scott and I are quite willing to ramble on at length on just about any book that we get our hands on, we generally tend to stick close to our respective genres of choice. I mostly prefer sci-fi while Scott has staked his claim to the world of fantasy.

My aversion comes from having read too much regurgitated fantasy. I long ago grew tired of the same shop worn character archetypes that were thrown into the same old storylines. Yes. I know there are a lot of great fantasy books out there and I’ve been fortunate enough to read many of them. But on the whole I found that I had to wade through piles of mediocre rehash in order to get there.

And, as a reader, I just don’t enjoy magic all that much. I always want to know how and why things work and oftentimes magic is presented as this unknowable device that you just have to accept on faith. Mind you, when you get down to it’s not like science fiction is any different. A lot of the advanced ideas and constructs are so fanciful and impossible to explain that they might just as well be magic. But at least with sci-fi there is often a pseudo-scientific explanation that I can wrap around myself in order to pretend it all makes sense.

(It’s a bit like someone who enjoys Cheez Whiz turning their nose up at aerosolized cheese spread because they feel like the addition of the gas really screws up the refined taste.)

What makes THE COLD COMMANDS so great as a fantasy novel is the complete absence of the usual clichés. This book is as close as you can get to a hard boiled fantasy novel without transplanting everyone in it to 1940s Los Angeles.

What struck me most is that that book was utterly devoid of any romantic overtones. The lead characters are enveloped in a hard bitten mentality that is fresh and compelling. Moreover the book’s ‘heroes’ are tragically flawed. Ringil, Egar and Archeth aren’t noble and just, they’re functioning drug addicts, bored war heroes and shit disturbing semi-sociopaths who think more about getting laid then about doing good. In fact, when they do manage to accomplish something positive it’s more likely to be an accidental side effect from some self-serving personal undertaking.

And it’s not just for show. These aren’t some crunchy on the surface, creamy in the middle, faux anti-heroes that Hollywood has engrained upon us must be portrayed by perfectly sculpted bodies, lantern jaws and a wry sense of humor. There are no charming Han Solos here, just damaged goods trying to make the best of a world that’s falling to pieces around them.

It’s not just Morgan’s strong character work that makes COMMANDS such a compelling read, the man is a gifted wordsmith as well. Drawing heavily on the expressive gutter pulp stylings of the hard boiled genre, he often manages to transcend these coarse underpinnings to create vibrant snapshots that stay with the reader after the story has moved on.

THE COLD COMMANDS is a great book that should be at the top of any genre reader’s ‘to consume instantly’ list. Morgan is at the top of his game here, creating a taut and riveting tale that manages to hook you in the book’s first pages and refuses to let go until its explosive ending. COMMANDS also achieved that rarest of victories, instilling in me a sense of rage and frustration at having to wait a couple years in order to see how this story pans out. That honour was previously a hallmark of the multi-year gaps between installments in the WHEEL OF TIME series.

And, for expanded universe aficionados, Morgan even manages to tie his incredibly popular Takeshi Kovacs trilogy into the book’s mythology, adding a deep layer of subtext and meaning to the story’s narrative that will have those ‘in the know’ pouring through the pages looking for hidden clues*. Of course, with the implied involvement of Kovacs it means the sci-fi\fantasy elements of the novel are blurred even further (maybe that’s why I enjoyed it so much). If you’re looking for something different out of your fantasy books, this trilogy is the perfect place to start. Read. Consume. Enjoy.