Is Amanda Palmer a fame whore? 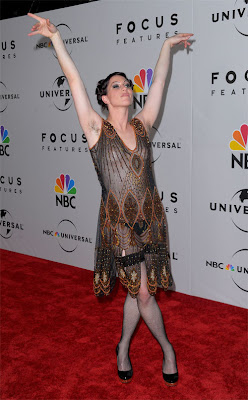 I engaged in a protracted conversation last week with someone who suggested that Amanda Palmer, one of my favourite recording artists, is an attention whore.

In 2008 Palmer left the Dolls to strike out on her own and has been marching to the beat of her particular drum ever since.

In a nutshell the fame whore argument seems to be based around the fact that Palmer’s unshaven armpits, elaborately hand drawn eyebrows and marriage to literary superstar Neil Gaiman are all carefully calculated tactics to help her career.

These links were sent my way to help bolster the agreement.

I was away from a computer as the conversation developed so I was reduced to short (and poorly spelt) rebuttals texted from my phone. But in the back of my head I realized that the issue deserved more than just a stock response on my part.

So let’s get right down to it.

Long Answer: Weren’t you paying attention? I said no.

Look, a fame whore is a person to which fame itself is the only goal. They don’t care why they get your attention, just that they have it.

Case in point, witness the career flameout of Britney Spears, who, when her singing career was in steep decline, started stepping out of limousines without any underwear on. Oh, and when that stopped being news she decided to shave her head in a desperate gamble to keep herself on the front page of the tabloids. You could go back and forth about whether or not these were deliberate acts, and I believe that they were, or simply faulty judgment on the part of someone desperate to maintain public interest in a flagging career.

In the end it doesn’t really matter. The end result is that Britney pursued a course of action destined to get her a couple minutes of air time on ENTERTAINMENT TONIGHT or TMZ and it didn’t have a single thing to do with her artistic ability.

I’d also suggest that the glut of D-List celebrities clogging up the airwaves in a dying spate of reality shows is pretty much the same thing. For the most part, these people aren’t noteworthy for the things they’re doing right now, instead they’re simply cashing in on the 15 minutes of fame their younger selves worked so hard to achieve. Their desire to be in the public eye, under less than flattering circumstances, outweighs the damage they’re doing to their careers and reputations.

So what makes Amanda Palmer any different?

Simply put, I don’t believe that fame in and of itself is her end goal.

Its easy to shape the facts to suit your attention seeking theory when you’ve got an outgoing and artistic personality like Palmer’s. She’s assertive, she’s creative, she’s unconventional, she’s always trying new things, she’s a relentless self promoter and she’s a social media heavyweight. Which, when you add all those things together, that’s just called being a good artist and businesswoman.

I think the difficulty arises when audiences try to reconcile their vision of what an attractive singer\songwriter looks like with the no holds barred artist on the rampage image that Palmer inhabits.

I could point you to her blog posts where she talks about the difficulty she had with her old record label where she resisted their overtures to record a more commercial style of music because it wasn’t the right fit for her.

Audiences expect their pop stars to be overproduced, their image buffed to a shiny plastic gleam and their personal controversies to be sordid and unseemly. Palmer is none of those things.

To my eye she’s the exhibitionist theatre student type always pushing the limits on what the mainstream will accept, not because she’s seeking attention but rather because that’s what good art is all about, experimentation, messing around, getting your hands dirty. (How many artists do you know who put aside their instrument of choice to take up the ukulele and craft an understated, but no less haunting, album of Radiohead covers.)

Palmer might not always be successful (Evelyn Evelyn I’m looking at you) but she’s never complacent. She’s always moving on to the next project or the next idea so quickly that it seems like she never lets herself get caught up in failures.

Failure being a highly subjective term that is wildly open to interpretation.

Basically, some people are confusing aggressive self promotion, the lifeblood of any independent artist, with being a fame whore. They expect Palmer to sit quietly in a basement and hope that her album, theatre project, or art installation will sell and market itself.

Exhibitionist tendencies and a refusal to fit in should never be labelled fame whorery. Because we’re telling artists that a resistance to conforming is an invitation to ridicule. And I thought we were past all that.
Posted by Chris at 12:52 PM