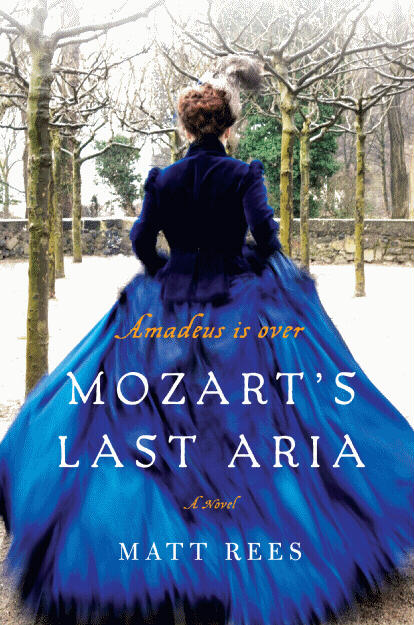 It is 1791 and Wolfgang Amadeus Mozart is enlightenment Vienna's brightest star. Master of the city's music halls and devoted member of the Austrian Freemason's guild, he stands at the heart of an electric mix of art and music, philosophy and science, politics and intrigue. Six weeks ago, the great composer told his wife he had been poisoned. Yesterday, he died. The city is buzzing with rumours of infidelity, bankruptcy and murder. But Wolfgang's sister Nannerl, returned from the provinces to investigate, will not believe base gossip. Who but a madman would poison such a genius? Yet as she looks closely at what her brother left behind - a handwritten score, a scrap of paper from his journal - Nannerl finds traces of something sinister: the threads of a masonic conspiracy that reach from the gilded ballrooms of Viennese society to the faceless offices of the Prussian secret service. Only when watching Wolfgang's bewitching opera, The Magic Flute, does Nannerl truly understand her beloved brother once again. For, encoded in his final arias, is a subtly crafted blueprint for a radical new tomorrow. Mozart hoped to change his future. Instead he sealed his fate.

I saw Milos Forman’s Academy Award Winning film AMADEUS in the theatre when it came out, with my parents, at the tender age of 7 (that’s 1984 folks). It developed in me a deep, abiding love of classical music, especially that of Wolfgang Amadeus Mozart himself. I credit the film-going excursion with my folks, a thing I fought hard against as I recall saying, “I don’t want to see some boring history movie!” as my introduction to culture, drama, music and even history. Such a juvenile statement is especially amusing in retrospect because of just how much I now love EVERYTHING to do with History and Music.

So going into Matt Rees latest novel, MOZART’S LAST ARIA, I already had preconceived notions about certain aspects of the Amadeus mythos, making Rees job a tough one. Thankfully he delivers a fairly well thought out, decently plotted historical whodunit that I mostly enjoyed reading. It is not without its flaws, but on the whole this is an interesting story about just what MIGHT have happened to one of the most famous musical geniuses in history.

The narrative begins in the prologue with Mozart’s sister Nannerl as an old woman dying in her bed sharing with her nephew (Franz Xaver Wolfgang Mozart) a diary of information about his long-dead father which goes against everything he’s learned about Wolfgang elder’s life and especially his death. We then switch POV’s and travel to years earlier where a younger Nannerl has just learned of her brother’s untimely death, and his late-life suspicions that he had somehow been poisoned. She travels to Vienna in search of the truth, which leads her into deep intrigues, deceits and dangerous pathways.

Vienna and this entire classical era is handled with absolute precision by Rees. He gets how it should be portrayed and what it might have looked like to someone who knows nothing about it.  Vienna was the CENTER of musical ambitions in the mid to late 18th century, and it is on display here with all the gorgeous gold foiled bannisters, wrought iron sensibilities and lovingly rendered compositions.

It’s strange to come at Mozart’s death from this angle. And to be honest the book concentrates a lot on his Masonic brethren, not to mention the various and sundry people he was associated with during his life in Vienna, be they sketchy or not. Nannerl’s investigative techniques begin to reveal more and more about the man’s death and even more about a brother who she had become estranged from in his waning years. The plot moves along at a fair clip and I was able to read this in only two sittings, which speaks well of Rees’ pacing skills. The secondary characters were interesting and in a lot of ways much more interesting than Nannerl herself. Nannerl actually feels disconnected from the whole affair, as if she is as cold as her investigation. That jumped out at me most, as I felt she should have been warmer to us as audience and she simply isn’t (or wasn't to me at any rate). The whole thing comes across as quite calculating and scientific, so I could never really feel utterly comfortable with her. It also takes away from the story when we concentrate on any type of side plot with Nannerl herself and any kind of love story aspects, since those instances just kind of fall flat. again, that is only my opinion as I'm sure she'll resonate differently with other readers. It is not a reason to dismiss the novel, because even the way Nannerly was, she is a good protagonist, simply not a warm one.

Not quite narrative trickery, and perhaps moreso a device, Rees has supposedly constructed each chapter after a piece of Mozart’s music. I do believe the whole thing is meant to read like a concerto (I could be wrong), and maybe it’s my own naiveté in not knowing enough about classical music structure, but I don’t quite understand that aspect. It took nothing away from me to not know that though, so no worries on that front. I only bring it up because I am sure a more studied classical music student who understands such things would get extra enjoyment from the novel, so good on Rees for constructing it in such a way.

In the end I had already guessed the main resolution, but there is a further twist that I wasn’t expecting, which is always a good thing. That twist is definitely decent, if a little unbelievable. That said, the whole book is quite enjoyable on a historical level as well as historical murder mystery. It is quite readable. As I said above it will take you no more than a few sittings to devour.

Rees has crafted a nice epilogue to the existing Mozart story, and gives it enough umph to make you believe the resolution here MAY have been what truly happened. We'll never know for sure. Aside from my feelings about the stilted, cold nature of the lead, it has other compelling character arcs, fun and dangerous courtly intrigues and even a few broader Masonic mysteries to be plumbed, all in the most civilized and musical city of the Era. Told from the point-of-view of the sister who was never allowed to pursue her own gifts and was constantly overshadowed by her younger more talented brother, MOZART’S LAST ARIA is a study of what happens when a bright burning torch flame extinguishes too early and the candle that lit it goes in search of answers as to why.
Posted by GunMetalBlue at 6:17 AM