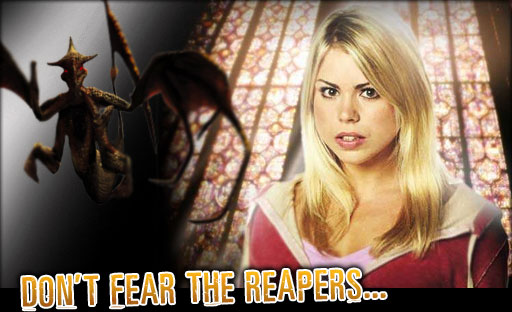 FATHER’S DAY, the 8th episode of Series 1 DOCTOR WHO is one of my all-time faves. Written by Paul Cornell (a veteran of a number of the DW novels), the episode is very self-contained and concerns an aspect briefly covered in the last episode, that of changing something in time, and what the effects of that are. The difference being that Adam had TRIED to change something in time and the Doctor stopped him, but this time it’s Rose who does it (albeit for completely understandable, if selfish, reasons) but she succeeds as well.

It all starts when Rose asks the Doctor for a favour. She wants to go back and see her father (Pete Tyler, who died when she was a baby), and so he takes her to see him when he married her mother Jackie. After that she begins to reminisce about how her mother used to talk about him when she was little and that he was killed by a hit and run driver on the way to the wedding of a couple friends on November 7th, 1987. Jackie told her that no one was there with him, as he died. The more she thinks about it the more Rose wants to go to the day he died, and be there for him as he dies. The Doctor reluctantly agrees and the two travel to the time and place of the hit and run. The problem arises as she stands there and watches him get hit she is frozen and can’t make herself go to him. She asks the Doctor for another chance, so they watch themselves watching Pete get hit and Rose can’t help herself and runs to push him out of the way of the oncoming car and saves his life. Then all hell breaks loose. These huge gargoyle creatures start attacking and devouring people.

The Doctor is upset as he, Rose and Pete head back to  Pete’s  flat so he can change into the clothes for the wedding. When Pete is in the other room the Doctor has it out with Rose about changing something so significant, and the fact that he believes she only wanted to travel with him to come back and save her father, which she denies. The argument ends with the Doctor leaving her there and telling her goodbye, storming out. Pete and Rose head out to the church where Jackie has just arrived and her two parents get into a huge argument about how Jackie thinks Pete plays around on her and that he’s a useless inventor who will never succeed. This stuns Rose as she has always believed her parents were very much in love when he died as her mother says a bad word about him in the future. It’s a poignant moment in the story and one that delves deep into not only Rose as a character, but her family as well.

The Doctor meanwhile has discovered his TARDIS has no interior any longer and that time is wounded. The gigantic gargoyle creatures are bacteria attempting to seal the wound by eating everyone in it (this being a problem the Doctor explains that the Time Lords would have sorted out in the past, but without any around the gargoyles (Reapers) have to do it). Inside the Church where the wedding is supposed to take place it is safe since the event that created the death of Pete in that timeline took place near it.

This episode is the first time that showed me how brilliantly, and uncompromisingly emotional DOCTOR WHO could function as a TV show. Here we have a wound in time that Rose has created because she wants to save her father from his fate, and the Doctor’s subsequent efforts (though he is pissed with her for her choice) to make sure that he saving of Pete is able to stick and she will have her father back. Sadly, the paradoxical nature of the event has made it clear that healing such a wound is not easy. During all this Pete discovers that Rose is actually his grown daughter, and oh my god that scene makes me cry manly, manly tears. I can’t even fathom the depth in that scene, and as just he realizes and Rose’s tears are falling she calls him “daddy” and my heart just melts. How can you not feel that way? Here is a chance given that no one has, to have your father back from a death that meant you never knew him. The tumult of emotions would be staggering.

In what I deem as another step up the ladder/stairs of recovery from the Time War PTSD, the Doctor instead of feeding his anger about what Rose has done, he sympathizes and even goes so far as to try to make sure her act saves her father.  Sadly, in a moment that you can see coming, but is no less hard to watch, Pete realizes (through Rose telling him lies about things he does in the future that are out of personality for him) that he dies in his timeline and that his living is responsible. Imagine the sacrifice you’d have to make. Time is seriously messed up and people are dying, how easy or difficult would it be to make the decision to set the timeline right by dying when you need to? Pete shows himself to be a hero, and the story Jackie is telling Rose as a little girl from earlier (yet still in the future) changes and she says that no one knew why he ran outside the church, but that when he died they said an unknown girl stayed with him the whole time he laid there dying. I mean come on! I’m not made of stone. I’m not afraid to admit this episode makes me very emotional. It also impresses the hell out of me that RTD and Cornell didn’t shy away from the “some things in time MUST stay as they are” and that changing things is a tricky business.  This episode shows us that sometimes even the thing you want most you simply can’t have, and that some things are actually better for having been left as they were. Rose gets a few hours with her father and he gets to show her that although he is not exactly who she imagined him to be, he is still her hero and she gets to show him the strong person she grows up to be. It’s a wonderfully bittersweet episode, and one that I love to watch.


NEXT TIME: Oh the first of the Moffat-Excellence written eps with THE EMPTY CHILD and THE DOCTOR DANCES two-parter!
Posted by GunMetalBlue at 6:30 AM