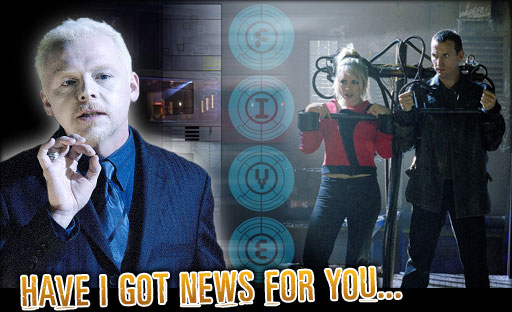 The 7th episode of Series 1 DOCTOR WHO is a bit of an odd duck. It’s written by Russell T Davies, and even stars Simon Pegg in a villainous role, but it’s a really tough episode to properly like. What’s worse about that statement is that this episode is actually the first real key/notice that something is not right with humanity, and this is the first inkling of things that will come to fruition later near the finale two-parter, so you really have to watch it.

That said, if I COULD have skipped THE LONG GAME (I can’t, as I want to be thorough, and I want my co-watchers who haven’t seen these to have the full experience), I definitely would have.

Is it a bad story? No, not at all, and the writing in it is even good. The problem arises two-fold. Issue #1: is that this episode pretty much exists as cautionary tale concerning Adam (picked up in the TARDIS from last episode DALEK). Remember that moment in BACK TO THE FUTURE II when Marty has the sports almanac to place some bets in the past and get rich, but Doc catches him and tells him he didn’t invent the DeLorean to win at gambling…and then the rest of the movie shows why Biff using it is such a bad plan? That’s what THE LONG GAME is for Adam and the Doctor. Only the Doctor is about a hundred times more pissed about it. Issue #2: Is that aside from Adam’s (rather quick) fall from the Doctor’s grace, the episode doesn’t have oodles to say arc-wise, and even the clever first signs of the stuff that will be dealt with in the finale don’t really fit the bill of importance yet. So the episode feels like mostly filler. Which is sad, since as I said above, the writing and dialogue is very good.

Basically The Doctor, Rose and Adam land on a space station in 200,000 years in the future, overlooking the 4th Great And Bountiful Human Empire. The station, they quickly discover has many levels, and is a conduit for all news to be distributed across the empire (96 billion people). In a macabre display that shows the Doctor something is really wrong with this human timeline, the people who report this news have holes built into their forehead that open to receive thick data streams of compressed info, not to mention the station is REALLY hot. Of course it doesn’t take long for the audience to find out that some big nasty baddie (in this case the Jaggrafur creature; a huge upside down fleshy volcano with razor teeth and no eyes that needs to keep cool) is running the show (with his underling Simon Pegg’s The Editor) from the 500th floor, which is a place the inhabitants of the Station believe is some golden-walled Shangri-la, and if they are good they will get “promoted” up there. Little do they know this means their death, so the chips in their heads will blindly keep doing the bidding of the creature.

The episode follows the logical progresson: Something is wrong, The Doctor and Rose investigate, They find a human who is both annoyed by their meddling, and perplexed that her life may not be what she thought, meddle, Get Caught by the Villains, are saved by helpful human, kill the baddie, everything goes back to normal. The only addition to that narrative is the above mentioned “sports almanac” Adam storyline which ends with the Doctor dropping him at home (with the data hole in his head that activates by snapping fingers), destroying his answering machine where he left a message of all the data from the future, and tells him he is not welcome in the TARDIS any longer. He implores Rose to let him come along, but she turns her back on him too. So yeah, they could have called this episode ADAM IS A MORON WHO FORFEITS HIS CHANCE AT TIME & SPACE TO GET RICH QUICK because that is essentially what it does for you. The only other thing it really does is set the Doctor’s mood for the beginning of the next episode (one of my faves), which you will see when we get there.

Simon Pegg is good. He's not great because he doesn't really get to do his comedy thing and is more the villains sidekick who gets to say nasty things, but generally isn't a comedian.

It’s a decent episode as far as a filler one goes, but beyond that you could skip it without missing too much…BUT if you want to be in the KNOW come finale time this episode actually serves as prologue and shouldn’t really be missed. It’s a conundrum, but thankfully the episode isn’t painfully bad or anything, simply kind of boring and by-the-numbers.


NEXT TIME: One of my all-time faves from this series FATHER’S DAY is up next.
Posted by GunMetalBlue at 5:49 AM