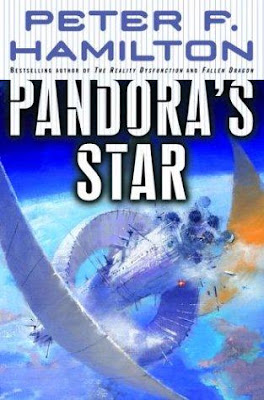 Dudley Bose, a lone astronomer marooned on the fringes of the galaxy, witnesses the envelopment of a pair of stars, in a matter of minutes, by a set of Dyson spheres. His discovery sets off a chain reaction and soon humanity is obsessed with the idea of visiting the Dyson stars to learn how they came to be.

The Commonwealth feels they must investigate this strange phenomenon to see if there is any danger to Earth. However, because almost all interplanetary transportation in the Commonwealth is done via wormhole, the government needs to build an interstellar space ship to explore the Dyson spheres, something that hasn’t been done in hundreds of years. The Commonwealth commissions the Second Chance and puts Wilson Kime, the universe’s last living astronaut in command.

When the Second Chance arrives at the first Dyson sphere they find an impenetrable shell that can’t be scanned, monitored or measured in any way. Shortly after their arrival the Dyson sphere vanishes and Chance is able to covertly monitor the alien species that was trapped inside. While conducting an away mission the Chance is discovered, viscously attacked and forced to flee, leaving two crew members behind, including Dudley Bose.

They Dyson sphere aliens call themselves Primes. Made up of a series of emotionless, highly calculating group minds the Primes are in endless competition with each other for territory and resources. Perceiving the threat from the Commonwealth the Primes extract the secret of wormhole technology from the abandoned Chance crewmen and set about building a wormhole generator from which to attack humanity.

When he starts thinking outside the box, very few authors working in sci-fi today could match author Peter F. Hamilton for his inventiveness and creativity. In PANDORA’S STAR Hamilton juggles a number of high brow concepts and meshes them seamlessly together to create a complex social fabric that is unlike any I’ve seen before. Rejuvenation, wormhole technology and artificial intelligence by themselves are all rich subject matter for sci-fi authors, but to take aspects from each and world build on the scale that Hamilton has is something else entirely.

Hamilton has also done a superb job in his characterization of the unfeeling Primes. Putting aside the standard tropes of creating pseudo human beings in alien form, he has created a new social order which is uncomfortable and unpleasant to imagine simply because its sheer alien and otherworldly outlook is so foreign to human thinking.

Its clear Hamilton put a lot of time and effort into imagining this brave new world and the payoff is a fresh and engaging take on a shop worn story line.

Hamilton puts so much work detailing his complex social structures that he goes on frequent and unnecessary tangents which rob the story of its much needed early momentum.

As a result the story can feel like its structure is bloated at inoppurtune moments. For example the book takes something close to 200 pages before Hamilton finishes introducing all the lead characters. For a 1000+ page novel that’s almost 20 per cent of its real estate. You can't squander a reader's initial goodwill like that by dragging them through countless character introductions.

Unfortunate readers are left trying to puzzle out how these seemingly unconnected characters and plotlines fit together. Continuing disconnect seems to be a part of the problem with STAR. Hamilton needs to do a better job linking the various sub plots together. Whether it’s the mystery of the Dyson spheres' existence, the allure of the shaman-like Silfen, or what the true nature of the Starflyer is, Hamilton introduces a number of interesting plot threads but then refuses to even hint at how they’re connected only implying, between the lines, that said connection in fact does actually exist.

Hamilton doesn’t even attempt to give the reader enough information to let them draw their own conclusions. Instead he plays his cards insanely close to the chest, only revealing what he’s holding when circumstances force him too.

Think of STAR like a futuristic murder mystery. In this instance the crime that needs solving is ‘who put the Dyson sphere around the alien star and why?’ In a standard mystery story important details are released throughout the course of the book, giving readers just enough information for them to think they have a chance at solving the crime before the charmingly eccentric detective pieces it together at the last minute. In STAR the lead characters simply move from set piece to set piece, trying to solve the mystery without the benefit of any clues whatsoever, while our eccentric dick is presenting the reader with a bound copy of a backgrounder somewhere off camera.

Hamilton has done such a thorough job imaginings all the ins and out of his universe that its only natural he’d want to show it off a bit to the reader. Unfortunately what could be done in a couple pages is often done in whole chapters.

When STAR finally does start chugging along it’s an interesting and thought provoking book, despite its frequent detours.

Basically, STAR is a good sci-fi novel that gets held back because it’s overly long, takes unnecessary story digressions and doesn’t attempt to tie its disparate parts back together to serve the needs of the narrative.

I think it would be vastly improved by the touch of a clear eyed editor who was willing to leave some of the background information on the editing room floor and keep the writer on point telling the story, not setting up the story.