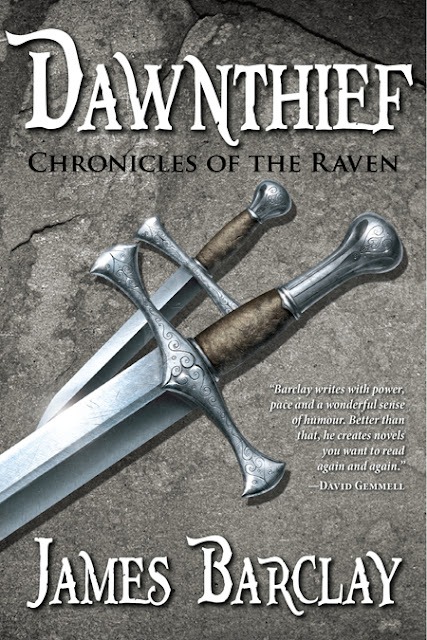 Second Time is the charm.

I started to read James Barclay’s first Chronicle of the Raven series book DAWNTHIEF a number of years ago, and for whatever reason could not get into it. I put it aside and over the intervening years and a house move or two, I lost the book.

Every subsequent time I had passed the book in the store after that I kept reminding myself to give Barclay’s novel another go at some point. Well, I finally picked up another copy of it and started to read. This time, I really got into the story.

These birds are rough!

The raven is a mercenary fighting force consisting of seven men, who live by an honor-bound code of “no killing unless in battle”, but sometimes find themselves working for the less reputable people and groups of society. Thus do the members of the Raven find themselves fighting for a dark mage college in an effort to find the elements of a spell called…you guessed it, Dawnthief. Said spell is said to have the power to destroy everything, but with ancient, and powerful enemies massing across the mountains in the west it is probably the only thing with the power to stop them.

The very first (and surprising) aspect I noticed about Barclay’s work is that no one is truly safe. The peril that The Raven find themselves in therefore feels that much more dire as it happens simply because events happen that you will not expect. The world is quite well created and there is a clear sense of menace about certain people who populate it, those seen and heard from at the start (from the various mage colleges), and those only whispered about for most of the book (The Wesmen and the Wytch Lords). The world building is quite decent and happens over the course of the book (as opposed to massive info dumps that can be prevalent in some fantasy series) in a very organic way.

Go to your room, at the amusement park.

The second thing I noticed is that Barclay’s imagination has seen fit to design a huge world in which to set his characters on their path, but he also crafts tightly knit little scenes that feel very self-contained. That’s probably not all that clear. I mean that while you sit there and know that there is this entire world boiling in the pot out there, when you are with the Raven in the house of a long-dead mage and seeing a gateway through to…somewhere else, that is all there is to you. There is a quality of concentration to that which makes each big sequence happen in an of itself while also existing in Balaia. That is a difficult balance to strike, and one that could cause for a bad reading experience if it leans too much to one side or the other.  Thankfully, Barclay finds that balance and pretty much nails it every time, succeeding in immersing the reader in the scene and not allowing them to forget the outside influences.

There is a hilt sticking out of your forehead sir.
Third aspect. In a number of fantasy series you have what we, the fans, have lovingly referred to as “Holy shit, did I just read that?!” moments.  Barclay wings these at you like thin-bladed throwing knives, which settle into your skull before you even realize. Thus causing you to jump back a line or two, breathe, and whisper an expletive. Those scenes are sometimes action-oriented, sometimes character/emotion-oriented, and sometimes villain-craziness-oriented, but they are always memorable. What a refreshing surprise, in fact. Here is, for all intents and purposes a fantasy series with some of the standard tropes built-in, but it slyly subverts those without you really realizing it till later. It wasn’t until I finished the book that I realized how much better the story I read was than the “insert standard fantasy book here” type novel I thought I was going to read. I’ll be the first to admit that I went into the book expecting something generic, but ended up with something altogether more complex and enjoyable.

The Spells. The Spells in this book are awesome. They are like the spells you’d cast in an RPG game as they have names and do specific things depending on the mage’s skill level. That’s actually a breath of fresh air in a genre where A LOT of magic is totally non-descript fireballs and iceballs. Here, everything has a name, a purpose and a cost (to the user) and I dug that.

DAWNTHIEF is a great introductory book to the Chronicles Of The Raven series and James Barclay is a fantastic author who has a definite sense of pacing, character, and ‘splodey, ‘splodey action. The pace especially nearly never slows down and during the breakneck ride while shit is blowing up to either side of you and you are attempting to get your short-knives out of their underarms sheaths, a mage will knock your ass on the ground with a spell and send you into another dimension.

What a blast of an adventure. Count me in for the rest of the series now!
Posted by GunMetalBlue at 6:38 AM