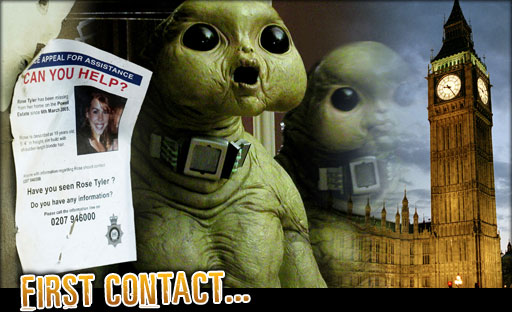 How’s this for playing catch-up with the DOCTOR WHO Re-Watch? The first Two-Parter, reviewed in one post!

Davies wrote both parts of ALIENS OF LONDON and WORLD WAR THREE, and what immediately jumps out at you when you watch, is that the actual alien portion of the story has the backseat for both hour's. It’s the human, interpersonal relationships that are present foremost here.

The Doctor and Rose return to 21st Century earth, with the Doctor telling Rose it’s been only 12 hours since they left at the end of the first episode. Sadly, it has been rather a while longer as a whole year has passed, Rose’s mother Jackie is beside herself, her boyfriend Mickey has been accused of killing her and she was generally very missed. Just as the whole situation of her mysterious return is about to come to a head, a spaceship crashes through Big Ben and into the Thames and the Doctor and Rose are off to investigate. The Prime Minister and most of his cabinet end up killed and Harriet Jones (MP for Flydale North) is on the hunt to discover why and what exactly the spaceship crash has to do with it. Close investigation reveals that an alien race family known as The Slitheen are impersonating the government for their own nefarious purposes.

Like I said above, the alien stuff is fairly by the numbers. The aliens are wearing ill-fitting human suits (in which they have a gas exchange to make them smaller to fit human proportions, but it makes them fart...which I'm sorry, is pretty funny), are attempting to take over the world and the Doctor has to figure out why. Sounds pretty standard for DW doesn’t it? That’s quite alright because the REAL story here is the one about Rose returning, the one about how distraught Jackie Tyler was over what might have happened to her, the one about Mickey Smith being accused not only by the police, but by his own neighbors and Jackie herself of murdering Rose, the one about how furious Jackie is with the Doctor for daring to put her daughter in danger, and the one about the Doctor himself coming to terms with his own attitude about Rose and what she could mean to him and others. 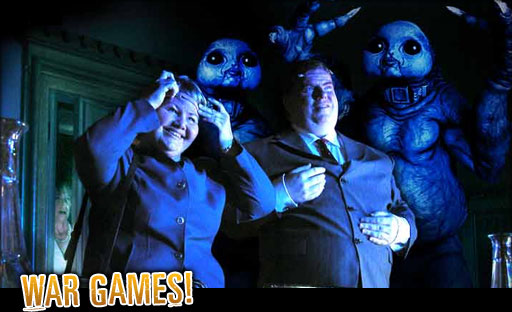 Davies makes a hell of a statement in the second episode, and one that is really uncomfortable to view. Jackie finally comes to terms with the Doctor as benevolent after having seen him saving the world, and plans on having him in for dinner. Rose pleads with him to attend as her mum just wants to get to know him. In true post-Time War Doctor fashion, he flat out refuses, telling her he doesn’t do dinner, or families, or the like. He also gives her a choice between that or coming with him right then to see a phenomenon in the Horsehead Nebula. She quickly makes her decision and Jackie catches her packing to leave again and begins to cry. It is a scene that REALLY pulls at the heartstrings and makes you wonder at just how much of a draw the Doctor has on Rose that she is willing to leave her family and friends behind just to go on adventures with him. It’s also nicely juxtaposed with the scene where the Doctor is being unreasonably, and most certainly in-humanly cold and indifferent to those feelings. It is a very telling scene written very well to illustrate that although Rose is travelling with him, she has yet to actually have an effect on the hard shell he built around himself following the Time War and his part in it. He is still, at heart, a cold individual who has just seen too much death and suffering to be anything but disconnected from it, lest he go mad with the grief over the death of two entire races. I mean honestly, think about that for a second. When someone in your family dies, you go cold inside. You do everything you can to inoculate yourself from allowing that persons death to consume you entirely. You slowly mourn them, and after a good long time, usually with help from other family and friends, you heal. Now imagine those reactions on a planetary/population scale. The weight of that would be enormous, and the Doctor has (as a result) inoculated himself against the overwhelming sadness he must feel by becoming this cold, indifferent individual.

You also get a smattering of the first real signs that Mickey isn’t just Rose’s scaredy-cat, dopey boyfriend. There are sections of real heroics while helping Jackie, and eventually the Doctor with the fight against the invading Slitheen. These lead up to even the Doctor himself realizing that Mickey (the idiot) may not be the person he thought he was. A plot thread that is laid bare mostly when Mickey himself, after the Doctor invites him to join them in the TARDIS, confesses to the Doctor that such things he just doesn’t think he could handle. The Doctor gives him a look of immense respect, and later when Rose asks Mickey to come along the Doctor says Mickey is a liability and he won’t have such a screw-up in the TARDIS, and the Doctor shares a bit of a wink with Mickey about the lie.

Probably one of the most poignant episodes about the human condition and its core characters, and it is totally disguised as a by-the-numbers alien invasion. How very clever! It also showcases one of the best things about RTD-era WHO (missing from Moffat’s latter Series 5 & 6) and that is attention to family and how they react to a companion traveling with the Doctor in time and space.  To me there is a realism to that that doesn’t exist in current WHO (since not once has Amy or Rory’s families ever been mentioned as wondering where they are) and such notions are well-represented in both these episodes.

Easter Eggs NOTE: The BAD WOLF phrase shows up again, this time spray painted by a kid on the side of the TARDIS in stark white. 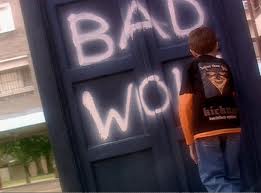 Next Time: One of my favourite episodes named DALEK.

Posted by GunMetalBlue at 7:05 AM