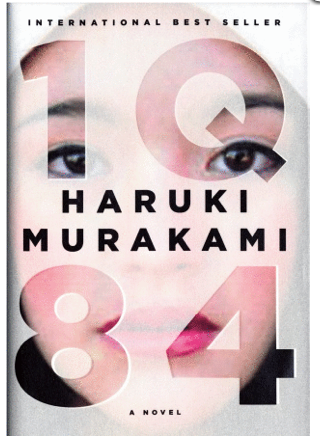 Minor spoilers are within this review, but nothing that will not be appparent in the first few chapters of the book. Still, consider yourself warned.

Lost loves, Parallel 1984's, big brother transmuted into "little people", sexual escapades, insane religious cults, historical literature lessons, pop culture references, and even everyday-ness. I can't qualify a Murakami book, any further than I can actually review one properly, as they are sort of immune to a typical review-style. So this will more be a "thoughts" post doing my best to actually review it.

So this book enthralled and baffled the hell out of me...for the first half or so. At that point the constant repetitive nature of the dialogue ("Are you going there?" "Yes I am going there." "Because you need to?" "Because I need to" "You need to go there, therefore you are going, is that correct?" "Yes that is why.") becomes less quirky and you start to realize that this book is bloated for this reason. If every conversation in this book was short and to the point without this sort of repetition, then it would probably have clocked in 300 pages shorter. That said, this is typical of Murakami's dialogue to an extent, but in his earlier (shorter) novels it stays quirky and readable...meanwhile here it just got tedious for me.

There is also a huge section of lag in the middle of the second part that is devoted to pages and pages of exposition that also doesn't need to be as long. Again, a convo like the above style that I got the point of fairly quickly and wanted to move forward, just goes on and on.

I truly think that Murakami works better in smaller doses. Is this his masterpiece? Probably if you consider how it differs from his previous work, what he was trying to achieve with this work and also how epic the story SEEMS...note that I said SEEMS. For in fact the story is deceptive in that it's not really epic at all, and is at its core a simple love story. There's nothing wrong with that, I just want you to be aware. This book is the love child of NORWEGIAN WOOD and HARD BOILED WONDERLAND AND THE END OF THE WORLD truly. It has pockets of the fantastic, but they are simply parts of the backdrop and never get fleshed out more than a light dusting of info. The "little people" stay as a vague concept throughout as opposed to becoming something more tangible. The other aspects of the 1Q84's world, two moons, air chrysalises ect. are fairly self-explanatory and never required much of the reader to discern.

A love story that reaches heights of far-fetchery

The love story between protagonists Aomame and Tengo is a bit hard to swallow. They went to school together as children and she was mocked for her parents cultish religion and Tengo defended her, so she held his hand and then ran away. They never saw each other again. Tengo teaches at a cram school and aspires at writing, while Aomame is a physical defense instructor with a gig on the side assassinating horrible men who beat and rape their wives or girlfriends. It seems their connection is magical and is a bond that cannot be broken and will hopefully help them escape the parallel alt-1984 (the 1Q84 of the title) and get back home whilst also finding each other. It's sickly sweet at times and kind of goes beyond that totally unbelievable romantic movie love that you never believe in. They are shown to have lived absolutely pointless, indifferent and lonely lives until they are reunited in what both deem as their one true love....though both are decidedly promiscuous until they meet, Tengo sleeping with a married woman weekly and Aomame sleeping with random elderly, balding men she meets in pick-up bars.

Then there is the author of the fantasy book that is within the story named Fuka-Eri, a dyslexic 17-year old girl who hangs out with Tengo, doesn't speak properly and seems to think that the things from her fantasy book (that Tengo re-writes for her and releases to great success) are real. She's....strange, but in a very interesting way. It's really hard to wrap your brain around her character or slap any type of regular character-sketch on top of her since she defies every one, another skill Murakami possesses. She starts off really interesting and moves into the weird sexual arena as well at one point which threw me entirely off as well.

Abandon hope all ye who enter here, AKA Giggety, Giggety

Which brings me to another thing. This book is EXCESSIVE on the sexual scenery front. In nearly every section there is a description of genitalia, sexual encounters, bizarre sexual desires and tastes, cult rapes and the like. Though most of the bad stuff happens off-page (the rapes ect.) and you simply hear about it. It is, however, still there and there is also a bunch of well-described sexual encounters, so no worries on that front erotica fans! This is probably Murakami's most sexually charged work in fact. I'm not saying this is a terrible thing, as I can deal with sexual imagery in books just fine. It's simply on display here in such an excessive amount that I started to wonder if I was reading a strange hybrid of medical journal and erotica. I'm not a prude or anything, I just got to a point after 500 pages and thought, okay....that's good....I'm good for a while Mr. Murakami...and then there would be another scene. I'm reading this on the subway Mr. Murakami! Haha!

I seem like I am getting down on the work, I don't want it to seem that way at all. There is oodles to love here as well. Decent character arcs, fantastically informative sidetracks that include introducing me to some great things, concepts or people (Anton Chekov, A Tale of Heike, Janacek's Sinfonietta, ect.), and also some very riveting and intense sections that kept me reading well into the night.

If you like Murakami, you will like this latest work and may even consider it his best. I don't consider it his best, but it is certainly a big achievement. It is in many ways, unlike a lot of his previous work and on display here are a number of things I was unsure Murakami was capable of, and that shows significant growth as an author and he should be very proud of that. It has a number of sizable flaws in pacing, overdone dialogue and believability of the love story, but overall I enjoyed my time with it. I do feel it went flying off the rails in the second half and was a bit of a train wreck...but it was a Murakami-style train wreck so I couldn't look away and found myself oddly satisfied at the end. Was it believable? Not at all. Was the journey worth it? Oh indeed it was. I did not waste my time with the book. Is it too long? Yes siree, by half in fact. It's definitely bloated and could have been chopped WAY down, and in fact that may be why I feel his prose works better in shorter increments as you don't get a chance to start analyzing.

A solid book, if not the total masterpiece it is being touted as.
Posted by GunMetalBlue at 8:29 AM