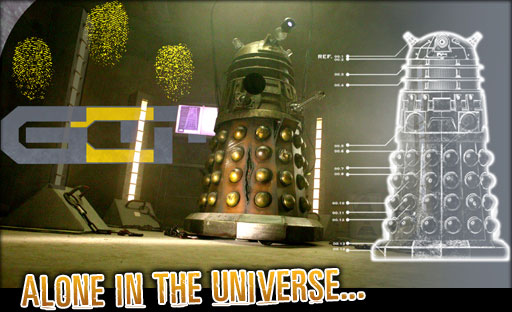 The Doctor’s anger, when properly on display, is a frightening thing. It is powerful enough to wither even the most powerful villain’s resolve, and it is certainly a sight for us as an audience to behold.

Thus do we get to the 6th episode in my Re-Watch of Series 1 DOCTOR WHO. Titled DALEK and written by Robert Shearman (as a special request by RTD himself), the episode is nothing short of brilliant. Some of the very best episodes of this show (especially during RTD’s tenure) are the self-contained, we are stuck in a tight space and something is after us type episodes. Add to this the unleashing of the Doctor’s proper fury and humans being cruel and torturous and you have the makings of incredible television.

Rose and the Doctor respond to a distress signal that is beaming out into space from an unknown source deep under the Utah desert, and find themselves in the lower levels of a multi-level bunker/personal collection of alien artifacts and technology. American billionaire (and supposed OWNER of the internet) Henry Van Statten collects alien artifacts (including a Classic Series Cyberman head, nice touch that!) and stores them underground in his massive complex. He is assisted by numerous helpers and an entire squad of armed guards to keep his collection safe. One of Statten tech’s Adam (Bruno Langley of CORONATION STREET fame) takes Rose o a tour, while Van Statten offers to show the Doctor their only living artifact, an alien they keep chained up and torture in an attempt to find out more about it. That’s where things get interesting, because the live specimen is:

Once the Doctor realizes this fact as he is locked in a room with it he literally FREAKS OUT and shouts to be let out as he is afraid it will kill him…until he realizes that the Dalek not functioning properly and is merely a lost soldier of the Time War who’s weapons systems are offline. At which point something strange happens. The benevolent Doctor, the one who usually tries to save things actually laughs and begins to mock the trapped Dalek. Heckling it, and regaling it with stories it is unaware of, like the decimation of its race and planet and the fact that it is now a roaming soldier with no orders. The Doctor laughs in its face like a bully who has his opponent on the ground. He then attempts to kill the creature, but is stopped
by Van Statten’s guards.

Rose and Adam eventually make their way to the chamber and Adam revels in showing the Dalek off to her, but Rose (being Rose) takes pity on the creature because it is in pain, confused, chained and tortured. It speaks to Rose in human tones and she lays her hand on it…and her DNA/time energy/radiation allows it to re-energize itself and power up. It quickly discovers that it is the last Dalek, and breaks its restraints and begins a rampage.

It isn’t until he gets a chance to explain to Van Statten and his assistants just what this thing is that they start to realize why he behaved like this towards it. I think it all comes out best in a conversation between the Doctor and Van Statten in his offices after they realize that Rose has accidentally awakened the Dalek to its power, and without orders it has defaulted to the prime objective, exterminating all non-Dalek life in the universe:

Henry Van Statten: I thought you were the great expert, Doctor, if you're so impressive, why not just reason with this Dalek? It must be willing to negotiate, there must be something that it needs, everything needs something.

The Doctor: What's the nearest town?

The Doctor: All dead. If the Dalek gets out it'll murder every living creature, that's all it needs.

Henry Van Statten: But why would it do that?

The Doctor: Because it honestly believes they should die. Human beings are different, and anything different is wrong. It's the ultimate in racial cleansing, and you, Van Statten, you've let it loose!

So in this episode we finally see the Doctor’s violent anger. He actually, more than once, tells the Dalek it should just kill itself and die since it has no purpose. He shouts and rages at pretty much everyone in the episode. This is the PTSD Doctor rearing himself to face the camera in all his growling glory. This is a man who thought he’d seen the last of a race who basically caused the extermination of his own Time Lord race, and he’s faced with one of them still alive. His reaction is pure, unadulterated, and passionate emotion. But what is really telling in the episode is not that final reveal of the emotional condition of the post-Time War Doctor and his subsequent actions, but rather the point of the whole episode exists in one single line uttered by the Dalek. After a particularly brutal barrage of nastiness and demands on the part of the Doctor when the Dalek is looking for “orders” he demands that the Dalek kill itself.

To which the Dalek replies with a very even “You would make a good Dalek.”

I mean hell, what a gut punching line that is. Here is the Doctor, finally shedding the emotions that roil within him and allowing that anger out to play onto the very creature who’s race was its cause, and in all his righteousness he loses sight of a very simple difference…that he not act like his enemy…and he has become just that. In fact, if you flip this episode around and presume that the Doctor is the bad guy and the tortured Dalek is the good guy, then the Doctor actually doesn’t come off far from the Dalek mentality at all. What an eye-opener that was. In fact, the only shred of humanity that the Doctor is allowed to cling to is his defense of Rose, his tireless efforts to make her safe (which nearly costs the complex and everyone in it their lives) and his keeping of a promise to her mother. That’s a really nice thread to have come from the last episode with Jackie having been so distraught, that the Doctor actually took notice of something human and allowed it inside his tortured soul. I think this is the first time that Rose takes root in him as an ideal, as a healing notion. This is it, the Doctor has reached rock bottom, and his misery about the Time War has come full circle and confronted him. What’s great about that is that his defense of Rose is his first step on the stairway that leads up and out of that post-war despair into something more powerful, something more generous…the stuff of legends.

This is also the first time we see the classic villain, the Daleks, show up in the re-launched DW. The Daleks scared the bejeezus out of me as a kid, and they are my favourite villain (easily), and when I first watched this episode when it aired on TV I got so excited to see one again after so many years. I got even more jazzed when the Doctor makes a cryptic reference to Davros when speaking with Van Statten. Nicholas Briggs has done various voices on the show, but the Daleks are probably his most well-known, and he does such a stellar job at it!

Probably one of the BEST Christopher Eccelstone episodes that exists in canon. Shearman does an absolutely incredible job at uniting aspects of Classic Who with Re-Launched Who and ties them together with the Time War. I never get tired of watching this episode.

Next Time: THE LONG GAME features a big guest star (Simon Pegg), and the newest TARDIS companion (Adam) finds out that his own personal gain is not a good reason to time travel.
Posted by GunMetalBlue at 8:09 AM