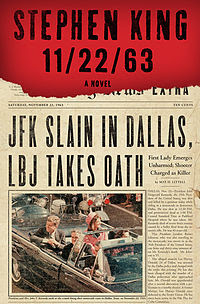 When high school teacher Jake Epping receives a call from Al Templeton, the owner of his favourite greasy spoon diner, he’s more than a little confused. After all Jake isn’t particularly close to Al.

When he meets up with the restaurateur, Jake finds the normally hearty man decimated and apparently dying of lung cancer, with only days to live. Al shows Jake a secret hiding in his restaurant pantry, an invisible time portal that connects to 1958.

With practically his dying breath, Al fills Jake in on his impossible plan to go back in time and prevent the assassination of JFK. Jake, divorced, alone and with seemingly nothing to lose, agrees to take on the mission in Al’s stead and travels back in time over 50 years to save a president’s life, change the fate of a nation and giving meaning to a world gone mad.

A lot can happen in five years and while Jake awaits his chance to stop Lee Harvey Oswald from pulling the trigger he is startled to find himself falling in love with Sadie Dunhill, a statuesque librarian fleeing her murderous ex-husband. But by being with Sadie, Jake could be powerless to stop events from running their course.

The past might not be set in stone, but it will do anything in its power to protect itself.

I hold Stephen King up as sort of the Baby Bear of modern popular fiction, skirting that elusive boundary between too hot and too cold. His writing maintains an even keel in even the choppiest of weather, rarely stooping to shop-worn clichés and sometimes gifting readers with real depth and insight into the characters he writes.

And to those who propose that King is a bad writer I’d suggest in 2011 he’s simply an overly familiar one. After all, with over 50 books and countless short stories to his name, it’s hard to find anything new or fresh about the author’s works. His writerly tics and authorial voice are so distinct that even his new books can feel like something we’ve read previously.

Maybe that’s why I can’t get rid of the nagging feeling of dissatisfaction I’m carrying around with me after finishing up this book.

11\22\63 is ostensibly a period love tale bookended by the trappings of a traditional King pot boiler. While King lures you in with the promise of time travel and alternate futures he spends far more time charting the star crossed romance of Sadie and Jake than he does working through some of the more interesting aspects of his genre setup.

Which is fine, I can roll with that. There’s nothing wrong with an author stretching their legs and exploring some of the untrodden real estate of their craft. I suspect my sense of disappointment stems from the unrealistic expectations I brought with me to the book. I expected hard sci-fi and got QUANTUM LEAP* instead. That’s no one’s fault but my own.

But if I’m being really honest here King shouldn’t get off entirely scot-free. He’s made the classic mistake of falling into the trap that many well researched period books stumble into. King has become so enamoured with his extensive investigation of the JFK assassination and America in the 50’s and 60’s that he spends far too much time setting the scene for his audience and not enough getting on with moving the story forward.

It’s obviously important to King that he is as accurate as possible when recounting Oswald’s life leading up to JFK’s death. But his unwavering pursuit of faithfully recreating a period in American history robs the book of any sense of urgency or drive. Instead readers meander through overly detailed descriptions of mid-century USA punctuated by brief flurries of action before retreating back to explore the book’s romantic subplot once again.

It’s hard to become emotionally or intellectually engaged in this book with such a passive lead character. Jake Epping is essentially a glorified Peeping Tom throughout the bulk of the story, watching history unfolding around him but unable or unwilling to do anything to change it. He’s so busy absorbing the details and waxing romantic about the world around him that he fails to do anything with his incredible opportunity except hunker down and wait out five years until he can make up for his inaction in one incredible go. Jake’s motivation for stopping the JFK assassination is kind of shaky. Sure, we’ve all sat around with friends** and talked about how we’d change the world if we could go back in time. But Jake’s mission was researched, reconnoitred and then dropped wholesale into his lap, without him having to lift a single finger. His immediate and unquestioning acceptance of this outlandish proposition makes for a less than compelling character motivation.

Part of the problem with 11\22\63 is King’s decision to set the exit to his time portal 5 years before the actual assassination attempt. Now I assume he made that decision in part so he could tie the book into the larger Dark Tower universe, by taking readers back to Derry and poking through some of the fallout from his classic horror tale, IT. And it does also doesn’t hurt that having such a long buildup to the main event gave King plenty of time to properly develop and grow the relationship between Jake and Sadie. But in reality with such a long buildup I never got a sense of what was at stake through the book.

One of the themes in the book that King brings up repeatedly is the idea that the past tries to protect itself from being saved. This means that any time Jake tries to make significant alterations to the timeline unbelievable coincidences start to pile up to prevent him from doing anything. Unfortunately for readers the past only fights back at the exact moment the event is about to be changed. It doesn’t seem to believe in pre-emptive strikes. So with a five year head start before Jake has to do anything of substance, besides watch Oswald’s comings and goings from behind window curtains, it never really feels like he’s at risk of not accomplishing his goal.

Oh sure, King tries to spice things up by upping the stakes of his romantic subplot, but that only serves as minor distraction at best. We all know that Jake is going to have his opportunity to stop Oswald. I mean, you don’t write a story about the JFK assassination and then cut it short just because your girlfriend’s ex shows up on the scene. What I would have like to have seen out of the book is a more active representation of the past trying to protect itself. An entity that physically tries to stop Jake or derail his plans long before we get to Dallas.

If you like Stephen King there’s nothing about 11\22\63 that will scare you off. But I will caveat you up the ying-yang. This is not a bad story, it just seems so far removed from the style that King built his reputation on.

What you'll get is a gentler, more mature book that cares less about the things that go bump in the night and more about understanding the people that populate the story. His musings on what life was like in the past are so rose-coloured and syrupy I could hardly believe it was the same unflinching author who wrote stark tales like RAGE or CARRIE. King’s descriptions were so cloying at times, and so unwilling to speak harshly of the era of his youth, that it seemed like he was ignoring the reality of the world he was writing about.

It’s actually pretty logical when you think about it. King is a middle aged author now, who doesn’t have to prove anything to anyone but himself. (A far cry from the booze and drug fuelled angry young author of his earlier books.) It’s only natural that as King grows up his writings will lose some of their reactionary fury.

I’d rather have mellow Stephen King, than no Stephen King at all. But that doesn't stop me from pining a little bit for the return of the writer who wasn't afraid to go places others were to scared to write about.

*Not to run down QUANTUM LEAP. I love the shit out of that show. But QUANTUM LEAP is science fiction for romantics and soap opera fanatics.

**Okay, maybe that was just me.