Doctor Who Re-Watch: Series 1 Episode 2 (The End Of The World) 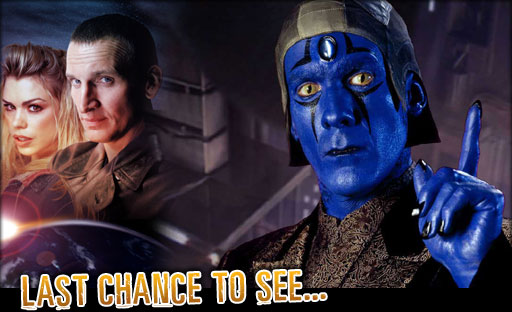 And so we settle into the second episode of DOCTOR WHO Series 1, THE END OF THE WORLD, also penned by Russell T Davies himself. This one is great because it takes place off-earth…sort of.

The Doctor takes Rose five billion years into the future to a space station called “Platform One”. Outside the viewport the earth revolves and the Doctor reveals that it is now owned by the National Trust (love that reference!) and has long since been abandoned by humanity. The empty planet has been returned to a previous glory state and the expanded sun is kept at bay by gravity satellites. Now the money has run out and various alien beings, including the last human Cassandra (now just skin and a face stretched on a metal frame and mosturized) are invited to watch as the satellites let go and the earth is consumed by the expanding sun.

It’s a party! A posh one that the Doctor and Rose only get into by using Psychic Paper (which shows people what he wants them to see as I.D.)

The best thing about this episode to begin with is that Davies (with his eye for small details about his characters) finally has Rose react to being taken this far (in space and time) from her home, amongst weird looking aliens, and all with a man she barely knows. She has a bit of a breakdown, and the Doctor attempts to cheer her up by sonicking her cell phone so she can call 5 billion years ago and speak to her mum. While this seemingly serves to only depress Rose more, it is still a really nice gesture on the part of the Doctor and the cell phone manipulation will come into play down the line. After the introductions have been made and the countdown to the earth’s destruction has begun, little metallic spiders with red laser eye’s are crawling around the station and have begun to dismantle its safety protocols and sabotage it. Safety screens on viewports are downed and people die from the intense suns rays burning them to a crisp including the host. It’s up to the Doctor and Rose to find out who and why.

This episode marks the beginning of the walls the Doctor has built up from his previous experiences starting to slowly come down. The more comfortable he is with Rose the more he seems to trust her.  I actually REALLY enjoy the fact that this is a long process and it makes more sense down the line as to why, but Davies script is clever without revealing too much. The mystery itself within the episode is rather by-the-numbers and its outcome can be guessed early on. That’s not the point of this episode though. The first ep was a little more serious, and so this one busts out into a lot of fun. Here we get to see the Doctor (Eccelstone) mugging about, goofy faced, dancing and bobbing his head to TAINTED LOVE, and even bouncing around to Britney Spears TOXIC. One of my fave bits is during the sequence where each guest is giving gifts to one another and the Doctor offers “Air from my lungs” as his gift. Though gentle with the first guest, on the second guest he breathes a whole swathe of air in a big circle, mouth gaping. It’s quite hilarious! Rose spends some of her time upset about being so far from home, and about not knowing just WHO the Doctor is ( < ---see what I did there?), until she ends up in rather mortal danger and he has to save her. She also shows the first signs of the companion she will come to be as she investigates things and unearths a few bits of important info on her own.

I think one of the KEY things that eventually makes the Doctor and Rose’s relationship so entirely strong is that she KNOWS, without a doubt that if there is a possibility to save her (no matter how dire the situation) then he will, and actually vice-versa. That is a link that becomes unbreakable. Well that link really and truly begins here on a station orbiting a dead planet.

The aliens who play the secondary characters here are all well acted, and most especially Cassandra (Zoe Wanamaker) since she’s basically a bit of skin and a face, she manages to be a very interesting character. This is also the first time we see The Face Of Boe, a character who we will see again and who has a few strong significances within the show. Again, it is nice to see Davies paying attention to the long game of continuity even in episode 2.

Here there be revelations, arrrr!: One of the secondary characters, a beautiful tree alien named Jabe eventually reveals that she knows that the Doctor is a Time Lord, and the last survivor of the Time War. Exactly what that war was is not yet explained, but it’s another piece of the puzzle that has popped up about the Doctor’s past.

After the station is saved and it was revealed who the culprit for the sabotage was, we see the Doctor’s unremitting anger, and this time he is unrepentant and cold about it. Again a nod to the need for a companion to temper that.

I love episodes that end as this one does. It ends with the Doctor confessing to Rose that his planet Gallifrey was destroyed in a great war and that he is the last of the Time Lords. She sympathizes with him as they share some chips on a sunny London afternoon. It’s one of those things that makes Davies’ writing so well timed. Here is the most epic and sad of pronouncements and it’s juxtaposed next to the day-to-day normality of sharing some chips with a friend. He could have just told her he failed a math test. It’s a great scene and a nice ending for the episode.


Stay Tuned Next Time: THE UNQUIET DEAD
Posted by GunMetalBlue at 6:18 AM

Email ThisBlogThis!Share to TwitterShare to FacebookShare to Pinterest
Labels: Doctor Who Re-Watch, Russell T Davies, series 1 episode 2, the end of the world