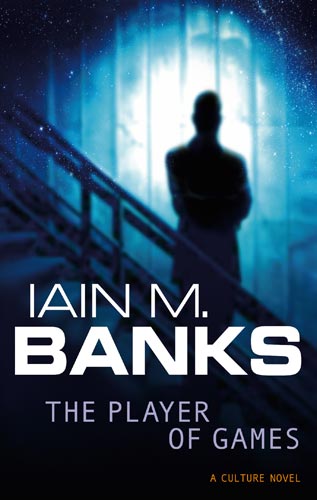 The Culture - a human / machine symbiotic society - has thrown up many great Game Players, and one of the greatest is Gurgeh. Jernau Morat Gurgeh. The Player of Games. Master of every board, computer and strategy.


Bored with success, Gurgeh travels to the Empire of Azad, cruel and incredibly wealthy, to try their fabulous game ... a game so complex, so like life itself, that the winner becomes emperor. Mocked, blackmailed, almost murdered, Gurgeh accepts the game, and with it the challenge of his life - and very possibly his death.

Iain M. Banks is one of those writers that I’ve often heard about and never read. He’s written various sci-fi novels, mostly in a series of books about a decadent human future called The Culture, and he’s also written more contemporary novels (under the name of Iain Banks, no M.). For all intents and purposes since the mid-1980’s the Scottish author has been steadily putting out work and has grown a significant fanbase as a result.

Note: Jacob @ Drying Ink gets a nod for suggesting the one to start with and writing a post that got me interested to begin with. Cheers Jacob!

PLAYER OF GAMES - actually the second Culture novel, though since the books are largely standalone it doesn’t really matter that I began there - was my first taste of both Iain M. Banks and his Culture universe.

The Culture is a human and machine coexistence of a society thousands of years in the future Corrected VIA Wert in the comments below (AKA I didn't write this paragraph, he did): The Culture is a blending of alien (but often humanoid) races and machines. Most of the published novels actually take place in our past (the first, CONSIDER PHLEBAS, takes place in the 14th Century). One of Banks' Culture short stories, THE STATE OF THE ART, charts the first contact between Earth and the Culture, and we learn that Earth joins the Culture off-page in the 22nd Century. Otherwise Earth plays no role in the Culture stories.

The Culture has done and seen everything. Due to massive technological advancements over the millennia there is no longer a need for money as everyone has everything they want, and even death and disease are no longer a worry since as long as your brain survives you can regrow any part of your body. Culture humanoid’s can switch sexes if they like and then switch back. They are seemingly bioengineered with “drug glands” that I assume work in harmony with the body, and can produce any number of pleasant or useful bodily responses. It’s a totally egalitarian society and even conflict is something that you’d have to hunt for. Possessions aren’t really something one seeks to acquire any longer. All the ships are sentient (Minds) and so even owning a ship is not possible. Culture humanoids also live alongside sentient machines called Drones. Drones take many shapes and size - older ones are normally bigger (sometimes human sized), with newer ones able to fit in two cupped hands. They are the machine equivalent to biological humanoids within the Culture, and have full personalities to accompany their metal bodies. They express emotions with coloured fields called “aura’s” and are able to manipulate things with the same type of fields. This is a society where on of the main forms of habitation is on a ring structure orbiting a star as would a planet (Orbital’s). Like a ringworld, the orbital rotates to provide an analog of gravity on the inner surface and experiences clear night and day. Basically the Culture is a totally hedonistic society. You can have anything you like, any time you like, and go anywhere you like.

There, you are schooled enough to start into the Culture books now - though I am sure there is MUCH more to the universe that I simply don’t know about yet.

Now, what is funny is that on the face of it, the idea within the book – that of a man who lives on Chiark Orbital named Jernau Morat Gurgeh – who is one of the best game players in the Culture - goes off to an alien Empire to play their game that actually affects life in said Empire – is actually really simplistic. On its face it’s not even something that would normally interest me enough to pick up.

Then I started to read it. The Culture itself FASCINATES me. The drones, the Ship Minds, the hedonistic humanoid race, the far-reaching decadent society who do things on a huge scale simply because they can.

Gurgeh himself even goes off to play the game in the Empire of Azad for Contact – The Culture’s organization that deals with encounters with other civilizations – because he’s bored. In the first section of the novel it is clear that Gurgeh is entirely going through the motions of his life. Since he can have or do anything he wants there is no conflict for him. He of course needs a push or two to move in the right direction of making the decision to go on the trip, but he does.

The novel is divided into three parts:

1. Gurgeh on Chiark Orbital playing existing games and living his life, showing us the reader how good he is at such things, as well as showing us other aspects of his lifestyle.

2. Gurgeh in the Empire of Azad’s capital city where he learns about the race he is living amongst, their social mores, their cruelty, and just how important the game is to their overall society (the Emperor is whoever wins the game).

3. The final game played against the emperor himself, which not only reveals a few surprises, but also defines the entire book.

The interactions within the book are stellar. Gurgeh is a great protagonist, and his interactions with other humanoids is both interesting and telling. His interactions with the Drones though is what makes this book soar. The Drones who show up initially (including the annoying, but entirely awesome Mawhrin-Skel) and the later ones like Flere-Imsaho, not to mention the Ship he uses itself (the Limiting Factor) converse with Gurgeh to provide much of the humour in the book. In fact a few exchanges between the main characters had me chuckling out loud.

I really, really enjoyed this book. I think it sings with pacing, as not once did I slow down reading it. In fact I think I can safely say I read it in about 5 or 6 hours total, and not one of those felt wasted. Yes, there are slower sections but they only last a page or three and even those are always peppered with little revelations, or conversations that make your ears perk up. It's funny, but the game itself is not even explained all that fully, and I discovered that as I finished the book I realized it’s not meant to be. It’s a prop on stage, and the characters are what I am supposed to pay attention to. Now, I don’t want to spoil anything for anyone who hasn’t read it, but the ending (like the last two pages) changes an already thrilling narrative and makes it be even better and switches the game up of a LOT of things completely!
I am now wholeheartedly looking forward to reading the next Culture book USE OF WEAPONS, and even to the rest of the series. Again I’ll mention that my sci-fi tastes are oddly discerning, but Banks has (with only one book) solidified my spot in his fandom. I would read a bunch of books about The Culture, as I just find it is a wholly interesting jumping off point to a crazy universe.
Posted by GunMetalBlue at 8:00 AM