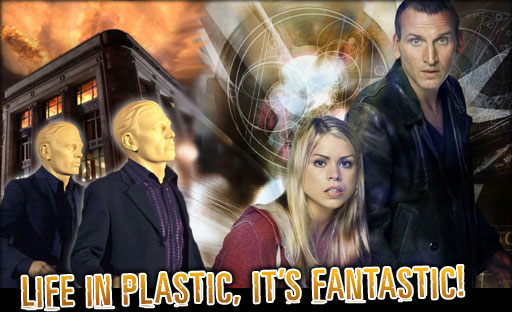 DOCTOR WHO is done for the season (until the Christmas special), and doesn’t look to be really returning until next fall. So what a perfect time to do a re-watch of the entire (re-launched) series and review them. This will happen slowly and sporadically since I will be watching them with my girlfriend (who hasn’t seen any of Series 1), and her sister (who hasn’t seen any of Series 1 to Series 4 or the Specials at all) and thus will it need to be watched time allowing when we are all together. The plan is to watch at least one (maybe two) a week, so hopefully you will get reviews that frequently.

Now, before I get started here I should note that I (of course) have seen all these episodes more than once, but I won’t be spoilerific for anything that comes down the line. I might take note of certain things and how they might be important down the line, but I’m not going to spoil anything outright so you should not worry about that.

Series 1 Episode 1 (ROSE) brings us back into the world we last saw in 1996 (the Eighth Doctor’s one TV appearance). When he appears we have to wonder where the Doctor has been and what he’s been up to since that last adventure.

We are quickly introduced to the character of Rose Tyler. She lives in a working class suburb of London with her mother Jackie and dates a football-loving, goofy boyfriend named Mickey. She also works in a clothing store and it is there that she will have her first encounter with an alien enemy and an alien saviour (the 9th Doctor). After closing the shop and heading down to deposit the receipts for the day she finds herself in an eerie room with plastic shop window dummies, that come to life. A few seconds later as all hope seems lost a hand grabs her hand and she turns to see the Doctor for the first time and he’s got one word for her “Run!”.

It’s kind of funny how that’s the first word he says to her, since “running” chaotically with the Doctor is such a staple of the show. It’s one of the things that makes DW so special in fact since he abhors guns and the like, that he’d rather run, regroup and figure out a better way.

After the initial encounter he tells Rose he has a bomb that he needs to detonate to destroy the plastic beings called Autons. He then leaves Rose and tells her to run, which she does still clutching a plastic arm, and behind her the shop explodes. She walks by a strange blue police box on her escape. The next day, The Doctor inadvertently visits Rose again at her home and ends up saving her from an attack of the plastic arm she brought home. She questions him but he refuses to give her more answers. Later at Mickey’s house she checks the internet for references to someone called The Doctor, and when she searches it in conjunction with “blue box” she gets a hit.  A man named Clive has created a website dedicated to this mysterious figure who seems to have appeared throughout history at pivotal moments. After visiting Clive and finding out that the Doctor has been at events like the JFK Assassination and the Titanic’s launch she decides that something strange is going on. It only gets stranger when Mickey gets taken over by a plastic bin and replaced with a fake plastic Mickey. As fake plastic Mickey nearly kills Rose at dinner out, the Doctor saves her by beheading him. Plastic Mickey head in his hand the two head for his blue box and Rose is astonished to find out that it is “bigger on the inside”. It is at this point that the Doctor spills a BIT of info on himself and tells her he is alien and that so are the Autons. He tells her that they are controlled by a being called The Nestene Consciousness, and if they can find it they can stop the invasion. Which of course they set out to do.

ROSE is the result of a die hard fan, who also happened to be in the TV industry as a writer, named Russell T Davies. His efforts to revive the show (which had been off the air since 1996’s TV movie and from a serial TV show since 1989) began in the late 1990’s (though he had nothing to do with above-mentioned atrocious TV Movie in 1996). It wasn’t, however, until some time in 2004 that his wish would be granted and ROSE would be scripted and shot. Davies, it should be noted wrote this first episode, but was also the overall showrunner as well for the next 4+ Series.

ROSE works an various levels, the first of which is that as a re-introduction of the Doctor character it is a standalone, monster-of-the-week episode. It’s not until you dig into the quieter scenes that you get the writing that allows Rose to see that the Doctor is a force of good, and the excitement that these events bring to her otherwise hum-drum life is intoxicating. Davies script is clever, but solid and un-complex. It has a clear beginning, middle and end. The threat of the Autons is actually wider spread than I think I expected originally. Shown in the 3rd act when most of London is threatened as the mannequins rampage, hands turned into guns. Fists into sledgehammers.

Clive exists so we (and Rose of course) can receive information about the Doctor (vague though it is) so that the Doctor himself doesn’t have to reveal much on his own. The other things I noticed were smallish things, like Mickey as he starts out is a scaredy cat and not much of a boyfriend, and Jackie Tyler shows us that she’s lonely and a bit critical of Rose. The main thing that I like to see is how angry the 9th Doctor is. For reasons we will find out in a few episodes time (and which I’ll share at that point) he is un-tempered and angry. It is also clear in this episode that he has recently regenerated (he looks in a mirror and comments on his big ears) and that he’s not been with a companion in a while. What is excellent is that through all this anger the Doctor still finds it within himself to be true to form, and give his enemy a chance to surrender, and it initially appears as if the Nestene is going to concede, until it finds his TARDIS and becomes scared because it knows what he is and where he is from. That’s a nice clear moment not only for us but for Rose. This is man who can save the day, but he is apparently also someone to be feared if you cross him.

All in all probably one of the best introductions to a new companion and a new Doctor in the show’s long run. It’s a solid episode that I recall made me rather impatiently wait a week to watch the next one. It had everything I recall the show having as a child and added a number of things that made it current, emotional and interesting.

If you have never watched DOCTOR WHO and don’t feel like watching 26 seasons of the classic show first, then this would be an excellent place to start your viewing experience.

I'm going to try to always throw a Next Time trailer in for the episode that is reviewed in each post. Sadly there really isn't one for ROSE as it was the first. So instead I'll put in the Teaser that aired on BBC One for Series One.


Special Note: I think Davies deserves heavy props for mentioning something like The Shadow Proclamation this early when we don’t really find out about it for a few seasons yet.

Next Time: THE END OF THE WORLD
Posted by GunMetalBlue at 7:21 AM