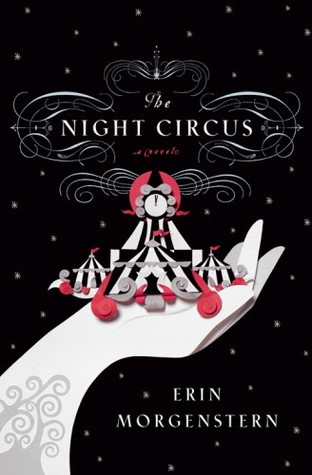 "Opens at Nightfall; Closes at Dawn." The Le Cirque des Rêves is a circus unlike any other, just as this magical debut novel is equally unique. At the center of The Night Circus spectacle are two specially gifted young magicians, Celia and Marco, pitted against each other in professional competition, drawn towards one another in love.

THE NIGHT CIRCUS by Erin Morgenstern (autumns’ “it” book, as well as one of Heather Riesman’s [CEO of Chapters/Indigo] selected picks) is a wonderfully descriptive, interesting story that builds and builds. I think what it comes down to for me is whether you are okay with that build-up not really paying off in the end.

Let me explain that comment. I can see why the book has taken a lot of reading lists and bestseller lists by storm as it’s absolutely charming and magical. It has some of the requisite pieces that make up a great read in the genre (I’d deem this as an attempt at a Gothic mixed with fantasy) real magic, a love story, a mysterious circus that is run and inhabited by odd folk who are destined and determined to be purposely whimsical. It seems made of win to me. At least that’s what I expected when I heard the early buzz and a few other reader reviews. I would imagine those people got more from it than I.

I’m going to break down a few things that stick out immediately in the narrative:

There is No World Building.

In a fantasy book, especially one where there is a purported real magic being used, the author should really give a little back story. If magic is that ingrained in humanity that some can really manipulate it, then tell us how. We are asked to take the two initial players in the game (Prospero and the Man in the Gray Suit) as magic users who are going to pit their charges against one another in magical competition. Though we are never more than introduced to the vague idea of this before it is simply a face-value idea. Morgenstern seems to say to the reader “It is, because I say it is”. There are no stories of past magic, or any real history at all. This almost immediately disconnected me as a reader. It’s almost as if she wanted magic in the story but didn’t want to do the extra work of telling us the “how” of it.

The weird thing is that almost the entirety of the book consists of the two protagonists Celia and Marco using the circus to create rooms that are prettier or more interesting than the other VIA magical means. So that means long descriptions of things in lieu of actual competing. It would be as if two painters were each painting a piece every few weeks and then displaying it in a room for the other to look at in an attempt to one up the other with their skill. The main problem with such a competition is one of subjectivity obviously, but the second wider issue is that this amounts to not so much as a competition as it is a slow-roasted, ever-changing slightly exhibition of art. It could have been SO much better. At one point early on Celia, for example, uses her flung black topcoat and turns it into a raven, or in another instance she idly dances paper into shapes on a table. Marco does things early on as well, like covering a young woman’s eyes in a rainy London street and has her open them to a wintry, sun winked forest glade, all an illusion made by Marco. I imagined that these sorts of magic acts, simply against one another, would comprise the narrative and I was sadly frustrated by the altogether more “still” nature of the magical competition. This is the equivalent of Merlin holding aloft a carved piece of stone for Arthur to see and saying “Look, I carved this with magic!” You can imagine Arthur’s initial reaction would be “How?” Well here Morgenstern never gives us the how.

While it might be an interesting “idea” to have a love story develop between two competitors in a magical exhibition, the execution (at least here) leaves a bit to be desired. Celia and Marco spend nearly the first half of the book oblivious of one another. Neither finds out the other is their competition in the game until roughly that point. Sure, Marco dotes on her looks and is quite taken with her…but Celia is oblivious. In fact she doesn’t exhibit so much as a batted eyelash to anyone for half the book. She seemed quite “loveless” to me, and that is made all the more jarring that Marco (who already has a little side gig with the clingy Isobel) seems so smitten with her from the outset. When it comes to them realizing one another as competition, the “relationship” then begins to grow due to said unique circumstance, but it feels oddly stilted right out of the box. It’s almost as if Morgenstern decided that the continual one-upmanship between the two was enough as a sort of flirting, but I can’t say it ever passes as such. I personally think you ought to FEEL a love story right in your gut. It ought to feel as if these two don’t end up together you’d be utterly heartbroken and it doesn’t do that at all. At best they stay competitors who awkwardly flirt.

The Build Up and the puff of smoke.

The entire narrative really does feel as if it’s building towards something. Some sort of clever “I didn’t see it” twist, or at least some sort of resolution that would make the story worth telling. It chugs and chugs and chugs away and by the time I arrived at the end I thought, “That’s it?” It definitely reads like a gothic tale (in the vein of books like SHADOW OF THE WIND, or THE THIRTEENTH TALE), but the aspect that makes those so wonderful is that there was a point to them and THE NIGHT CIRCUS doesn’t have that. Here is a mysterious circus that opens at dusk and closes at dawn, is run by the rich and indulgent elite, and employs actual magic users. Here we have characters who have been pitted against one another, we have twins born on the night the circus opened, we have various outsiders forming societies and clubs about the circus. It’s all incredibly fascinating…or at least it would be, if it really went anywhere. Think of the book like this: If all the above things I mentioned existed and there was somewhere a huge leather-bound volume chronicling the place, then THE NIGHT CIRCUS would be a smallish chunk in the middle that Morgenstern has portioned out to us. To some that might be enough, but to me it simply isn’t.

I want to be fair though as this review makes it sound as if I really disliked the book. On the contrary, I quite enjoyed the descriptions and the charming characters (yes even the main protagonists, sans their stilted love story) and the idea contained therein. Even the magically created rooms from the competition are lushly described and told with aplomb for language and visuals. Morgenstern can really write, and the book can even be deemed as a page-turner as I kept compulsively reading it late at night. My issues as mentioned above might not affect the casual reader and not everyone is going to be as discerning as me about my gripes. The book is a wonderful tale, it’s just one that doesn’t go to any lengths to inform you about a great many things, nor does it feel the need to give you an ending that can be described as all that satisfying. The word that jumps out of my head most is descriptive. That’s what this book is; a snippet of (what I have to assume is) a huge chronicle that encompasses a long history of magic and one of indulgent circuses, performers and business-folk…that doesn’t tell you much beyond the snippet.

A good book, simply not one that I feel is worthy of the hype and indeed a certain type of reader will lap it up and love it I am sure. Sadly, I am not that reader.
Posted by GunMetalBlue at 11:52 AM