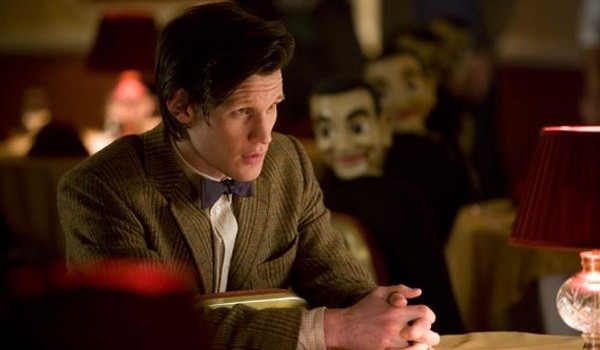 Writer Toby Whithouse, who is probably mainly known for his show BEING HUMAN in the UK (and its well-adapted US Version on SyFy), has written a few DOCTOR WHO episodes before. While I really enjoy his Series 2 contribution, SCHOOL REUNION, for bringing Sarah Jane Smith and K-9 back into the DW universe, his Series 5 episode THE VAMPIRES OF VENICE was only so-so. So, a fifty-fifty track record going into this past Saturday’s episode penned by him called THE GOD COMPLEX.

The good news? It was a great, insular, standalone episode.

The bad news? There isn’t any, it was pretty fantastic throughout.

The great news? It ends very poignantly, and while the rest of the episode seemingly doesn’t touch on overall Series story-Arc, the ending certainly does, more on that later.

The Doctor, and the Ponds arrive in what appears to be a hotel circa-1980’s, but quickly realize that it is nothing of the sort and is in fact some sort of alien construct designed to resemble a hotel. In the lobby they quickly meet some other trapped folk. Humans Rita, Howie, and Joe, and the alien Gibbis (from a world of weak-minded servants). They discover that the lobby is covered in framed pictures of previous trapped people who evidentially have succumbed to some sort of fate. The four others claim to have been there for a long time and that each of them have a “room” in the hotel that calls to them and makes them want to go in (each room being a manifestation of their worst fear), but if they do some supernatural alien beastie (who looks like a big, grizzly, badass minotaur) will eat them. So they keep running avoiding the creature and their rooms. The place is a labyrinth (Minotaur!) and once they leave the lobby even the TARDIS is lost. Once the Doctor tries to figure out what’s really going on the fun really gets into gear.

At once scary, emotional and poignant this episode has everything a great DW episode ought to have. A well-created, scary beast who you don’t initially see very well, a well written plot including a number of nicely fleshed out characters with fairly distinct personalities, and a mystery for the Doctor to really sink his teeth into. Whithouse, already adept at a dramatic narrative that includes humour, is on form here as each scene left me feeling quite satisfied.

Like THE GIRL WHO WAITED last week the ending is a really well-crafted sequence that completely fits into the narrative strand that was the bread and butter of THE GOD COMPLEX as a whole, but also into the Series’ overall arc in such a clever way that I was definitely impressed.

I always talk about the main actors involved and how stellar they normally are, but here it’s nice to see some bit players (AKA the other folks in the “hotel”) get A LOT of screen time, giving Amy and Rory a bit of a rest on the back burner mostly. That said, of course Matt Smith is once again totally on his game. Every time I think that Smith has been madcap for too long he changes it up to be frightened, or emotional.

I’d like to talk about one more thing, but I feel it would spoil something in the episode so I won’t really go into it here. Sufficed to say that Matt Smith solidifies something that David Tenannt’s Doctor used to profess quite well, and this is the 3rd episode he’s done it in and I find myself LOVING the connection to that aspect of the Doctor’s psyche.

So, a really solid episode all round. One of the better ones this Series definitely.  Now I await next week’s CLOSING TIME which features the return of amazing James Corden, reprising his role as Craig Owens from last Series’ THE LODGER, and it looks like he works in a shop and has issues with Cybermen!
Posted by GunMetalBlue at 5:57 AM