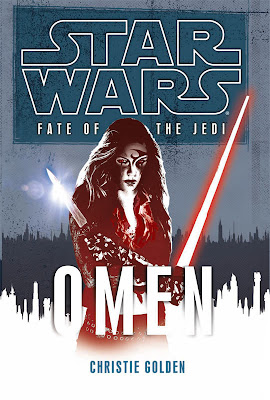 Okay, I have always been somewhat of a proponent of supporting the STAR WARS EXPANDED UNIVERSE in the literature vein. I’ve read a solid number of the books. I’ve made mention in previous reviews some of the major issues I had with the 9-Book LEGACY OF THE FORCE (LotF) series, and I’ve even gone into my issues a bit with the slightly better follow-up 9-Book series FATE OF THE JEDI (FotJ).

After trying to get into the 6th book in that most recent series VORTEX I’ve had a few major realizations about these long series. We all know they are padded with filler. That’s no secret. LotF was the same, as was portions of the NEW JEDI ORDER (NJO) series that preceded it (though not to the same degree). That brings me to my first point in this somewhat rant-ish post.

What a thing to realize. Seriously, I don’t think it is too much to ask to have a SW series that isn’t 9 books long just to make money. Let’s face facts, LotF and now FotJ could very well have been tightly written trilogies. Hell, even NJO didn’t really NEED to be 19–books long. Why someone decided (I don’t know who) at Del Ray that the STAR wars universe of books was going to be populated by a spat of interesting stories that are quite seriously dwarfed by the amount of pointless filler stuff I’ll never know.

NOTE: Spoilers for up to at least the LEGACY OF THE FORCE series below.

Second point. Someone needs to sit down at Del Ray and write this sentence in big block letters on the blackboard with every author who writes in the universe in attendance:

STOP WITH THE REPETITIVENESS.

As it was with the LotF books, so I am finding that at the 6th book into the FotJ series, EVERY DAMNED book has the same essential plot throughout.

1.     One (or two) Jedi(s) go mad VIA some plague that makes them think every one else is a fake copy, even family.
2.     Chief of State Daala continues to try to get her hands on all the mad Jedi and imprison them, making boneheaded decisions along the way, and using the media to make the Jedi look bad.
3.     Han and Leia (and sometimes Lando) with young Allana Solo in tow either stay at home and try to thwart Daala, or travel to another planet to thwart Daala.
4.     Allana (in one of the above two situations) gets into some sort of Solo-like mischief with 3P0 and R2 in tow, only to need saving.
5.     Exiled Luke and Ben meet with, are wary of, ally with, fight against a Lost Tribe of Sith, including blatant and poorly disguised future Ben love interest/poor copy of Mara Jade character Vestara Khai. (Seriously, I am just waiting for her to have a Blue Lightsaber at the end of the series)
6.     A Force being (Abeloth) stuck in the Maw is making all the above happen to probably conquer the galaxy.

Next book in the series? Rinse and Repeat the above while adding a few tweaks to disguise that this is actually what is happening. Making us think we should be buying the same hardcover book nine times.

As to story points, ignoring things that stand out like sore thumbs from the previous series...Daala as Galactic Alliance (GA)Chief of State choice when she is a bloody super villain and a war criminal…Boba Fett's inclusion had NO BEARING on the plot WHATSOEVER...Jacen’s fall to the Dark was worse than anything in the entire EU thus far, was silly, overly political and ultimately a pointless waste of a good chaarcter other than the jump start a reason for things to happen in the FotJ series (and make another Skywalker/Solo turn to become a Sith)…FlowWalking (Jedi In-The-Mind-Time Travel), really, REALLY?...I could go on.

Essentially this series is expounding itself on the “why” of Jacen’s eventual turn and it happens as Luke and Ben SLOWLY visit every planet Jacen had visited during a sojourn he took years back from which he returned altered (leading Luke to believe it holds the answer to why he went bad). One Jacen-visited planet/people per Book. Seriously, that is the algorithm. Not joking. Adding in things like the Lost Tribe Of Sith, or A Nexu pet for Allana (the cat thing from the arena on Geonosis during EPISODE II), or Mandalorian commandos, the Nightsisters on Dathomir, or even a team-up between Jedi and Sith to defeat a bigger threat is all totally falling on deaf ears to me now. If the plot hasn’t REALLY moved forward in 6 books time…there is a problem and no amount of treats you include in the narrative are going to make me any less frustrated.

Abeloth. The theory is that this tentacled, female, dark force presence (mentioned a number of times prior to this series) that is stuck in the Maw (and is our Big Bad in FotJ) attempting to grab the galaxy by the crotch VIA the Jedi is actually a Celestial. A race of ancient beings who existed before the galaxy was colonized who created things like Centerpoint Station and Sinkhole Station, and may even have created/used the Maw to contain Abeloth’s evil. Now to me, if you WANT to make Abeloth interesting then here is a genius idea…EXPLORE her past. Xenoarcheology about the Celestials would be pure WIN. Luke and Ben should have switched gears after book 2 or 3 and started investigating the Celestials. What an amazing plotline that would have been, with them slowly discovering and unraveling a vast web of mysteries surrounding the creatures that existed before time began, through ruins and archeological treasures. That sort of millennial archeology is what makes the Space Opera’s by people like Alastair Reynolds, Peter F. Hamilton and James S.A. Corey so incredibly compelling! You could spend books on discovery alone and it would never need to repeat itself or become stale. You don’t even NEED the Galactic Alliance plotline. The Jedi’s are mad on Coruscant, so allow the Jedi Council to contain them with Ysalamiri creatures (force negation) and be done with it. Once caught they can’t harm anyone, and Luke is looking into the “why” of it as it obviously has to do with Abeloth’s reach and therefore the Celestials imprisonment of her. No seriously, we all know that is where we are headed, and I'm convinced it's going to be explained away with a sentence or two in the last book when it could have been SO much more! Why the political plot-stream at all in fact? Daala and her machinations, the GA and people of Coruscant and ESPECIALLY the non-starter, lame as hell News Media characters, none of them need to exist at all aside from basic gov’t running. It’s no secret that the majority of the political aspects of the entire series are basically just BORING.

Also, LET JAINA DO SOMETHING OTHER THAN FAWN OVER JAGGED FEL! No honestly, She's supremely badass, has been fighting in wars since she was 14, so why as an adult is she relegated to the role of indecisive fiance/girlfriend of Fel and not much more. Let her DO something FFS. Her plotline is the most disappointing to me in this series.

I honestly don’t think that it’s that difficult to come up with something that isn’t the same, repetitive stuff series in / series out. In fact, while I am on the subject, why does EVERYTHING that happen now in the SW EU have to be some Galaxy-threatening, society-ending, apocalyptic event or problem? What’s wrong with self-contained standalone issues? Why does everything have to be all or nothing these days? There is only so much that one book series can take. If you think about it chronologically, the STAR WARS universe has been under some kind of galaxy-threatening evil (not including Vader and Empire) for…42 years in their timeline (almost continuously) and over 20 years in ours. At what point do they get the peace they have sought since before the Clone Wars? Just because there is no Galaxy-threatening menace doesn’t mean we can’t have great little standalone (or even duology or trilogy) stories or smaller menaces. When does Del Ray realize that they can’t keep shoving the same book at us over and over and over again.

At a certain point this STAR WARS fan is going to have to simply say “no more”. If I have to sit through one more boring, repetitive book I think I might give up. I had high hopes for the FotJ series feeling that anything could be better than LotF, but aside from a few interesting things it’s been more of the same…just dressed up with some fancier clothes with some more badass plot-points to make it seem like I’m not being tricked. I’ll be finishing the FotJ series, but I won’t be buying it in Hardcover anymore and in fact I might just buy them for my Kindle instead cause no one should have to pay $35+ repeatedly for the same damned book.

To end on a lighter, more happy note: The books written by Matt Stover, Michael Stackpole, James Luceno and of course Timothy Zahn are normally fantastic and those guys seem to produce some of the most successful enjoyable books in the entire EU
Posted by GunMetalBlue at 11:17 AM