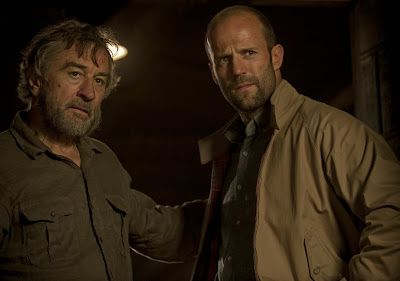 The problem with KILLER ELITE is that it’s actually two distinct films rolled into one. Rather than successfully fuse the two films into a genre bending mind-splosion of cinematic greatness ELITE chooses to simply flip back and forth between genres like a kid watching his Saturday morning ‘toons.

Jason Statham is Danny Bryce, a (former) killer with a conscience who’s been pulled back into the game of international assassinery in order to rescue his old mentor Hunter, played by a woefully underutilized Robert DeNiro.

A fairly straightforward revenge-style political thriller plot here with lots of room for room for potential. Only the filmmakers decide to muck it all up by imposing on Bryce a set of incredibly complicated criteria that must be applied to each victim.

First of all, as a reform(ing) killer Bryce has a thing about a not killing innocent victims. Now this would be great if innocent victims was code for babies and puppies and people who’ve never been in the SAS. But unfortunately Bryce chooses to apply this to any and everyone who isn’t the exact target he’s been hired to kill. This means that Bryce has to wade into a hornet’s nest of brutal psychopathic killers, all of whom are out to rend him limb from limb, but he can’t kill actually any of them, even when his life is being threatened.

A strange reaction for a lead in a film called KILLER ELITE.

All together now, hand, head, grimace.

Secondly, Bryce has to extract a videotaped confession from each soldier and each death has to look like an accident, to prevent suspicion from being cast back upon our scheming oil baron.

Apparently Bryce is such an effective killer of people that the only way to slow him down long enough to make the killing audience friendly is to place him square in the middle of a series of increasingly elaborate death traps. These excessive restrictions only serve to complicate the plot and don’t add a whit of tension to the film.

Anyway, the first half of the film is all about this espionage stuff. Mostly set in London, all very dirty and grimy, but none of it very exciting.

Then, all of a sudden, its like the producers took a look at their leading man, screamed “HolyshitballswehaveJasonStathaminourfilmwheresallthefighting!?”, and cranked the volume up on the film to 11.

After that KILLER ELITE becomes quite a different film all together, it turns into the Jason Statham action punchfest we all know and love. The only problem is the audience has been lost with the film’s listless build-up that we don’t really care anymore. By the time Statham gets around to leaping buildings and shoving broken chair legs through the faces of our tough as nails SAS soldiers its too far too late. We’re bemused by the films futile attempts to switch gears and all we can do is cast furtive glances at our phones, waiting for the credit sequence to roll. (Which is a bit frustrating considering the film has three separate and distinct end sequences.)

There’s precious little to recommend about this film. It never actually approaches out and out bad, but it is so unfocused and unable to make use of its considerable acting talents that it probably seems more underwhelming than it actually is.