TV Review: Doctor Who - The Girl Who Waited 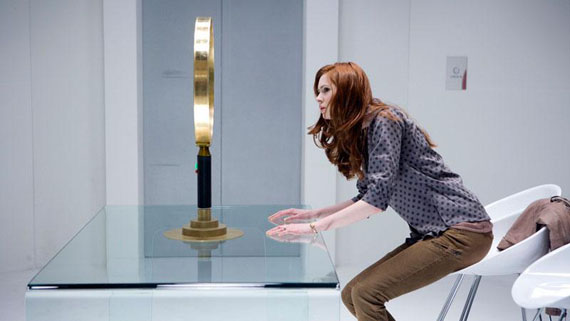 I’m a couple of days late on my review of THE GIRL WHO WAITED, because I hadn’t watched it on the weekend like normal, and yesterday I was home sick (which turned out to actually be my first experience with yearly allergies, Great) and wasn't near a computer to write up my review.

It gave me a chance to have a few minor discussions with folk who watch DW, about the episode. Mainly that we were ranking it as a really high Ep and that it was one of the best of Moffat’s tenure as showrunner, but with a few stipulations attached to that. Let me 'splain.

So Tom MacRae wrote this one and I believe it’s his first foray into the DW world. He’s crafted an episode that definitely sits amongst the highest this Series (with THE DOCTOR’S WIFE), but also is one of the first times the Moffat-run series has come close to stuff like BLINK, or MIDNIGHT from the RTD-run era. Was it perfect? Nope. Was it worthy? Oh yes.

The Doctor and the Ponds arrive on (what the Doctor deems to be a holiday planet with lots to do) Apalapucia to find themselves in a stark white set of rooms initially unaware that there is a plague on the world. Amy gets separated into a different time-stream-room. Follow me? So Rory and The Doctor start to search, Amy in her faster time stream spends her time escaping from robots that are attempting to administer a vaccination against the plague that will kill her because of her human physiology. The Doctor could be killed by said plague (because he is a time lord) and so he stay TARDIS-bound and sends Rory out (with TARDIS-connected glasses so he can view the proceedings) to find Amy. But what happens in the hours it takes Rory to find her….with her in a faster time-stream?

A great, tense episode, with incredible sound and visual design aspects. The Handbots aren’t QUITE creepy enough, but they serve their purpose, however the real story is Amy and Rory as the latter looks for the former. At heart this is an emotional story about love and the boundaries it is willing to cross. Like I said above the REASON this episode works is in what happens in the last few minutes. I won’t spoil anything here, but the last probably 5 minutes are the best part of the narrative and it’s where MacRae shows us how he really shines as a writer. For up until that point I was finding the episode enjoyable, but nothing uber-special. What happens in those waning minutes moved it from good episode to absolute greatness. All three characters, The Doctor and both Ponds perform EXCEPTIONALLY well in those last scenes. I think Rory especially gets to totally shine in this episode as a whole, this is all him and Arthur Darvill should be exceptionally proud of what he accomplished here and where he took Rory. I want to also note that Karen Gillan goes above and beyond here as well and while it is certainly Rory’s Episode, Amy is the catalyst for Rory and she achieves new heights as an actress in this one. The Doctor is in it less than the others (is this s proper Doctor-Lite episode?), but I think when he IS in it, Matt Smith delivers another amazing performance especially in that aforementioned ending.

All in all a fun episode that goes from quite good to stellar easily and will probably be remembered as one of the best this season had to offer in the latter half. So well done to all involved, and here is hoping that MacRae writes another episode down the line since it appears he really has the chops to give us something different, exciting and memorable.

Though I am still on the fence about Chris’ complaint that Amy and Rory seem less concerned about their baby (Melody) when it comes to these standalone episodes. It’s hard to complain when I WANTED standalone episodes, but after two I’m starting to doubt Amy and Rory’s investment in their child. I mean I know who she turns out to be, and that the Doctor said she has her own path to blaze…but why is there no mention at all? In fact, it might have been prudent to add Melody as a variable in the decisions made in THE GIRL WHO WAITED…just a thought.
Posted by GunMetalBlue at 9:00 AM

Email ThisBlogThis!Share to TwitterShare to FacebookShare to Pinterest
Labels: Doctor Who, Review, The girl Who waited, tom macrae