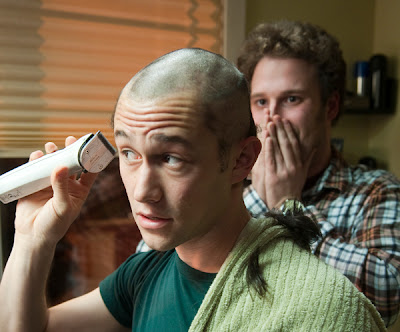 50/50 is a the note perfect tale of Adam, portrayed with skill and subtlety by Joseph Gordon-Levitt, after learning that he has a rare and aggressive form of cancer.

Initially optimistic about his chances of beating the disease Adam remains cheerfully defiant in the face of the long odds, the titular 50/50 referring to Adam’s chances of survival. Led by his flakey artist girlfriend Rachel (Bryce Dallas Howard) and his stoner best bud Kyle (Seth Rogen) Adam’s friends and family rally around him to help him through this difficult time.

But as Adam’s disease begins to take a noticeable physical toll his personal life begins to break down as well.

As the harsh reality begins to set in Rachel’s affection for Adam crumbles in the face of his physical needs and his emotional neediness. Finding comfort in the arms of another man her affair is only revealed after Kyle spies her out on the town with her new beau. Betrayed and alone, Adam’s mental state begins to mirror his physical one.

It’s only in his one on one sessions with rookie therapist Katie (Anna Kendrick) that Adam manages to find a measure of solace with what is happening to him.

This movie is easily the best thing I’ve seen at TIFF this year. Be careful about watching this film if someone close to you has cancer. With its low key approach and improv-edy elements, 50/50 will find a chink in the armour of even the most emotionally distant film audience.

Given that I’ve seen Levitt in challenging work at TIFF as far back as 2001 I think it’s unfair that I keep mentally classifying him as that ‘weedy kid from THIRD ROCK’. He’s long ago shown that he is more than capable of handling demanding roles of depth and complexity. Rather than using 50/50 to mark his debut as a serious dramatic actor the role merely cements a truth that’s been self evident for a long time now.

Seth Rogen deserves a nod here as well. Resurrecting his stereotypical improv stoner persona straight out of 40 YEAR OLD VIRGIN and KNOCKED UP Rogen plays a crucial role as the film’s light hearted cut up. Without Rogen to provide a necessary stress release outlet 50/50 could easily be caught up in its own subject matter and turn the movie into an unrelenting piece of bleak misery. Instead Rogen’s character allows the audience to release all their pent up emotion in a cathartic belly laugh or two without undermining the dramatic tension of the film.

50/50 is an honest and unflinching examination of what it’s like to have one’s life ripped apart by the unrelenting scourge of cancer. While there are a couple Hollywood clichés at play here, mostly in terms of supporting character stereotypes, that doesn’t mean the film is soft selling us on the horrible fallout that the disease brings. And even if it seems inevitable that the writers will stop just short of following the film’s terminal trajectory to its bitter end that doesn’t mean that the journey the audience takes to get there is diminished in any way.