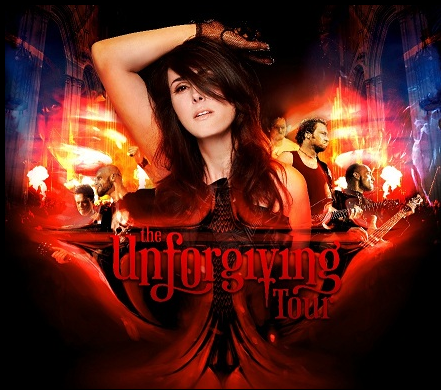 I did a post a few months back on one of my all-time favourite bands ever, WITHIN TEMPTATION which you can read here if you haven’t done so already. In that post I mentioned I was going to be seeing them live In September. Well I did that last night. Let’s see how it went shall we?

First of all, the entire band was completely on form and nearly blew the roof off the place with awesome.  Every song, every note, every lyric was spot on amazing and I was pretty much in seventh heaven for a few hours.

We arrived somewhat after the door opened and only stood in line for a few minutes outside as the line moved past security. Once inside we noticed that the upstairs was all black curtained off and even downstairs the one end where there is an extra bar was black curtained off. On the best of days Sound Academy (formerly The Docks…which is how most of Toronto usually refers to it) is an odd looking venue. It’s not pretty and while it is functional, it doesn’t have the charm or architecture of a place like Massey Hall or even the Queen Elizabeth Theatre. That said, last night’s show with all the gawdy areas and things blocked off with sweeping long black curtains gave the place a much nicer and effective gothic air and that was really nice to see. If I go to a show where I want to buy merch I’ll usually find the merch table/booth first and buy my things right away as the lineups are always less. To my complete and utter surprise though the merch line curled all the way around the Front Of House (audio booth) and was probably 40 people long. I got in line and after about 15 minutes I was able to buy my shirt and get a beer with my friends. 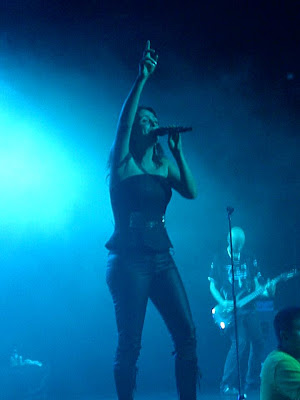 In a charming nod to the country the band hails from (The Netherlands) they were selling tall boy cans of local Toronto beer Amsterdam (created by a transplanted Dutchman) which is tasty. So we found ourselves a spot at the back of the crowd and waited, but one of my friends said that the last time she was there they stood right up front to the side of the stage and the view was amazing.

So we moved. To front stage left and I ended up being about 15 feet from the band, and when Sharon came over and sang to us directly, or when Ruud would stand at the edge wailing on his guitar we were like 3 feet from them. I was considerably impressed with our new spot and how incredible the band sounded.

Setlist was as follows:

Stairway To The Skies

So not only a very respectable mix of the previous albums, whilst still hitting up a number from the latest disc, but we got TWO encores. You read that? TWO. I hope this means we cheered loud and made the band feel very welcome on their second time in Canada ever. They were phenomenal, and the short movies from THE UNFORGIVEN were really well used and not intrusive at all, helping to open the show and then to give us a midway point. Well done on that front.

Sharon’s voice is heavenly. Every note to me was pure perfection. No matter how crashing the guitars are, or thundering the drums and bass are, she can always get above it all and sing her heart out. She is a force to be reckoned with on stage and I was so pleased to have finally gotten to see her live. She’s also absolutely, stunningly gorgeous in person and has an energy that is entirely infectious. If you weren’t jumping and shouting and singing for the opener, you sure were when she came out and got everyone into the concert mood.

I also feel like I ought to mention that Robert and Ruud were both amazing on the guitars and both (it should be noted) play SEVEN string guitars. Holy – shit. And they can totally wail on them. The guitar solo’s were incredible, and the drum’s and keyboards were consistently amazing as well all the way through the show.

I’m still kind of feeling the excitement today more than 12 hours later. The songs are all still rollicking around in my head, and I still have a level of energy inside that wants to escape. Thankfully, I have iTunes open and I’ve been listening to their entire discography today to remind me what an excellent show they put on. A no-holds-barred spectacle of the highest order. The stage may have been simple (in comparison with the elaborate Black Symphony tour) with the phoenix logo from THE UNFORGIVING serving as a backdrop, but the band blasted out the music for nearly two hours to a pleased and excited nearly sell-out crowd.

In the end my ears were happily ringing, I was slightly buzzed from the alcohol, but I wouldn’t have traded last night for the world. It was an experience I won’t soon forget. We left the place at around 11PM and I walked out grinning and clutching my new WITHIN TEMPTATION T-shirt. Yeah, I’m a fanboy, I’m aware.

If you ever get the chance you really have to see them. Barring that, find yourself a copy of the Black Symphony DVD or BluRay so you can at least get a taste of why this was so incredible.

Now, the video we shot on my girlfriends phone (the video on mine sucks) was a little too blown out to post here, so I found someone on YouTube who posted a more decent set of videos. So here's the band performing one of their classics ICE QUEEN. Enjoy!

Posted by GunMetalBlue at 7:24 AM