Music Spotlight: Within Temptation (including thoughts on their latest CD) 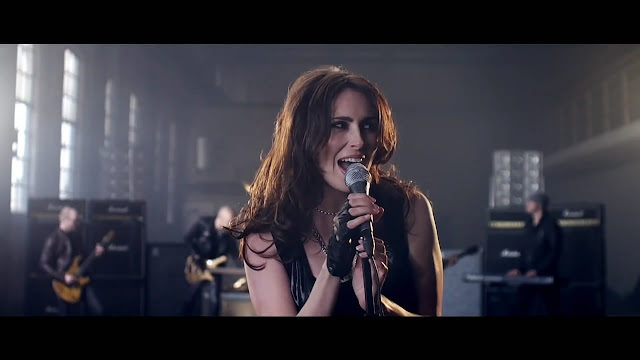 My road to discovering WITHIN TEMPTATION is a curvy one, so I thought I'd lay that out first before getting to my thoughts on their latest CD.
I remember the first time I ever heard of the genre loosely known as Symphonic /Gothic Metal, and that would be in the 90’s in reference to an American band (you know who I am speaking of) using said style to make what seemed to be great music. It wasn’t till that bands’ (okay, I'll name them, it's Evanescence) second CD came out that everyone realized the obvious. The songs all sounded the same and the music was bland, the guitar and drum work was tired and the vocals were identical from song to song. In retrospect, after said band imploded from infighting (and even spawned another similar band…that surprise, surprise sounded the same and flopped), I found that even the first CD that was such a huge hit is really fairly repetitive. I have to credit them (very reluctantly) for introducing me to said genre and making of me a fan, without which I might never have found the best of the best.
Here was a heavier band, with dark tones, and female lead vocals…perfect for a fantasy nerd like me.

However, it wouldn’t be until the new millennium that I would discover the other bands who would take over this genre. These newer bands would mold it, shape it, and perfect it making it not only into a viable side genre, but creating some of most compelling and wonderful soundscapes in the process.
I discovered bands like NIGHTWISH, DELAIN, and EPICA all on my own, and started a collection of their discs. All are great bands and do the genre proud, but in late 2009 my girlfriend had a party where my mind was to be changed about who was the best of the best. One of her good friends (now a friend of mine as well) lives and breathes this type of music and he asked me if I’d ever heard of a Dutch band called WITHIN TEMPTATION. I believe I may have cocked an eyebrow at him quizzically and replied that I hadn’t. He pulled out his iPhone (ah technology), rolled up an older album by them and played me a song or two (I think from the album ENTER or THE SILENT FORCE) and with the phone pressed to my ear so I could hear it over the commotion of the party happening around me... I heard them for the first time. I was almost immediately hooked. I went out the next day and bought two CD’s (the two most recent at the time) THE HEART OF EVERYTHING and the live double disc BLACK SYMPHONY.
I spent the next few days listening to these two CD’s exclusively, and I was rather gobsmacked. Here was a band that not only did this genre that I loved right…they’d pretty much perfected it. I was mesmerized as I walked down the street with this audio kickassery pumping through my headphones. Sharon Den Adel’s lead vocals are completely angelic, sublimely powerful and even angsty and throttling when the song calls for it. The guitar-work is amazing and storied, the percussion is thrumming and tsking in equal amounts, and the classical elements (Violins and cello’s ect.) only add depth and cinema to already thickly layered music. In latter albums you can add synths to that layering, adding an electronic aspect to some tracks. This all makes for a band that grows with each successive release and solidifies their niche and fanbase. This is evidenced by the fact that they sell out shows around the world when they tour.
Well, they recently embarked on a new concept album journey. The new disc (which is accompanied by a six-issue comic series written by Steven O'Connell, and inked by Witchblade artist Romano Molenaar and 3 short films) was a calculated risk for the band. Concept albums normally either do extremely well, or flop on their faces. Thankfully, the disc (and concept) has been really well received across the board by fans and critics alike.  For me though, the new CD, titled THE UNFORGIVING, is actually nothing short of brilliant. The concept idea is that there are some very broken people in the world who die unredeemed for bad things they did in life (this due to bad decisions they made and not because they were inherently evil or anything). They are therefore resurrected by a character called Mother Maiden and sent to fight the evil's in the world and by doing so redeem themselves. This is such a great concept, and something I would relish reading even in a book. Redemption is one of the most powerful things that can conduct a person's actions and to lay that out with music backing it just works incredibly well! So, what is a really interesting concept as an idea, end up one that even works better in execution. I’ve not yet read the comic (because I want to wait for it all to be released before reading it), but the three short films (all of which lead into music video’s for FASTER, SINEAD and SHOT IN THE DARK respectively) are shot incredibly well and come across as fleshed out versions of the concept itself. Directed by a visionary named Joeri Holsheimer, they are all black and white, all shot with a non-linear, yet stylistic edge, and they bring you right into the mindset the band must have been in when they wrote the music. That’s an achievement, as with a concept album that is the best you can hope for. You want fans to get right into the story and see what you were going for. So rather than just hear the music, they can experience it as a combined and solidified idea. I think the short films definitely DO that for THE UNFORGIVING. 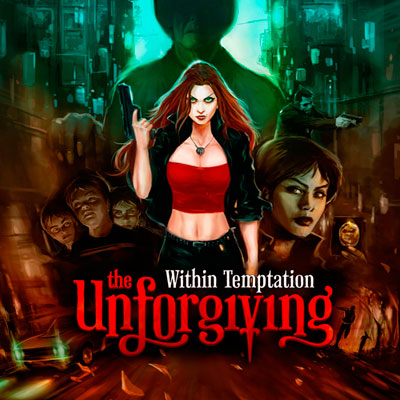 The tracks themselves are all quite catchy, with great hooks and melodies behind them. The sound is slightly different than what the band has produced in their previous albums, and I personally love when a band modifies their sound into something new without losing what it is that makes them who they are. It's a fine line and WITHIN TEMPTATION rides it with ease it seems. The production is so polished that I think I’ll be hard-pressed to find another CD in 2011 that I will enjoy as thoroughly as I enjoy this disc.  It has earned high critical marks from the various review magazines and sites with much the same praise as I am laying out here.
The plan is to continue the concept into the live show when they begin to tour this fall. I haven’t the foggiest what that will entail, but I am sure it will be a spectacle and one which I am LUCKILY going to see first hand when they come here to Toronto in September! I will of course chime in after that show and let you all know how it went and how the Mother Maiden/Redemption concept is translated onto the stage.
One thing is for sure, WITHIN TEMPTATION'S fanbase was already fairly big, but if they continue to release such outstanding music as is on this release, then I am sure they can expect that fanbase to grow in the years to come. I’m lucky to have discovered them myself, and in a world where there is so much generic pop on the radio, it’s nice to know that something different is only a set of iPod headphones, and a Dutch CD away.

You should definitely look them up yourselves as you likely won't be disappointed. In case you are wondering though, I've embedded one of their more recent videos below. Enjoy!

Note: The pictures and the video are in no way owned by me and are copyright of their respective owners. Within Temptation's latest CD is released in North America VIA Roadrunner Records.
Posted by GunMetalBlue at 5:53 AM

Email ThisBlogThis!Share to TwitterShare to FacebookShare to Pinterest
Labels: Review, the unforgiving, Within Temptation