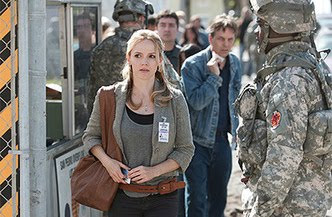 This will be a spoilery review, so if you haven’t yet seen the fifth episode of MIRACLE DAY either stop reading now or resign yourself to having a couple key plot points blown.

Only five episodes in and TORCHWOOD has finally ditched the excessive expositionary talkie-talkie and delivered the audience some much needed walkie-walkie. The show rips the fledgling team apart and decides to run ‘as it happens’ 24-style concurrent plot lines rather than subjecting the audience to yet another yawn inducing team gabfest.

The government, along with some generous help from the pharmaceutical giant PhiCorp, has developed new guidelines defining what constitutes life and death after Miracle Day. (Which, when you think about it is really tricky in a world where no dies.) Anyone marked Category 1 (brain dead) or 2 (severely injured) is shipped off to an overflow camp set up to relieve the strain from overcrowded hospitals. The Torchwood team decides to investigate the camps. Gwen flies back to Wales to investigate the camp her father has been shipped off to while Rex, Vera and Esther take a closer look at the Los Angeles incarnation.

(I think we’ve come far enough as a TV going audience that when we’re shown ‘camps’ where they gather a lot of people together against their will then something really bad is going to happen. Overflow camp is only a hop, skip and jump away from concentration camp and we all know what that means.)

With everyone poking around in their own little corner of the globe the team becomes fixated on discovering what the mysterious hidden Modules, set up in each camp, are all about. Meanwhile Jack sets about tracking down Oswald Dane (yes, again) to try and convince him to use his position as PhiCorp’s spokesperson to reveal the truth about the Miracle Day to the world. Oswald rejects Jack’s offer and instead delivers a speech during a PhiCorp rally claiming Miracle Day is simply the next step in man’s natural evolution.

As the team gets closer to discovering the truth behind the modules Vera makes a fatal mistake, provoking the head of the L.A. camp into shooting her after she discovers he has been keeping sick patients in deplorable conditions. Since he can’t kill her his solution is to put her in one of the secret modules, which turn out to be full of terminally ill category 1 patients. Of course the modules are actually giant ovens designed to turn the comatose into ashes and TORCHWOOD gets to carry on one of its longest running traditions, gruesomely disposing of a member of its main cast.

I’d argue it was the wrong cast member, but your mileage may vary.

I like my sci fi with strong undertones of social relevance and Russell Davies never fails to deliver. His shows are never just about the surface storyline. There’s always a deeper meaning at play and MIRACLE DAY is no exception. This season comments on American health policy, the danger of capitalism when left unchecked, the power of the media, the allure of celebrity and a host of other social issues, which are woven into its onscreen DNA. It’s a bold choice, especially in the face of the unrelenting puffery put out by most American broadcasters. Yes, TORCHWOOD is trying to break into the American market, but it’s doing so by holding up a mirror to American culture and asking the audience to look long and hard at some of its excesses. The show exaggerates for the sake of entertaining the audience, but it doesn’t take a genius to peel back the narrative and spy the inspiration for the story points quivering underneath.

There are a couple plot beats from this week’s show that strains my credulity somewhat. It boggles the mind to suggest that PhiCorp thought they’d be able to keep giant Nazi style concentration camp ovens a secret for any length of time. I highly double after, what, a week without death, that anyone would settle for a population control solution which has roots in such a black time in human history.

But really, that’s TORCHWOOD’s entire reason for being. Showrunner Russell. T Davies isn’t here to hold your hand. When TORCHWOOD first started airing I was put off by the show’s excessive bleakness and depravity. Spinning out of DOCTOR WHO as it did I wasn’t able to reconcile it’s inherent darkness with WHO’s more lighthearted approach.

It didn’t help that Jack was constantly appearing on both shows, further muddying the thematic waters.

But I’ve come to appreciate TORCHWOOD on its own merits and realize that the show is able to take a more honest and critical approach than WHO ever could. If DOCTOR WHO exists to explore the nature of the universe and discover the best of what humanity as to offer; then TORCHWOOD is all about shining flashlights into dark and grubby holes and making sure we acknowledge our more destructive tendencies.

It doesn’t have the best snappy banter or fill us with warm fuzzies, but TORCHWOOD is that rare televisual beast, a show that tries to personify huge, difficult to define and unwieldy social issues into a rallying call for change from the viewing audience.