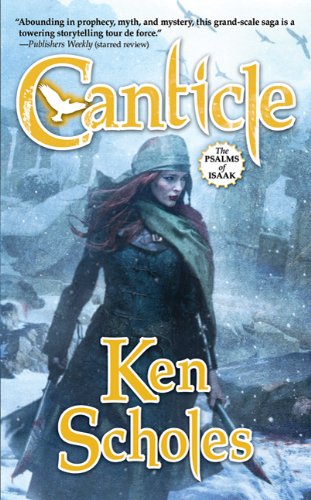 It is nine months after the end of the previous book.  Many noble allies have come to the Ninefold Forest for a Feast in honor of General Rudolfo’s  first-born child.  Jin Li Tam, his wife and mother of his heir, lies in childbed.

As the feast begins, the doors of the hall fly open and invisible assassins begin attacking.   All of Rudolfo’s noble guests are slain, including Hanric, the Marsh Queen’s Shadow.  And on the Keeper’s Gate, which guards the Named Lands from the Churning Waste, a strange figure appears, with a message for Petronus, the Hidden Pope.

Thus begins the second movement of The Psalms of Isaak, Canticle.

CANTICLE sat in my TBR pile for a long time. I read and thoroughly enjoyed the first book in Ken Scholes “Psalms Of Isaak” series, LAMENTATION, about two years ago. CANTICLE sat only because I had so many books come out and with beginning this site and all, it’s been a busy year. Not an excuse, I know. At any rate, I finally made time for this one and I’m quite glad I did.
Of Metal Men and Gypsy Heroics
The characters come alive a little more in this volume in the series. In the first book I feel that only Jin Li Tam, Petronus and Neb really get fleshed out at any decent level for most of the book, but here in CANTICLE all the other characters including Rudolfo, Lysias, and especially (Marsh Queen) Winters get significant time to grow and deepen. We learn Rudolfo’s fears about his infant son not to mention his upset about the Tam family’s involvement in his destiny which has levels and flavors to it. Winters story in this one is probably one of the most rewarding, as she spends time with her love Neb, then with her own people in the North, and finally alongside Jin Li Tam and the Gypsy Scouts as the true revelations about who is causing upset in the Named Lands begins to come to the fore. One character without a POV who I nonetheless REALLY liked was Gypsy Scout Captain (son of previous Captain Gregoric) Aedric. He is actually shaping up to be one of my favourite characters in this series. He’s got enough of his father in him whilst being his own man that I can’t help but be impressed by him. If you were concerned about the lack of depth to the characters in the first volume, then rest assured CANTICLE goes a long way to shoring up those inadequacies, putting most characters on an even keel. Isaak also rocks in this one just like he did in that last one, I mean I think Wert said it best when he coined the phrase "It has robot monks"! You can't go wrong with that.
Why Ye Torturous Dogs!
One thing everyone seems to mention when reading this book is the fact that one main character spends an inordinate amount of time being tortured by unknown tormentors. It’s fairly gruesome (but not to me, I’ve read Bakker, Abercrombie, and Morgan) and probably not for the faint of heart, but it’s not over the top and is dealt with in a respectable way. What’s really thought provoking is that Scholes has done this to this character to change said characters' mind about how things should work in the world. It’s impressive because of just how believable that makes it. In the real world changing someone’s mind that has been so set in their ways for a long time would take more than a little prodding, and this brings a realism to that change that I found quite refreshing.
Do you have any sevens? No? Go Fish.
The overall plot of the Psalms of Isaak moves forward a large amount in this book, but there are still more mysteries and new plot threads added to the fray as well. That’s a touchy thing though, simply because if an author keeps the reader completely in the dark for books on end it can become VERY frustrating. I think Scholes rides the fine line between giving too much away and keeping his secrets. Whilst playing his cards quite close his chest he still gives us enough to keep us interested not allowing us to want to give up on his narrative. That’s really good, if sometimes still frustrating because we want to know what's going on. There are more decades old machinations revealed here and things seem to have been set into place years ago. There is a fair amount more action in this book than the first. The opening action sequence at the Firstborn Feast is amazingly realized and a blast to read. There are other actions sequences sprinkled throughout, but the novel never loses its “slow burn” mentality that seems to be Scholes’ bread and butter. I like that this series is like that as it allows me to enjoy something wholly different in the fantasy genre.
Final thoughts
CANTICLE is a great follow-up to LAMENTATION. It builds on relationships in the world and events in that 1st book. It takes a life of its own as well, visiting previously unseen places like The Churning Wastes and the Islands off the western coast. New factions come into play and the new evils are addressed. Prophecies and portents abound and Scholes revels in creating a work that has religious, historical and mysterious overtones that left me enthralled. Ken Scholes writes books who's greatness actually sneaks up on you when you aren’t paying attention and nips you in the ass.  After you finish you sit there a little stunned. Now, I’ve got to get my hands on a copy of the 3rd book ANTIPHON and continue my journey through the Named Lands and The Churning Wastes, mechoservitor puffing and steaming at my side.
Posted by GunMetalBlue at 11:12 AM