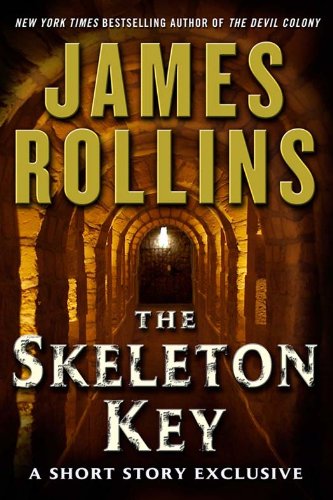 Seichan is ripped out of the Sigma series for an adventure all her own—but can she survive? The beautiful and elusive assassin wakes in a hotel in Paris with a deadly electronic collar fastened to her throat. Joined by a boy who is similarly threatened, she must rescue the son of a hated enemy, who has fallen under the sway of the nefarious leader of an apocalyptic cult. To survive, she must venture into the dark world beneath the City of Lights, into the infamous catacombs of Paris. Caught between two enemies, she must fight for her life…while time ticks down toward a fiery apocalypse. But in the dark, surrounded by the moldering bones of the dead, even success does not equal survival. In the end, the only true hope for the world lies in a stunning act of betrayal.
For me, reading James Rollins novels (especially the Sigma ones) is like sitting down in an easy chair and having someone administer an adrenaline shot directly into my chest. The pace always rockets, the history and technology comes fast and furious, and the characters literally leap from the page into your head.
Seichan (Is she bad/Is she good-girl) is no exception from that. In fact, she's quite thrilling all on her own!
Rollins latest Sigma book THE DEVIL COLONY is set to drop later this month, and I of course (as I am every summer that his new books come out) am literally salivating to read the next adventure starring Grayson Pierce and the rest of the Sigma crew. Ever since I randomly picked up MAP OF BONES on a whim a number of years ago at the bookstore I have been a huge Rollins fan.
Tying directly into the next book, Rollins has just released a short story starring the aforementioned bad girl/good girl Seichan called THE SKELETON KEY in eBook form exclusively. At the bargain basement price of $0.99, how could I resist downloading it for my Kindle.
I’d say it took me about an hour or so to read it and what a thrilling little story. It’s really nice to see Seichan (a character we don’t know an awful lot about) a little more fleshed out and in the driver’s seat of this particular tale. What I especially like about her is that she has less hesitation about pulling the trigger than some other folk might have. It’s shoot first, ask questions later. I don’t want to make her sound cold though, it’s more that she’s quick and clever. In the situations she gets put into in this story she has to think on her feet, one false move and she’d probably be quite dead. This is a rocket-paced read and one that has a couple of neat little twists and a few unexpected actions. The action itself is set in the Paris Underground and is well executed and totally believable. As with all Rollins work there are aspects of history and technology that pepper the narrative and make things even more interesting. Funnily enough there was just recently an article about the "off-limits" areas of the Paris Underground in an issue of National Geographic which I read, so that helped me to visualize.
All in all a very enjoyable little tale with some cool info, great pacing and dialogue.
Make no mistake though; this is most certainly the opening salvo of the new Sigma book. Seichan’s base reasons for even going to Paris in the first place are what set the entire adventure off and those lead right into THE DEVIL COLONY. So you can actually consider this like a secret pre-prologue prologue and it works really well on that level as well as on its own standalone story level. Rollins has done what a good author does when they write a short story within an established world and written a bit of in-between book information that fits snugly between the last book and the next book.
I really enjoyed this look into Seichan’s head, the racing through underground Paris and (to be quite honest)...the Peugot 508 and its excellent real life Bond-like feature.
Now, I am a total purist. Meaning that even though the short story came with an excerpt from THE DEVIL COLONY I need to resist it. I never read excerpts at the end of mass market paperbacks of the next book in the series, as I’d rather read the entire volume fresh. The issue here is that it’s like trying to resist a particular favourite snack or dessert. I have a fair amount of willpower, but I’m not made of stone either. I have held off so far, but between now and June 21st I hope I don’t cave.
If you have read the Sigma series up to this point and are looking for a taster to get you going for the new book, look no further than THE SKELETON KEY as it is a thrilling, fast paced and action packed read.
Posted by GunMetalBlue at 6:08 AM