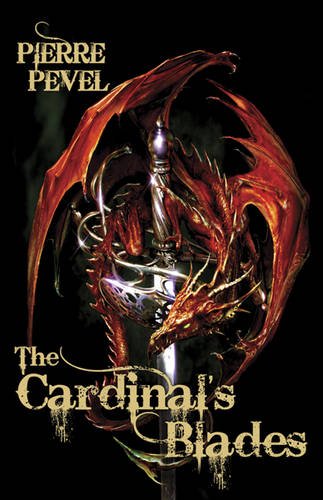 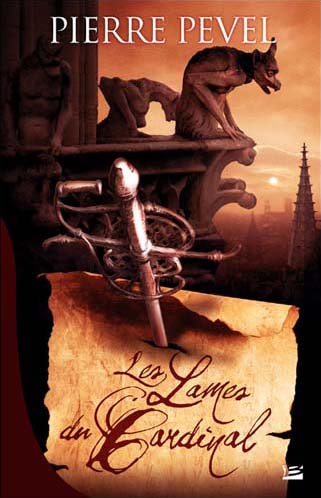 Welcome to seventeenth-century Paris, where intrigue, duels, and spies are rife and Cardinal Richelieu's agents may be prevailed upon to risk life and limb in the name of France at a moment's notice. And with war on the horizon, the defense of the nation has never been more pressing.
Danger is rising from the south—an insidious plot that could end with a huge dragon-shaped shadow falling over France, a shadow cast by dragons quite unlike the pet dragonets that roam the cities like stray cats, or the tame wyverns men ride like horses, high over the Parisian rooftops. These dragons and their descendants are ancient, terrible, and powerful ... and their plans contain little room for the lives or freedom of puny humans.
Cardinal Richelieu has nowhere else to turn; Captain La Fargue and his elite group of agents, the Cardinal's Blades, must turn the tide. They must hold the deadly Black Claw cult at bay, root out traitors to the crown, rescue prisoners, and fulfill their mission for the Cardinal, for their country, but above all for themselves.
It's death or victory. And the victory has never been less certain.
When my reading starts to stagnate, usually after a particularly great book or simply from reading overload, I tend to have to hunt for satisfaction. It normally takes a while and sometimes I read something so-so, just because I can’t find anything that settles me down into my reading groove again.
This happened recently, and it was the latter situation of reading overload/exhaustion. I needed something new, and different to occupy my time. Thankfully I stumbled across a random review of French author Pierre Pevel’s book THE CARDINAL’S BLADES. And consider me quite a satisfied customer!
Translated from the original French by Tom Clegg, the novel is a lovingly realized, gorgeously written feast. From page one, the characters, starting with Cardinal Richlieu and the commander of the Blades LaFargue, are amazingly realized. Clegg’s translation feels French without seeming to fall into the literal-translation-canyon of disarray. It’s very deftly done in fact. I knew I was reading a novel written in French, and that’s part of the charm and a testament not only to the translation, but to how nicely written the original text must be.
Though as I said above, realized, each of the characters (especially the Blades themselves) can fall into an Ocean’s 11, or Dirty Dozen stereotype. They all read as the various tropes you’d expect from an ensemble team, up to and including the debonair womanizer, and the gruff surly Captain. I wouldn’t say this detracts from the enjoyment of the story, but it is basically what you expect it to be.
The Dragons, Dragonette’s and Wyverns have been added as an interesting type of background wallpaper. They are never truly in the forefront, and really are only there to provide an element of the fantastic to an otherwise historical thriller. That’s not a bad thing mind you, as it’s that very subtlety that makes them such a charming addition. Then there are the half-bloods (Dragon Human hybrids) and Dragon’s disguised as humans posing as nobility in Spain and France that add the antagonistic element to the story. Belonging to a sect called The Black Claw, these characters are quite truly evil and come across as such cleanly with no greys. Some stories benefit from such straightforwardness in its villains, and this one certainly does.
If I had one more serious complaint, it’s that the story spends an awful lot of time on the set-up. Uniting the Blades after a 5-year hiatus and dis-avowment VIA the Cardinal takes nearly half the book to rectify and assemble the team. This long set up is saved by the odd chapters sprinkled through this where the bad guys are positioning their pieces and the Cardinal is dealing with a devious traitor in his midst. I’m not saying that each Blade character’s intro to the story is not good, just that these could have been a tad shorter and we could have got the meat of the story quicker. However, past the halfway point the pacing jumps and the story starts to contain all kinds of great stuff.
A swashbuckling tale is one that I relish. Being a fan of Dumas, this one especially hits home for me on the enjoyment level. I love the D’Artagnan Romances, and THE THREE MUSKETEER’S especially. In fact, keep your eye peeled for a rather nice cameo about halfway through. I couldn’t help but smile at that. The story and characters pound around being all manner of roguish, swordfighting, thieving, whoring, drinking, fighting, musket ball firing awesome.
Pevel has crafted a very readable, if somewhat by-the-numbers story with swashbuckling musketeers, scheming nobles and politicians, whore’s with hearts of gold and a team of misfits who are the best of the best at what they do. A very great opening chapter in what I know to be a trilogy of books, the second THE ALCHEMIST IN THE SHADOWS is already out, and the world awaits the 3rd.
I for one, plan to totally go on with the series. Aside from a few little issues I had, this was a decidedly fun and adventurous romp through the streets of 19th century Paris.
If you haven’t yet heard of Pevel’s series, and you are a fan of swashbucklers, this will be totally up your alley.
Posted by GunMetalBlue at 7:34 AM