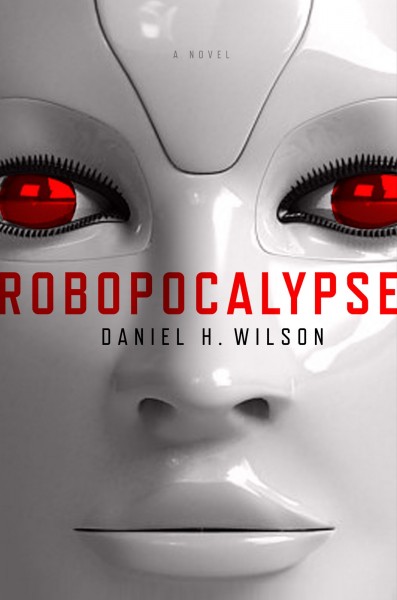 There I was standing on the subway and staring at me was a grayish-white plastic, seamed robotic face with red eyes. The poster for the buzz-worthy book ROBOPOCALYPSE by Daniel H. Wilson. Here was something that sounded hella interesting and was apparently optioned by Steven Spielberg for a movie based solely on 100 pages of the book before it came out. That’s kind of astonishing.
So intrigued by the poster, the blurb and the buzz that seemingly surrounded it, I had to grab myself a copy of it. So off I trundled to the book store. Later that night, nose tucked firmly into the pages I got a hint of what the buzz was all about.
Told in the form of a dossier of collected material about a war with an AI run amok and its subsequent turning of every bit of robotic tech on the planet against us, this is at once a completely arresting narrative that will hook you from page one.
Cormac “Bright Boy” Wallace, a soldier in the New War (the war against Rob [Robots] and Archos, the AI that started it all), after the war ends has found a cube. A black box, which contains the dossier pieces in the forms of interviews, surveillance videos, news reports, depositions, and even eyewitness accounts all recorded by the robots themselves of what it deemed as the “heroes” and the “survivors” of humanity. Each chapter is bookended by notes from Cormac which sort of acts as the fill in the gaps of the story between the events the dossier documents.
A few years ago a scientist in a remote Alaskan lab attempted (for the 14th time) to activate a being of artificial intelligence without it wanting to annihilate humanity within minutes. Archos keeps seeing “life” and loving it. The problem with that is that history teaches it that humans exist to kill. So for life to flourish, humans must (logically) be exterminated. The first 13 times the scientist shuts down Archos after it decides this, but on the 14th activation it tricks him and escapes. The subsequent events with robotic and computerized life across the globe being turned against us is where we begin in earnest.
The storytelling style of these dossier fragments, which in other stories might not work, REALLY works here. Wilson shrewdly gives us everything we need to see both sides of the conflict from the outset to the closing without needing to draw anything out too long. So all the gaps in the storyline over 3+ years of stories about various personages involved actually help the pace move along at a clip that will have you reading and not stopping. A REALLY interesting facet of the story is how a large chunk of the characters (from different places around the world) fragments are interconnected in some way, not just because the war connects them, but also because that’s how Archos would move from one thing to the next. There’s a progression there that just works for how an AI would move from one person or action to the next, and in doing so would connect these people who either knew each other or were closely connected VIA some other way.
The characters themselves are all entertaining and all have distinct, compelling personalities. I think Takeo Nomura, a brilliant robot repairman in Tokyo, Japan is especially realized. In the former human world he is treated with derision and is the but of jokes, but in the post human New War society he is not only a leader, but also a genius and a savior. Through that change his personality NEVER wavers. It’s nice to see an author pay that much attention to personality traits. The characters from the Bright Boy squad and the Gray Horse Army go through some decent character development, some going from pretty much shits to upstanding and heroic people.
The action is really well realized and Wilson’s background in actual robotics gives him the edge on storytelling featuring robots. Every scene in which we either get a robot described, or from a robots POV it’s always totally believable and feels very realistic. I love the way he has robotic and computerized aspects of society that are totally believable to us today in 2011…and then the mods start to come and they make perfect sense as well.
This will make a decidedly great robot movie. In fact as I was reading it I kept thinking here is the story that will shame Terminator as it actually goes into the guts of the “why” and the “how” a Skynet-like intelligence would turn against us. In those movies it’s always this relatively anonymous and utterly evil AI, whereas Archos never feels as such and instead is kind of sympathetic, in a strange way. In that Archos’ goal is “life”, and it just so happens that our blood-soaked human history works against us and doesn’t fit into the puzzle pieces of “life” that it assembles. This is definitely a cautionary tale, but one where the villain isn’t a clear black and white entity. There are shades of gray all over the volume and that only add more depth to an already layered story.
What really works I would say is that this has summer blockbuster written all over it, and not just as a book but also as the future movie. Certain scenes and ideas are going to make this one to look out for on the big screen, especially with Spielberg at the helm.
If you like Robots at all and apocalyptic fiction then this book is totally for you. A wondrously imaginative read, with good characters, and a cautionary tale of a narrative that will make you think about just what it is to be human on this planet.
Posted by GunMetalBlue at 5:45 AM