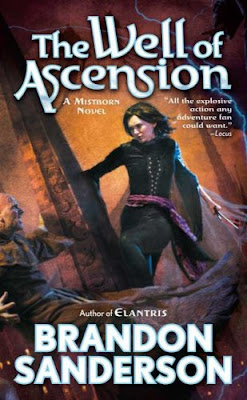 WELL OF ASCENSION (WoA) is the second novel in Brandon Sanderson’s Mistborn trilogy.

Those of you with enough time on your hands can read my review of the first entry, MISTBORN, here.

WoA picks up roughly a year after the events of MISTBORN.

Elend Venture has freed the skaa, brought stability to Luthadel and the Central Dominance and managed to cobble together a working government with himself as King.

Most days Elend has enough problems just trying to keep his government from tearing itself apart due to its own naked self interest. When two warring armies deposit themselves outside his front door he finds himself struggling to keep control of his Assembly, who would rather quietly surrender then fight for it. But who should they surrender to, the bloodthirsty Straff Venture, who just happens to be Elend’s father, or the crippled and enigmatic Lord Cett. Elend cobbles together a plan with the help of the remnants of Kelsier’s former crew to keep the Assembly occupied and play the two besieging armies off against each other.

Meanwhile Vin continues to develop her own Allomantic powers, honing them on her nightly patrols of Luthadel. Burning pewter to stave off exhaustion she still manages to spar with the mysterious Watcher who haunts the rooftops of the capitol city. Vin senses a change in the mist and all around her she perceives a great Allomantic pulse rippling through the city.

In the Southern Dominance Sazed, Vin’s former teacher and steward, is approached by Marsh to explore an abandoned Canton of Inquisition building. The two men find the building deserted, but Sazed locates a metal inscription that purports to be the chronicle of Kwaan, the Terrisman Worldbringer who first predicted the rise of the Hero of Ages.

(Look, I’m going to go out on a limb here and assume that you’ve read the previous book, because all the recappery in the world isn’t going to help that last sentence make sense unless you’ve got previous experience with the story.)

Leaving Marsh behind Sazed decides to return to Luthadel. On his way he notes a pair of disturbing observations, that the ubiquitous mists are now coming during the day and that an army of koloss, bloodthirsty semi-human savages, are on the march towards the capitol city.

Back in Luthadel Elend has been deposed because of his refusal to surrender the city. Freed from the restraints of royalty he casts about for other ways to serve his people and begins to fortify the city against the attack that he knows is coming. But time is running out, the armies are growing restless and it seems that no one has the will to stand-up for the skaa.

Beset by enemies both inside and outside their walls Vin, Elend and their allies must work quickly to put a plan in place that will return Elend to the throne and protect the people of Luthadel.

This is a much better book then the first entry into the series. Gone is the idiot primer that helped readers understand the properties of Allomancy. This leaves more real estate to actually tell a story.

Unfortunately, the romance novel motifs from the first book are still at play. Vin and Elend spend a LOT of time staring off into emo-space, questioning their abilities, their partner’s love for each other, their place in the world and so on and so forth. A little self doubt and uncertainty make for flawed characters and good readings. Too much self doubt makes Vin and Elend sound like whiny emo crybabies and bring the story action to a halt.

(It’s clear why Sanderson makes such a great replacement writer for Robert Jordan’s WHEEL OF TIME series, some of his inner monologues could be lifted directly from the Rand ‘al Thor school of self doubt.)

There was more than one occasion when I wanted to shout ‘Just get on with it’ as we evidenced, for the umpteenth time, just how conflicted these characters were. A little more restraint on the depiction of their inner turmoil would have gone a looong way to heightening the inter-character drama.

I also feel that a lot of conflicts for the main character group smacked of similarity. One invading army is tense, two invading armies has the potential for multi-pronged conflict, but throwing a third invading army into the mix, no matter how scary and frightening, just seems repetitive. Especially when you consider that for the bulk of the novel the armies just sat there and didn’t DO anything.

But I have to give Sanderson kudos for not being afraid to shake up his supporting characters. A number of his larger second tier characters, ones I would normally identify as being safe from any real harm, actually end up dying in the book’s final conflict. Rather than using the threat of death as a toothless danger he lets readers know that no one, well, almost no one, is safe. Seeing supporting characters dispatched in these numbers is a rarity for an ongoing series and I admire him for the choices he’s made. A lot of these deaths will clearly have ramifications for his surviving characters and could make for interesting growth in the next book.

An interesting read and I’m looking forward to the series final entry.
Posted by Chris at 8:55 AM