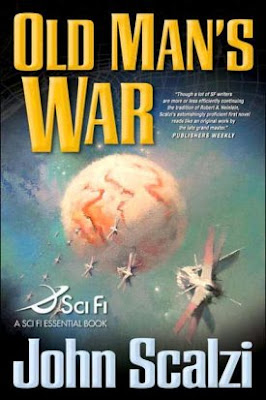 Here at Iceberg Ink we like to do things a little differently.

Rather than start reviewing a series at the beginning, we like to start at the end and MOVE BACKWARD.

OLD MAN’S WAR (OMW), by John Scalzi, tells the story of John Perry a former ad copy writer who decides to leave earth on his 75th birthday and join Colonial Defence Forces (CDF). He figures that, after his wife’s death, there is nothing on Earth worth sticking around for.

In exchange for two years of active service Perry will be given back his youth and allowed to settle a new homestead on an alien planet at the end of his tour.

Only things don’t quite work out that way. Perry is expected to serve a full ten years in the CDF and instead of getting back his youth he finds his conscious transferred into a heavily augmented clone of himself.

This new body is green in colour, highly resistant to damage, comes with a built in computer, cheerfully called Asshole, and, most importantly, is closer in age to 25 than it is to 75.

Perry learns that humanity is in a dog fight with nearly every alien species in the universe for precious resources and that rather than serve a cushy term in the military in all likelihood he’ll be forced to lay down his life instead.

Slowly, Perry becomes accustomed to the new status quo. In boot camp he makes an impression on his drill sergeant and finds himself as squad leader.

When his training is over Perry is shipped out to begin his tour of duty. He takes part in a number of battles with a variety of different alien species. His luck runs out however when his drop ship is shot down during a rescue mission. Left for dead by the enemy he is rescued by the Ghost Brigade, a secretive branch of the military made up of clones of potential recruits who decided against joining up with the CDF.

Perry is shocked to find that one of the Ghost Brigades soldiers is his dead wife, who has no recollection of their time together but feels a connection to him nonetheless. He manages to attach himself temporarily to the Brigade in order to be close to his wife’s clone, but with a pitched battle coming up anything could happen.

It’s easy to make comparisons between OLD MAN’S WAR and Robert Heinlein’s classic STARSHIP TROOPERS. The two books share a similar overall plot structure and touch on many of the same issues. However, while TROOPERS was a thinly disguised essay from Heinlein about the nature of the military and the importance of civic engagement, WAR’s political and social posturing is much more muted in presentation and serves more as a tonal backdrop rather than as a specific plot element.

While Scalzi is a capable and compelling writer I unfortunately found the bulk of his characters to be underdeveloped and his central plot to be almost an afterthought.

The bulk of OMW is clearly more of an exercise in world building than it is in crafting a driving narrative. Three quarters of the story are devoted to exploring the makeup of the OMW universe, but aside from creating an attention grabbing back drop very little of it matters to story. But, to his credit, Scalzi’s world building is interesting enough, in and of itself, that you’re mostly willing to give him a pass on his plot-lite.

Many of Scalzi’s central characters don’t fare very well. Perry is mostly a blank slate, he drifts from setup to setup, ostensibly so the author can show off his world building prowess. Perry’s morality and personality are also highly flexible, shucking off his pacifism almost instantly and taking to the life of a soldier with seemingly few reservations.

I’d liked to have witnessed more character exploration throughout the book. The book’s central premise, Earth’s senior citizenry goes to the stars to fight for humanity because their age and experience are an invaluable asset, is essentially junked from the get go. Their accrued wisdom is forgotten as the characters are turned into indistinguishable jarheads with no connection to their former lives.

Essentially, the stakes in OMW are too low. The characters are mindless ciphers who are there to simply follow orders and they fail to add meaningful context and relevancy to the horrors they witness.

The value of war books, especially sci-fi based war books, is not that they give the reader new and unorthodox way to violently dispatch characters. Rather, they provide the backdrop needed for intense character introspections. Scalzi pays lip service to the question ‘Why do we fight?’ (Psst, its because we have too). But he fails to ask the larger, meatier brain bogglers about the nature of war that are a crucial staple of these sort of stories.

For a book that purports to delve into the subject of the changing definition of what it means to be human, hardly any attention is paid to exploring the human condition.

I deeply dislike the practice of using the first book in a trilogy as an opportunity to set up developments in future stories at the expense of its own narrative cohesiveness. I caught Brandon Sanderson at it in MISTBORN and, without yet having read subsequent novels in this series, I suspect John Scalzi is doing the same thing here.

A book should be good enough to stand on its own, not gain in value only when paired and analyzed with later entries in the series. OMW spends too much time world building and the end result robs the book of its narrative momentum.

This is an enjoyable read in spite of the time exploring its overly detailed universe and bland characters, not because of them.
Posted by Chris at 9:44 AM