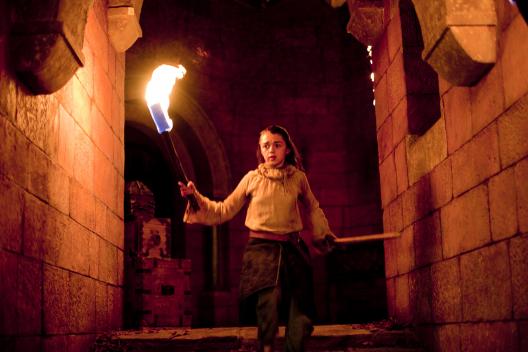 “What do we say to the god of death?” ~Syrio Forel


“Not today.” ~Arya Stark
What is there to say about the 8th episode of HBO’s GAME OF THRONES titled THE POINTY END? Wow, where to start. This episode is amazing top to bottom. I suppose it helps that this one was written by the author himself George R. R. Martin who knows what to put in and what to leave out. Except it seemed like he covered an excessive amount of ground in this one!
Let’s begin with what we got to see.
-Syrio Forel’s defense of Arya and fight against the Lannister guardsmen, and his “last stand” against the nasty Ser Meryn Trant.
-Arya’s escape from Kings Landing after grabbing Needle and running a dirty stable boy through.
-Robb calls the Stark Bannermen with the intent on marching south, cutting through Jaime Lannister’s host in the hpes to reach Kings Landing and freeing his father.
-Catelyn, having lost Tyrion, received a letter from Sansa who says to come south and bend the knee to Joffrey, and her insane sister Lysa Arryn who won’t budge troops from the Eyrie, heads north instead to meet up with Robb on his way south.
-GreyWind (Robb’s Direwolf) takes two of GreatJon Umber’s fingers and he LAUGHS IT OFF!
-Varys visits Ned in the dungeon twice and talks to him about various things.
-Sansa is convinced by Cersei to write to Robb and ask him to come to Kings Landing and bend the knee to Joffrey.
-Tyrion and Bronn meet the men from the mountain clans, Shagga son of Dolf, Timmett son of Timmett, and Chella (ugly as sin Chella), brings them to his fathers host, where Tywin says if they fight for him they will get everything they desire and more.
-At the Wall two dead Ranger’s who died north of the Wall are brought into Castle Black for eventual burial.
-Jon Snow, while having been confined to his quarters by the Lord Commander for attacking drill sergeant Alliser Thorne, ends up on the receiving end of an attack by one of the dead Ranger’s who has risen zombie-like with blue eyes intent on killing the Lord Commander and Jon. Jon draws his sword but the blade has no effect, so instead he grabs a lantern burns the cursed thing.
-Daenerys going against Dothraki custom tells the Khal’s horde that they can no longer rape women of the enemy after a victory. The Khal backs her up and ends up in a fight with a raider who he quickly dispatched and takes a wound on the chest.
-Lastly, King Joffrey tells commander of the Kingsguard Ser Barristan Selmy that he is to retire (for not having defended his father well enough) and Barristan begrudgingly does so but not till after he’s pulled his steel and told the rest of the men that he could cut through them like cake. After that Sansa comes forward and pleads that Joffrey show mercy to her father, to which he agrees provided Ned bend the knee and proclaim him the rightful king.
Phew. That is A LOT for one episode, and I don’t know about you but for me it literally FLEW by. Everything fit here. There were no jarring moments or anything to take me out of the narrative. In fact the flow of how the scenes happened was quite deftly handled.
The acting of course was once again pretty much amazing across the board. I think this episode let’s Syrio Forel (Miltos Yorelemou) really shine. I mean this is one of his best scenes in the book and Yorelemou plays it absolutely gracefully. Loved every drop of that scene and since it was one of my top five scenes in the book it certainly is here as well. I also think that Richard Madden who plays Robb Stark really got to shine here as he totally takes command of the Banners and proves that he can lead them. Newcomer to the show Clive Mantel who plays The GreatJon Umber absolutely nails the role as to how I saw him in the books. Lastly I once again am mesmerized by Charles Dance (Tywin Lannister) as he brings such a depth of evil mastery to the role, even when he is one upped by scene-stealer Jerome Flynn (Bronn) “You wouldn’t know it.”.
All in all, it really was an amazingly progressive episode and the pieces are fast moving into place for the last two episodes of the season, and the culmination of the story from the first book. What more can I say? Everything in this episode was great. The acting, the dialogue, the sets, the tension. I have zero complaints in fact.
Oh and if you didn’t melt with emotion when Arya was running down the stairs with her wooden sword repeating “Not today. Not today. Not today.” As she had to leave Syrio to his fate, then you are cold and dead inside.
I think it’s going to be really great to get to see the battle of Whispering Wood in the next episode, and some of the other things that transpire of course.  I think the main thing I will have to worry about now is that I know how the 1st book ends and I KNOW my gf is going to really want to know what happens next, but she’ll have to wait till 2012 to find out…unless I can convince her to read the second book.
Posted by GunMetalBlue at 6:12 AM

Email ThisBlogThis!Share to TwitterShare to FacebookShare to Pinterest
Labels: A Game Of Thrones, book review, The Pointy End, tv