Malazan Re-Read: Dust Of Dreams (In Prep For The Crippled God) 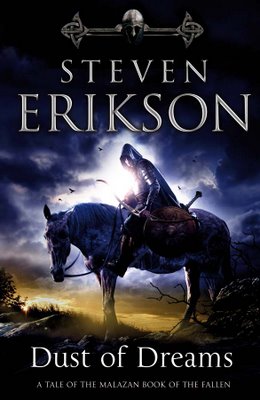 At some point after I initially caught up with Erikson's Malazan series back in the day...I believe volume 5 MIDNIGHT TIDES had just been released when I started the series...I began to read them quite fast as the new ones came out. I remember concentrating really hard on taking my time with THE BONEHUNTERS, but all bets were off once REAPERS GALE dropped.

The rushing produced a two-pronged effect. One, I got the gist of the whole book even though I might have missed some subtle (and some not so subtle) nuances of the books. Two, it makes for a prime choice to re-read as the next book comes out so you can pick up the stuff you miss. I have always professed to friends or acquaintances who are about to embark on the series that one of it's most incredible features is repeat read enjoyment. I truly don't think there is another series that I can honestly say reveals little bits and pieces and stuff I missed upon 3rd or even 4th re-reads. The read just gets richer and deeper every time.

THE CRIPPLED GOD, tenth and final novel in the main Malazan series, is due to drop end of February, and with that little taste we got from TOR the other day I got to jonesing for the new book. What better way to jones? With my first re-read of the ninth volume DUST OF DREAMS.

This blog started long after I read DoD so I plan to actually throw up a review once I finish. This should also serve as a note to the reviews over the next few days, cause these books are over a thousand pages a piece, so you won't see a new review till early next week from me. After that I have Joe Abercrombie's THE HEROES on deck and a few other publisher-sent review copies to get to.

For all the Malazan fans: Are you doing a re-read in preparation too?

Also, how awesome is it that the Malazan series is going to be the FIRST completed Epic fantasy series that clocks in at ten books. Erikson wins!
Posted by GunMetalBlue at 11:21 AM