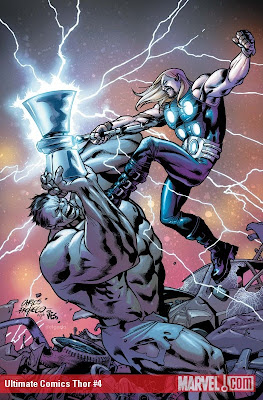 The story of Ultimate Thor finally catches up to where THE ULTIMATES kicked off nearly ten year ago. While Thor is finally coming to terms with his new mortal status quo his misguided brother Loki is quietly escaping from the room Odin imprisoned in for betraying Asgard. This issue primarily deals with how Thor transitioned from a fallen Norse God, to a crusading environmentalist and then finally a reluctant superhero.

Filling in perceived holes in a character’s backstory is a time honoured tradition in comic bookery. These ‘untold tales’, when done right, can help shine a new light on a character or reframe their actions in a different perspective. But unfortunately, all too often, these fill-ins are unnecessary, contradict previously established events and confuse rather than enlighten. Most continuity add ons feel like they’re forcibly grafted onto the established narrative, with no consideration given to how the new material works given the overall makeup of the character.

With this issue Jonathan Hickman has elevated this overused plot device to an art form. It’s just so fucking elegant. Hickman’s tale adds depth and nuance to Thor’s history rather than simply riding the coattails of what has been written before. He respects the aims and intentions of the writers like Mark Millar who have worked on the material before him, but doesn’t paint himself into a corner by worshipping it. There’s not a lot of continuity with U-Thor so its not as if Hickman has to worry about stepping on anybody’s toes. But Thor’s backstory was a key plot point in THE ULTIMATES 2 and a lot of what Hickman is doing here is helping to set up that story while at the same time crafting a self contained tale that is interesting and compelling in its own right.

You know, I think if I read some more of Hickman’s work I could be persuaded to check out what’s happening at Marvel. I’m impressed with the quality and care that goes into his writing. Rather than simply trying to slap a Geoff Johnsian continuity patch on an established story Hickman has gone and found a natural way to expand and expound on a relatively two dimensional character. This isn’t penciller Carlos Pacheco’s greatest work, some of the pencils seem a little rushed. There’s a splash page at the end where Thor looks downright lumpy. But I’m willing to concede that might be because of the three different inkers who had a hand in putting out this book. If you were ever a fan of the early Ultimate Universe I’d highly recommend picking up this series. You won’t be sorry you did.

You’ve heard the term batshit insane before right? Well, they were talking about this comic when that term was invented.

Batman and a Deadman possessed Joker search Arkham Asylum for clues behind the mysterious string of events that have terrorized Gotham City.

And that’s about as much as you’ll ever really figure out about what’s going on in this series. While the continuity and structure of the art has improved in this issue the overall look feels much more rushed and messier than in previous entries. The writing is better, but only marginally so. Dialogue balloons still threaten to crowd out the art. In some scenes there are several characters talking simultaneously and it becomes difficult to follow the thread of any conversation. It’s annoying and adds nothing to the reading experience. Unless the goal was to keep taking me out of the story, then mission accomplished.

But what really drives me nuts in this book is Adams preoccupation with writing dialogue as realistically as possible. This means that characters are frequently reduced to speaking in nonsensical sentence fragments, will lurch into unnecessary asides and have an ugly tendency to narrate the scenes for readers. Just because people talk that way in real life doesn’t mean it should be transferred wholesale to comic books. Its an impediment to readers, who are forced to spend a lot of their time working out just what’s happening onscreen.

I think the best thing for this title would be a firmer presence by editorial, cutting out all the author’s entitled words and better honing the story he seems to be trying to tell.

The time in this issue is split between the Deadman and Aquaman’s story lines. After seemingly murdering Hawkman and Hawkwoman last issue, under the control of the white power ring, Deadman demands answers for what has happened. The ring explains that the Hawks had completed the mission for which they had been resurrected in BLACKEST NIGHT and that their pure energy was needed in order to combat a dark avatar that was due to arise and threaten the world. Meanwhile Aquaman and Aqualad are en route to the Bermuda Triangle in order to stop an offshoot of the ancient Atlantean race from attacking the surface world. Which is just about when the Atlanteans decide to meet them halfway and fight it out on their terms instead.

You know, I’ve always looked at BLACKEST NIGHT and BRIGHTEST DAY as another Geoff Johns attempt to impose his ideal version of DC’s legacy characters onto the DCU. Kendra Saunders as Hawkgirl not working the way you want? Time to kill her off and resurrect Shiera Carter instead. Aquaman’s bloated continuity and constant character reboots getting a little much? Then bring back the good ol’ reliable Silver Age edition and we can try to forget 30 years of publishing history.

But honestly, after the last two issues of BRIGHTEST DAY, I can say that I don’t have the foggiest idea where they’re going with this. After wiping away the Hawks last issue and then giving a nod to one of Aquaman’s handier moments in this one I have to admit I’m a little curious to see what they’ve got in store. I thought that BLACKEST NIGHT established the version of Aquaman that Johns wanted to use and now I’m not so sure. Granted with resurrection white power ring sitting in their back pockets Johns and Tomasi can pull a dues ex machina, at any moment, to undo any character changes they’ve made in this series. But I believe that these writers are cannier than that and would give us something new before they fell back on the same old tricks.

One beef, first we had the Sinestro Corps Wars, then the War of the Supermen, now we’ve got Aquawar and soon we’re going to see the War of the Green Lanterns. It’s time for a new mini event term. Please and thank you.

P.S. The art was great in this issue, Ivan Reiss in particular had some beautiful splash pages.

This was (surprisingly) a really good read.

The New Ultimates struggle to take down Thor after the God of Thunder is goaded into a murderous rage by Loki’s behind the scenes machinations.

I’ll admit. I don’t have a lot of love for Jeph Loeb lately. After seeing his work on THE ULTIMATES 3 and ULTIMATIUM it was clear that he wasn’t able to grasp the basic premise behind the Ultimate Universe.

The UU is about reducing Marvel 616 characters to their core qualities and cutting them free of the shackles of continuity. It isn’t about throwing whatever ’What If...’ crap against the wall and hoping something sticks. Nor is it about twisting characters beyond the reader’s ability to recognize them.

But the Ultimate Universe is also a trap. When the line was first launched fans enjoyed seeing Ultimized\Elseworlds versions of their favourite characters. It was only natural that creators would pick up on this desire and give the fans what they want. Which is more recognizable characters, and increasingly storylines, told in a stripped down reader friendly fashion.

Unfortunately that means that writers are always attempting way to reinterpret old characters and rethink classic storylines. The end result is that the Ultimate Universe tends to fall flat on its face when it attempts to stand on its own legs, put the constant reinvention process and tell its own stories. Witness the stagnation of the ongoing ULTIMATE FANTASTIC FOUR and ULTIMATE X-MEN titles. Fans got tired of the Ultimized character of the month and neither series was able to transition into a successful ongoing without it. (ULTIMATE SPIDER-MAN being an obvious exception to this rule)

In a way the Ultimate Universe is a perpetual event comic book. Because if it can’t successfully tell fresh, new ongoing stories or continually Ultimize old characters than the only way to keep reader interest is to keep constantly reupping the dramatic stakes. Which is what led Loeb down the road to ULTIMATUM the first time.

In this series his goals are much more straightforward. Tell a simple story, raise the dramatic tension, don’t fuck with everything too much and explore the depths of these still (relatively) untapped characters. Loeb treading water and gently poking around is much more interesting, and less dangerous, then when he’s trying to put his personal creative stamp on things. While he might lack Millar’s ability to hone in on the inherent uniqueness of the Ultimate Universe he can still tell a perfectly good story when he reigns in the crazy a little. Of course, it’s not hard to hit something out of the park when you’ve got Frank Cho rocking the pencils.