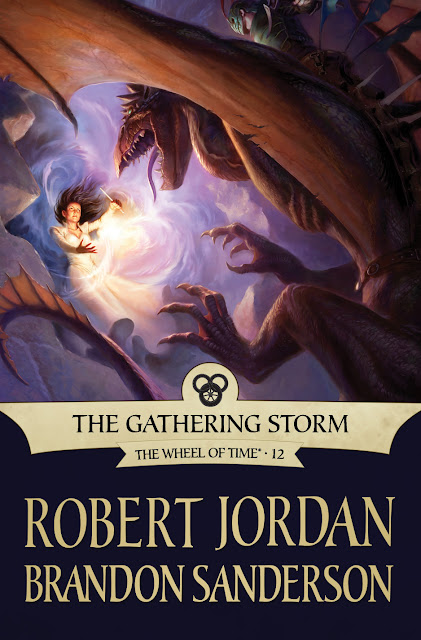 THE GATHERING STORM is the first book in the Wheel Of Time series since the 5th book THE FIRES OF HEAVEN to really knock me over. I have liked the volumes in between, mostly (see TPOD and COT as ones I didn’t), but none of those really had the impact the first few, and now the 12th have had on me.
The main benefit here is one of plot threads tying up. So many of the main plotlines that have been running through books 6-11 are wrapped up, or abandoned for useless in TGS that I nearly clapped every time one did that. Basically this novel is a cleaning of the house for the series. Sweep the front walk clean of debris so that the soldiers have no obstacles when they head off to war.
Beyond that, this book kicks the action into high gear, and everything you have come to love about the series flies right to the forefront. Certain characters go from being awesome to being flat out amazing. Egwene, for example, finishes the transformation she began way back when she was raised as the rebel Aes Sedai’s Amyrlin. By novels end she becomes something of a legend, and her chapters and scenes in the last 200 pages are likely to be remembered as some of the most stunning of the series. Rand spend most of the book kind of annoying me, as he not only hasn’t changed in books and books from being a jerk, but he also gets even worse here. However, this character progression is also one that ties up/comes to a head and Rand’s plotline FINALLY makes sense to me so in the end I can’t complain, but I am actually excited to see what Rand can do now! Cadsuane is another character that goes through a series of chapters where I can’t stand her, but her progression is one that has a point too. The Aes Sedai in general get paintyed better here methinks. Not as many pepper the scenes and for the most part they are much easier to read IMHO. Verin Sedai’s plot thread here is probably one of the most impressive in the book aside from Egwene and Rand. The aftermath of Semirhage’s capture is dealt with for a number of chapters and finished in a way that I wasn’t expecting at all. The deal with Siunae and Bryne is finally tackled and comes to bear fruit we’ve been waiting books for. Perrin and Mat are only in the book for a chapter or three each…but I’ve heard tell their stories get dealt with in TOWERS OF MIDNIGHT which I have to assume will bring everyone up to date for the final volume if I am not mistaken. Basically though, this book belongs to Rand and Egwene, and aptly so as I don’t think all the characters could have been done this sort of justice in one book, so good on the powers that be for splitting it with ToM.
So, plot points tie up and some in such satisfying ways that I can’t even explain their awesomeness. It’s hard to sing the praises of this book without spoiling too much for anyone who hasn’t read it. Sufficed to say Sanderson really does begin the rescue of this series from the chasm of plodding boredom that it started to descend into. The writing is succinct, enjoyable and the pace moves along at a great clip. In fact, I don’t think that at any point I had to slog. Most chapters had a point to the overall arc, and if they didn’t then they moved along fast enough to not have to worry to much. Is it overlong? A tad maybe, but I honestly can’t really see much of what could be removed. I think the only part that I felt lacked some purpose was Rand’s attempt to save the folk of Arad Doman from the Seanchan AND themselves. In the long run it really only served to deal with one of the Forsaken, and add to the tension that Rand’s personality really begins to alienate his friends and the people around him.
The action sequence at the end of the book is, for lack of a better word, glorious. Honestly, if I was there and witnessed it, that is how I would describe it. It is a pull-no-punches, head smacking, saidar-wielding, Raken blasting night of chaos. Which is then followed by a set piece involving Egwene and a bridge into Tar Valon that was, for me at least, one of the most beautifully descriptive passages in the series evoking quite stunning imagery.
The final chapter (before the epilogue) made everything I’ve endured as to a certain story thread up until this point worthwhile. It is quiet, telling, and deftly handled by Sanderson.
THE GATHERING STORM is worth the wait, and is the book I think a fair number of WHEEL OF TIME fans were waiting for. I don’t want to say it is perfect, but like I said above I enjoyed this book on level with the first few books in the series and my state of wonder and enjoyment with this series is rekindled with it.
Bring on TOWERS OF MIDNIGHT…and Scott will finally be caught up with everyone else.
Posted by GunMetalBlue at 11:53 AM