Book Review: Tome Of The Undergates by Sam Sykes 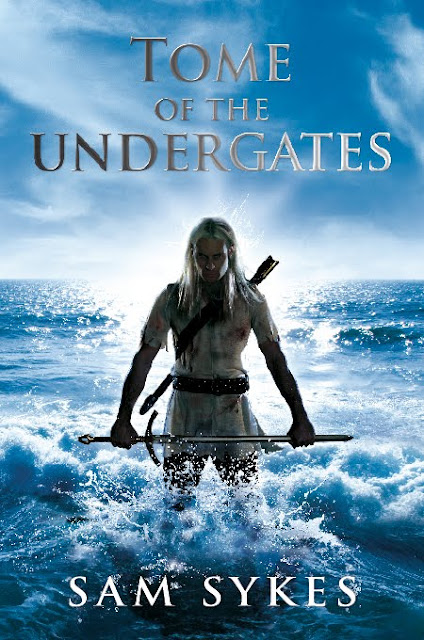 Lenk can barely keep control of his mismatched adventurer band at the best of times (Gariath the dragon man sees humans as little more than prey, Kataria the Shict despises most humans, and the humans in the band are little better). When they're not insulting each other's religions they're arguing about pay and conditions. So when the ship they are travelling on is attacked by pirates things don't go very well. They go a whole lot worse when an invincible demon joins the fray. The demon steals the Tome of the Undergates - a manuscript that contains all you need to open the undergates. And whichever god you believe in you don't want the undergates open. On the other side are countless more invincible demons, the manifestation of all the evil of the gods, and they want out. Full of razor-sharp wit, characters who leap off the page (and into trouble) and plunging the reader into a vivid world of adventure this is a fantasy that kicks off a series that could dominate the second decade of the century.
Have you ever gone to a party, and at that party is a guy who seems to be the very life of that party. This guy yells funny things, makes people laugh, kisses the girls and shoulder squeezes the guys. Later on in the night this guy will inevitably have everyone’s attention as he tells one bawdy story or another, the punch line of which is a laugh riot at the same time as it is disgusting. This guy is forgotten once you leave the party and head back to your normal lives…but he’s there again at the very next party, doing all the things you wouldn’t, being crass, drunk, fun and flat out ridiculous…and telling stories that you’ll remember.
This guy is new author Sam Sykes, and that story is PYR books TOME OF THE UNDERGATES.
Is this a glowing review, or a scandalous scathing one? Only you can tell. Read on good friend, read on…
Sam Sykes first book, is probably one of the most interesting I have read in a while. A lot of folks have mentioned the 200-ish page battle that starts the book. I actually wouldn’t call it that. To me it is three separate acts of sea battle, or at least that’s how it came across. Sea battle with pirates, sea battle with pirates and frogmen, and finally sea battle boss fight.  This works, sort of. In theory it’s a nice way to slice up that first section in to three, while introducing us to the main characters. The only issue that arose for me was that those pirates get a bit tiresome. The frogmen and the boss fight add a nicely twisted edge to those fights, but there is still pirates. So it’s like if the Jedi in the Star Wars prequels fought battle droids for 160 pages. Yes it is cool when they get cut down, but yeah after a while it gets kind of repetitive. Still, the 3 act battle sequence IS indeed a feat of writing and should be noted as such. I enjoyed it as an intro to the main characters, and quite frankly it was a perfect way to introduce us to six protagonists who pretty much hate each other.
The plot doesn’t scoot forward an awful lot in that first half, but it is clearly meant to be character driven so that was okay by me. That said, as mentioned by a few other folks, the nearly constant nasty banter back and forth starts out amusing, but after a while really does grate on the nerves a bit.

Lenk kind of sums up his leadership of these adventurers in one sentence early on. It is one where the Captain of the first ship they are on says that he is the worst of the lot of them…and he says that’s why he’s their leader. That kind of sums up the rest of the band too. This really is a casting call for a D&D raid. A warrior with a cool sword, Elvish-like cat chick archer, young wizard, altruistic priestess healer, cowardly rogue, and species-hating dragonman. That, however, is where the D&D comparison ends. This is D&D if you played it with a bunch of frat boys who spend the night getting steadily more and more drunk and belligerent. That’s actually a compliment, for where this book could have easily slipped into the tropes of every day D&D quest style sword and sorcery, it doesn’t. In fact it rails against those tropes hard. Yes they are on the hunt to kill demons, and obtain the Tome of the title, but the journey there is much different than you’d expect.
That said, the characters dislike of one another does begin to rub and wear after a while. It starts out funny, and then as time goes on you start to think they ought to start trusting one another more and start looking to each other for help, but instead they all just mostly continue to hate each other. Add the fact that Lenk clearly lusts after Kataria and you get kind of a mish-mashed strange abstract love (that seems ill placed in amongst the hate), one in which Lenk can’t really talk to Kataria. So instead he talks about how she farts when she sleeps. Oh bravo Lenk. His inner voice is a lot more scathing to him when it comes to his ineptness concerning Kataria.
As for the plot, it is pretty simple after the sea battle...The demon stole the Tome (with it can open the Undergates and unleash bad stuff) and itself seemingly spells their deaths to go up against, but if they abandon the quest to get the Tome back...they die anyways. So they have to push on, and the characters all seem to hate the idea of it...and have no trouble mentioning it. Simple in plan, more difficult in execution, but that's what makes the story worth your time.
If Kevin Smith wrote a fantasy book it might be like this. Sykes is first and foremost a humorist to me. He is funny as hell. The humor in the book is almost always firing on all cylinders, and will certainly entertain. The man’s twitter feed and blog are one-stop comedy shops, and never fail to make me howl.
What really stands out here is this. Is Sykes first book great? No. Is it good. Hell yeah it’s good. The prose is ridiculously easy to get into and flows with a clip and pace that will find you rolling through the pages. I think the only issue here is that there is a repetitiveness that can be very jarring. Both in the characters interaction with one another (all that repetitive nastiness)and with some scenes and ideas. The voice in Lenk’s head for example…there are only so many times it need be mentioned methinks and it goes over that line. The characters, I feel, need to eventually trust one another and stop their bickering…and that doesn’t really happen in this volume. That said, It is the glimmers here of greatness that will keep you reading, and what will certainly make you want to read the upcoming sequel BLACK HALO. They only shine through occasionally and I can totally see Sykes coming up to be a frontrunner of the sub-genre with dirty, grimy, no-holds-barred, take-no-prisoner adventures like TOME OF THE UNDERGATES. I simply think that it may take a book or two more to get there and hone that craft into something super-awesome.
That said, this book is an easy and fun read, that will entertain you if you let it. Make no mistake though it is gritty, slimy, nasty and as dank as it gets for this kind of sword and sorcery book. Not really for the faint-hearted. I fall into the middling camp. I liked it a fair deal, but there are enough little bothersome things to prevent me from loving it. That said, I really look forward to the sequel and see where Sykes awesomely twisted mind takes us next.
Posted by GunMetalBlue at 7:07 AM