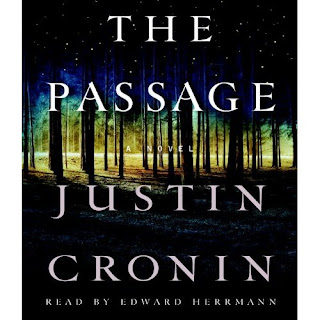 If vampires really exist, why haven’t they taken over the world? It’s a burning question that has plagued the world’s greatest thinkers since time immemorial.

In THE PASSAGE by Justin Cronin the author attempts to answer this brain teaser, pulling back the curtains on a post apocalyptic world where semi-feral vampires, known as virals, have all but obliterated mankind.

The story begins in the not so distant future. The United States military is experimenting with a virus that gives its host a number of amazing special abilities. Due to the inhuman nature of the experiments the military is using death row convicts as guinea pigs for the treatments. The treatments transform the convicts into iridescent bat creatures with an unquenchable thirst for blood.

Amongst this butchery moves Brad Wolgast, a dour FBI Agent whose job is to convince the death row inmates to participate in the military’s program. Brad’s neatly ordered life begins to unravel when he is ordered to transport a young homeless girl, Amy, from a nunnery to the laboratory where she is to become the latest test subject. Brad’s conscience gets the better of him and when the viral’s break free from their captivity he uses the chaos to rescue Amy from the lab. Together they hide out in the mountains in a deserted campground as the virals begin to prey on a seemingly powerless humanity.

Fast forward nearly a hundred years later and humanity has all been wiped from the earth. In a small Californian town called the Colony a decaying community clings to the delusion that the Army will come to rescue them from the nearly nightly viral attacks. The only thing that keeps the vampires from overrunning the town is a series of giant lights that ring the Colony’s perimeter and keeps the virals at bay.

Peter is a young soldier of the Watch, a milita that patrols the wall of the town, always on alert for viral attacks. During a daytime sortie in search of spare parts for their power grid Peter’s squad is attacked by virals and only the timely rescue of a seemingly ageless Amy saves him from being eviscerated. When Amy shows up at the Colony a short time later it sets off a chain reaction that sends the town hurtling towards its own destruction. In desperation Peter, Amy and a small group of liked minded folk flee in search of a solution to the viral menace.

This was a good book that had greatness in its grasp but ultimately fails to capitalize on its untapped potential.

Justin Cronin’s work bears some remarkable similarities to genre uber-author Stephen King. In fact, THE PASSAGE could be seen as riffing off King’s seminal work THE STAND. But while Cronin might utilize some of King’s more recognizable literary tics he is unable to penetrate much beyond the surface narrative he is telling and delve into the deeper thematic core of his work.

And its a shame too. The first third of the book is set up so promisingly. Cronin expends an enormous amount of time and energy crafting a compelling backdrop and developing interesting characters. Then he just pisses them all away in an apocalyptic fury and wipes the slate clean so he can get on with moving the story forward. The reader gets so caught up in the beginning of the story that the abrupt change of locale and characters almost feels like a betrayal; all that wasted time and energy on the reader’s part on a premise set up that probably could have been tossed off in wordy prologue.

THE PASSAGE’s most notable weakness is that it reads like an elaborate treatment of a screen play, alternating between fixed set pieces and grim and gritty action scenes. Promising characters are revealed in the end to be stock stereotypes and the only real conflict in the book is the kind best dispatched with the flash of a blade or a cocked gun. No one pauses to ask why or examine their own motivations because summer blockbuster characters don’t have time for self reflection.

All sizzle, no steak.

I’m probably coming off a lot harder on this book than I mean too. But that’s mostly because I can see the really great story hiding behind the botox and butt implants that have been grafted on to it. At the very least THE PASSAGE avoids the fragmented storytelling that destroyed WORLD WAR Z for me, another genre story dealing with b-movie monster world domination, by keeping with a solitary narrative plotline.

THE PASSAGE is a good book and an interesting genre read. I was never bored or disinterested. I just found the final story to be safe and somewhat predictable. Cronin spent so much time moving the character pieces and keeping them true to their surface motivations that he forgot to sit down and spend some time really mucking around and examining their literary souls.