If you haven't read Jim C. Hines' fairytale series about Cinderella, Snow White and Sleeping Beauty being involved in a Charlie's Angels-style ass-kicking team, then I can't help you. Except to say you SHOULD read them. I've read the first two (THE STEPSISTER SCHEME, and THE MERMAID'S MADNESS) and both are fun, adventurous romps and deserve a look. Hines has an easy prose and a style that can't help but be loved. His characters are fleshed out well, and his plotlines don't always go how you expect them to. It's quite a refreshing little series of light fantasy fare. I also have the third book (RED HOOD'S REVENGE) in my To-Read pile, and look forward to the release later this year of the fourth book called THE SNOW QUEEN'S SHADOW which you can pre-order at the link and comes out July 11, 2011.

At any rate, I found the German cover art for the 3rd book...and it's kind of better than the US cover. I like a fair amount of German covers to books. I mean, the German covers of Butcher's Codex Alera series are just simply gorgeous! Here, we have another cover that I think does a really good job. The first two German covers for the series are unfortunately less inspiring, and don't reflect the series tone. They hired another artist to do the third and I think it captures the fun better with a more comic-book-y style. Have a gander for yourself. I think my only issue is that the only character who would overdo the cleavage like this is Snow, and I certainly don't think Red would be so...um...enticing. I mean, the frilly edged red stockings, on an assassin? Yikes.
Beyond that, I feel the tone is MUCH better here than in the US cover. It paints a better picture of our intrepid princesses...princessai?...no, princesses. The font is playful, and the wing design behind the title is nice as well.
The US cover for the first book was "portrait-eqsue" as you can see from the amazon link above, and the second, while looking similar to the first, distinguished itself by having the ship in the shot and the girls were in different poses. Personally, I feel that the third US cover goes back to the first cover style with the "portrait-esque" cover again, and I think...we've done this already. Not to mention it gives a bit of the wrong impression for the books as they look like Maxim Covers where the girls are deliberately posing like models (when in the books they are a little more badass than that)...and I feel the German cover at least tries to set the scene instead.  See the US cover below: 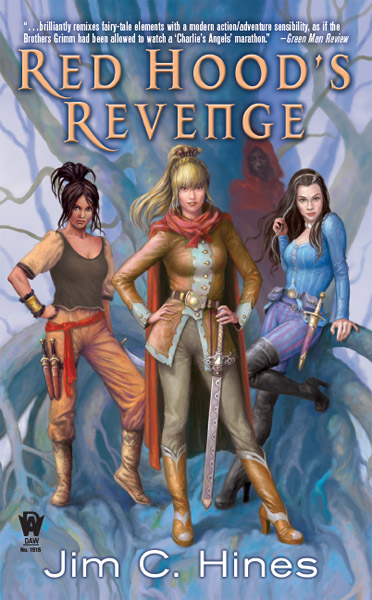 That said, I feel Snow is the best represented on the US covers cause her magic mirrored choker is always showing, as are her snowflake earrings and sometimes her throwing stars, whereas on the German covers you can only tell it is her because Talia looks angrier than her.
So, I feel that the German cover, with a bit of tweaking could be the superior of the two...but as it stands I can only support parts of both. Tone down the cleavage a bit (on everyone except Snow, cause she's straight up sexy in the books) but use the tonal value and delineate the characters VIA their clothing more and I think it would be perfect.
Anyways, like I said above. Check out the series for fun, and light fantasy fare that are short quick reads.
Posted by GunMetalBlue at 6:57 AM