Review: DOCTOR WHO - A Christmas Carol 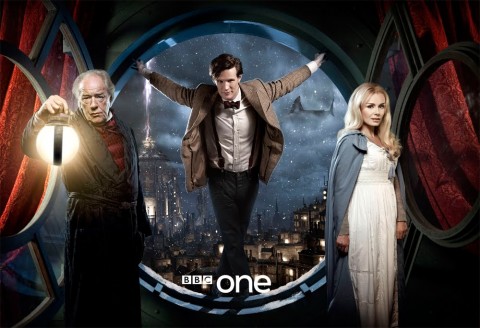 I don’t think I can recall a time where DOCTOR WHO showrunner, writer extraordinaire, and all around nice guy Steven Moffat has let me down. After watching his first written Christmas Ep. Of DW I am happy to report that track record is not only clean, but also gleaming.

While I love a lot of episodes from Russell T. Davies-Era WHO, there are still some stinkers in there and most especially I will complain that his Christmas specials were never very Christmassy. They took place at Christmas, but never really INVOLVED Christmas all that much.

Moffat decided to put the tinsel back into DOCTOR WHO Christmas. This years entry, aptly titled A CHRISTMAS CAROL fires on all pistons from the very get-go.
A swanky looking passenger starship (with a bridge like the new Star Trek, bright white outfits, fancy gadgets and all the lens flare you can handle) is heading through the atmosphere of a cloudy planet and crashing. Luckily intrepid companions of the Doctor (and newly married honeymooners) Amy & Rory are aboard and call for the Doctor’s help. Thus begins a romp that includes a miserly old scrooge character (willing to let the 4000 people aboard that ship die), a beautiful , flash frozen opera singer who is essentially collateral against debts, flying mist-swimming fish and the Doctor trying to sort it all out.

This episode has everything I have come to expect from the Moffat/Matt Smith-era of DW. Clever dialogue (not just the Doctor’s, but everyone else as well), wonderful sets and special effects, but most of all an endearing story that never feels tacky or over-the-top. Christmas is everywhere in this episode and so is time travel. It’s nice to see that Moffat is still using a lot of time travel in his series, which is something I always found lacking in Davies-Era WHO. You have a guy with a time machine, so USE him. Moffat always does, and makes especially unique use of him here dropping back and forth through the scrooge characters’ (Kazran Sardick) past behaving like a ghost of Christmas past of sorts.

This is pretty much what I have come to expect from the Moffat/Wenger camp. A Solid, well-scripted and directed WHO entry with the proper amounts of wit, charm and clever time-twisting.

If you haven’t seen it, do yourself a favour and give it a watch. Your time won’t be wasted folks!

I honestly can’t think of anything about it that I disliked, and it gets me very excited for the new 6th Series that will come our way this spring. Which apparently includes the infamous, as yet unknown, first time River Song meets the Doctor. If you watch the Coming Soon Trailer below, you will also see a slightly different version of the console in the alien ship in last years Ep. THE LODGER, the Doctor in a Stetson (Stetson’s are cool), and in what looks like a presidential office ordering jammy dodgers and a fez, bearded and possibly imprisoned and even an Ood!

Very exciting things appear to be on the horizon.
Posted by GunMetalBlue at 6:33 AM