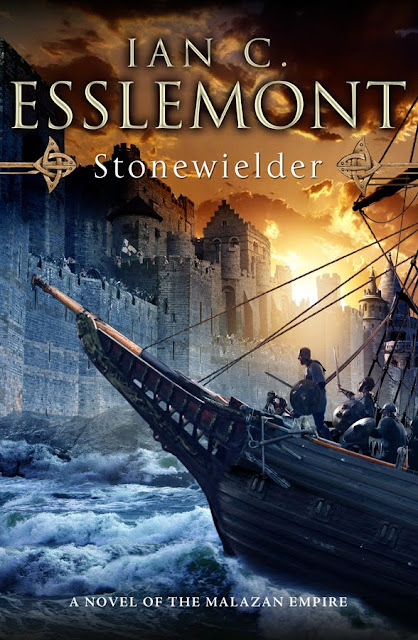 Greymane believed he'd outrun his past. He now ran a school for swordsmanship in Falar and was looking forward to becoming fat and lazy. With him was Kyle, though the plains youth was not quite so contented with civilian life outside the mercenary company the Crimson Guard. Yet it is not so easy to disappear when you are an ex-Fist of the Malazan Empire, especially one denounced and under a death-sentence from that very Empire.

For there is a new Emperor on the throne of Malaz, and his thoughts turn to the lingering drain of blood and treasure that is the failed invasion of the Korel subcontinent. In the record vaults beneath Unta, the Imperial capital, lie the answers to that disaster. And out of this buried history surfaces the name Stonewielder.

In Korel, Lord Protector Hiam, commander of the Stormguard, faces the potential annihilation of all that he loves as with the blood of his few remaining men and a crumbling stone wall that has seen better days, he labours to stave off the sea-borne Stormriders who would destroy his lands.

Meanwhile, religious war has broken out all across these lands as the local cult of the Blessed Lady, who has stood firm for millennia against the assaults of the Stormriders, seeks to stamp out all rivals; a champion refuses to stand against the alien 'Riders' and takes up arms in rebellion; and a local magistrate innocently pursuing the mystery of a series of murders is brought to the very heart of a far larger and far more terrifying ancient crime that has stained the entire subcontinent.

Ian Cameron Esslemont has had to contend with his share of criticism and fanatic fandom when it comes to his co-created world of the Malazan Empire. Steven Erikson, who writes the main books for the series has established his fanbase and after 9 books it seems as solid as it ever was. That’s not to say there aren’t folks who have issues with the main series. I myself feel that the last two books were not of the same sort of caliber that the ones that came before it were. They are still good, but there is a bit too much rumination and abstract desription. All told, Erikson can do next to no wrong in the eyes of his fans. Those are awfully big shoes to fill for ICE (Ian Cameron Esslemont) when he started writing companion books in this world he co-created. The first such effort, NIGHT OF KNIVES, which concerns the infamous night when then Malazan emperor and mage Kellanved, and his assassin companion Dancer ascend and become quasi-gods of a fragment of the elder warren of Shadow. It was okay, but for me failed on a lot of fronts simply for not engaging me enough. His second effort, THE RETURN OF THE CRIMSON GUARD fixed a lot that was wrong with the first book. It was more engaging, with better characters and plotlines and it concerned the fabled, much-discussed, but seldom seen character of the Crimson Guard avowed enemies of the empire. It had a few issues, but really was superior in nearly every way, at least for me.

The third book from ICE, called STONEWIELDER (one of the names of the infamous, dissident commander of the Malazan forces first attempt to take the archipelago of Korel, Greymane) for me, solidifies this guy into the spot next to his more published friend. ICE does nearly everything right here in this book. Are there bits that kind of go nowhere and seem a little pointless? Yes, but they are still mostly interesting to read, with probably only one plotline that falls kind of flat and left me a tad annoyed. The rest of the plotlines certainly make up for it though. As well, the secrets about Korel, the Stormwall and the Malazan Empire’s footholds there are just staggering and by the time I reached the ending and the Stormwall is explained I kind of had a jaw drop (I didn’t see that coming) moment. The characters here are more interesting than in previous volumes, partly because they get fleshed out more from their parts in the second book (those that continue into this one that is) and partly because they are given something interesting to do. The Malazan 17th including main POV Suth are fun and easy to read about, as are the murder plotline with Bakune The Assessor, Iron Bars and Corlo on the Stormwall, the spectacular sea battle with Mare, Ivanr’s plotline is the only one that went nowhere for me, but it was still decent to read about (a pacifist Toblakai?). I also liked Kiska’s storyline (though disconnected to the whole) because of the appearance of a familiar character from the main books (though with a different name) and her interaction with him, and another…ahem…fisherman they meet in shadow.

I have very few complaints though, as this is every bit as good as a number of the main Erikson-penned Malazan volumes…and is even better than a few of them. I had a kind of Memories of Ice vibe while reading this, in that a few mysteries were explained, more were opened up and there was oodles and oodles to talk about afterward. The action is thrilling and visceral; the mysterious bits are significant without being overwrought; and the character relationships were everything I have come to expect from this world and the people who populate it.

Yes, STONEWIELDER is totally worth the hype surrounding it. This isn’t just another book that leads up to Erikson’s final Malazan book THE CRIPPLED GOD, but instead it acts as companion to that forthcoming volume and is in every way deserving of the early praise that was awarded to it.

Personally, I think this is ICE’s triumph. NIGHT OF KNIVES had a lot of issues, THE RETURN OF THE CRIMSON GUARD had less but still wasn’t the best, but in this third book I think ICE found his legs and is striding alongside his co-creator with his head held high.

A fantastic entry in the Malazan world and one that is not worth missing. Get out and order a copy today!
Posted by GunMetalBlue at 7:15 AM